This page can be viewed at http://www.historycommons.org/entity.jsp?entity=abdul_haq

Abdul Haq was a participant or observer in the following events:

The New York Times reports that tens of thousands of Islamic radicals from around the world have come to train in Afghanistan since the end of the Soviet-Afghan war, in order to bring the militant jihad struggle back to their home countries. There are dozens of training camps all over the country, with around 20 under control of warlord Gulbuddin Hekmatyar alone. (Weiner 3/13/1994) Even though bin Laden is living in Sudan at this time and has moved some training camps there, he also keeps some camps and guesthouses open in Pakistan and Afghanistan until he moves back to Afghanistan take direct control of them in 1996. (9/11 Commission 7/24/2004, pp. 63) A civil war that has raged non-stop since the Soviets left and the growing importance of the opium crop made Afghanistan into “essentially a lawless country. There is no civil law, no government, no economy—only guns and drugs and anger.” Abdul Haq, a politically moderate warlord, says, “For us, Afghanistan is destroyed. It is turning to poison, and not only for us but for all others in the world. If you are a terrorist, you can have shelter here, no matter who you are. Day by day, there is the increase of drugs. Maybe one day [the US] will have to send hundreds of thousands of troops to deal with that. And if they step in, they will be stuck. We have a British grave in Afghanistan. We have a Soviet grave. And then we will have an American grave.” (Weiner 3/13/1994)

February 2001: US Fails to Back Plan to Overthrow Taliban

Abdul Haq, a famous Afghan leader of the mujaheddin, convinces Robert McFarlane, National Security Adviser under President Ronald Reagan, that Haq and about 50 fellow commanders could lead a force to start a revolt against the Taliban in Southern Afghanistan. However, Haq wants to do this under the authority of Zahir Shah, the popular former king of Afghanistan, whom the US does not support. The CIA fails to give any support to Haq. Says one CIA official to McFarlane a few months later, “We don’t yet have our marching orders concerning US policy; it may be that we will end up dealing with the Taliban.” Haq goes ahead with his plans without US support, and is killed in October (see October 25, 2001). (Marshall 10/28/2001; McFarlane 11/2/2001)

Abdul Haq, a famous Afghan leader of the mujaheddin, returns to Peshawar, Pakistan, from the US. Having failed to gain US support, except for that of some private individuals such as former National Security Adviser Robert McFarlane, Haq begins organizing subversive operations in Afghanistan. (Marshall 10/28/2001; McFarlane 11/2/2001) He is later killed entering Afghanistan in October 2001, after his position is reportedly betrayed to the Taliban by the ISI. 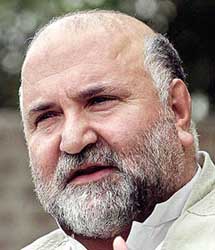 Abdul Haq. [Source: Abdul Haq Foundation]Abdul Haq, a leader of the Afghan resistance to the Taliban, is killed. According to some reports, he “seemed the ideal candidate to lead an opposition alliance into Afghanistan to oust the ruling Taliban.” (Burke 10/28/2001) Four days earlier, he had secretly entered Afghanistan with a small force to try to raise rebellion, but was spotted by Taliban forces and surrounded. He calls former National Security Adviser Robert McFarlane (who had supported him in the past) who then calls the CIA and asks for immediate assistance to rescue Haq. A battle lasting up to twelve hours ensues. (The CIA had previously rejected Haq’s requests for weapons to fight the Taliban, and so his force is grossly underarmed.) (Gordon and Weiner 10/29/2001) The CIA refuses to send in a helicopter to rescue him, alleging that the terrain is too rough, even though Haq’s group is next to a hilltop once used as a helicopter landing point. (Burke 10/28/2001; Marshall 10/28/2001) An unmanned surveillance aircraft eventually attacks some of the Taliban forces fighting Haq, but not until five hours after Haq has been captured. The Taliban executes him. (McFarlane 11/2/2001) Vincent Cannistraro, former head of the CIA’s Counter Terrorism Center, and others suggest that Haq’s position was betrayed to the Taliban by the ISI. Haq was already an enemy of the ISI, which may have killed his family. (Fard 10/26/2001; Slavin and Weisman 10/31/2001; Zielenziger and Tamayo 11/3/2001; Diebel 11/5/2001)