This page can be viewed at http://www.historycommons.org/entity.jsp?entity=abdulrahman_al_makhadi_1

Abdulrahman al-Makhadi was a participant or observer in the following events:

Late 1996 or After: Jarrah Associates with Monitored Hamas Fundraiser 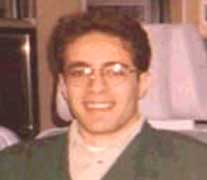 Ziad Jarrah on a plane. [Source: NDRTV]Within a few months of arriving in Germany, hijacker Ziad Jarrah begins to associate with Abdulrahman al-Makhadi, a local hardline Muslim who raises money for the militant Palestinian group Hamas and is monitored by the German intelligence service BfV. The German newspaper Frankfurter Allgemeine Zeitung will say that al-Makhadi, also known as Abu Mohammed, is “known to the [German security service] BfV as a Hamas activist and ‘instigator,’” and that, “It is therefore difficult to imagine that the 26 year old Lebanese [Jarrah] was not also registered by the machinery of the intelligence services.” Jarrah later travels around Germany with al-Makhadi and meets other radicals. Al-Makhadi runs the local mosque and makes money by selling special Arab food he purchases in Hamburg there. (Schrom and Laabs 2/2/2003; McDermott 2005, pp. 51)