This page can be viewed at http://www.historycommons.org/entity.jsp?entity=adel_nakhla_1

Adel Nakhla was a participant or observer in the following events: 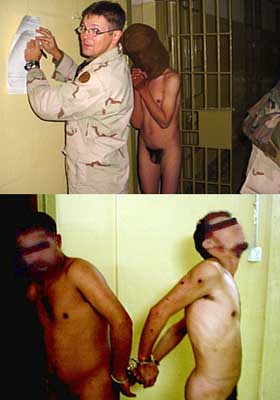 Top: Sgt. Evans fills out paperwork. A naked detainee and Adel Nakhla’s shoulder can also been seen. Bottom: Two naked detainees are cuffed together. [Source: Public domain]In the early morning hours of Dec. 6, more photographs are taken of naked detainees at Abu Ghraib prison. According to MP Charles Graner, some of them are OGA (other government agency) prisoners, which typically means CIA prisoners. In one picture, a medic known as Sgt. Evans fills out paperwork while one of these OGA detainees stands naked next to him. Adel Nakhla, a Titan Corp. interrogator, can also be partially seen. That evening, another photo shows two naked detainees cuffed together. One of them has what appear to be several cuts on his head and arm. (Scherer and Benjamin 3/14/2006)