This page can be viewed at http://www.historycommons.org/entity.jsp?entity=adil_shamoo_1

Adil Shamoo was a participant or observer in the following events:

December 14, 2008: Iraqi Journalist Insults Bush by Hurling Shoes at Him 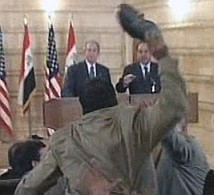 An Iraqi journalist hurls a shoe at President Bush. [Source: BBC]An Iraqi journalist throws a pair of shoes at President Bush during a press conference in Baghdad. In Arab culture, throwing shoes at a person, or showing them the sole of your shoe, is considered a grave insult—shoes are considered ritually unclean. During the conference, Muntadar al-Zaidi, a correspondent for Cairo-based al-Baghdadiya TV, stands up, shouts, “This is a goodbye kiss from the Iraqi people, dog!” and hurls the first shoe. He then shouts, “This is for the widows and orphans and all those killed in Iraq!” and hurls the second shoe. Bush ducks away from the thrown shoes, and both miss their target. Al-Zaidi is wrestled to the floor by security guards within seconds of throwing the second shoe, removed from the room and beaten, and taken into custody where he is soon arrested. Bush brushes aside the incident, telling the remaining journalists, “That’s what people do in a free society, draw attention to themselves,” as al-Zaidi’s screaming can be heard from outside the conference room. Bush flew to Baghdad for a surprise visit. During the momentary chaos after the shoes are hurled, his press secretary, Dana Perino, is struck in the eye with a microphone stand; the blow is accidental. Bush, in the last weeks of his presidency, says that the war in Iraq is not yet over, and more work remains to be done. He will later joke, “If you want the facts, it’s a size 10 shoe that he threw.” Other Iraqi journalists say the attack was symbolic, and note that Iraqis threw shoes and used them to beat statues of Saddam Hussein after his overthrow. Bush says being pelted with shoes may be one of the “weirdest” moments of his presidency. He is accompanied to the press conference by Iraqi Prime Minister Nouri al-Maliki. (Myers and Rubin 12/14/2008; BBC 12/15/2008; Asser 12/15/2008; Stone 12/15/2008) Bush later compares the incident to the disruption of an earlier White House press conference with Chinese President Hu Jintao by a Falun Gong follower, and says it would be wrong to read the feelings of an entire country into the single instance. “I don’t think you can take one guy and say this represents a broad movement in Iraq,” he says. He notes that the other Iraqi journalists in the room “were very apologetic and said this doesn’t represent the Iraqi people.” (Stone 12/15/2008)
Others' Reactions - A former colleague of Al-Zaidi, Haider Nassar, explains, “He had bad feelings about the coalition forces.” Of al-Zaidi’s actions, Nassar says it is a poor way to establish his points. “This is so silly; it’s just the behavior of an individual,” Nassar says. “He destroyed his future.” (Myers and Rubin 12/14/2008) Adil Shamoo, an Iraqi analyst at the Institute for Policy Studies in Washington, says of the incident: “I think we should go beyond the shoe and think about the fact that the US should respect Iraq’s sovereignty in order to regain respect of the Iraqi people and the Arab world. I think Bush has increased terrorism against the United States and instablity in the Middle East because of his policies.” (Al Jazeera 12/15/2008)
History of Shoes Used to Insult Americans - This is not the first time Iraqis have used shoes to insult American officials. Until the 2003 invasion, a likeness of Bush’s father, former President George H. W. Bush, was prominently featured in a floor mosaic near the front door of Baghdad’s Rashid Hotel; visitors would tread on it in symbolic punishment for alleged “war crimes” committed during the 1991 Gulf War. (The likeness has since been removed.) In 2004, the corpses of four American mercenaries killed and strung up on a bridge in Fallujah (see March 31, 2004) were beaten with shoes by local citizens. Posters of the current president, adorned with shoes, are common sights in many parts of Iraq and other Middle Eastern countries. And Secretary of State Condoleezza Rice has been given the insulting nickname of “Kundera,” meaning shoe, by many Middle Easterners. (Asser 12/15/2008; Stone 12/15/2008) In late January, an Iraqi orphanage will unveil a “shoe monument” in honor of al-Zaidi’s act (see January 29, 2009). Al-Zaidi will be freed from prison in September 2009 (see September 14, 2009).