This page can be viewed at http://www.historycommons.org/entity.jsp?entity=agency_for_international_development_1

US Agency for International Development (USAID) was a participant or observer in the following events:

Costa Rica’s newly elected president, Oscar Arias Sanchez, a foe of the Nicaraguan Contras, is outraged to learn of the deal made by his predecessor for a Contra airstrip in the northern portion of his country (see Summer 1985). He stops its use for Contra resupply. On September 6, 1986, CIA agent Felix Rodriguez, the liaison for National Security Council officer Oliver North in the region (see Mid-September 1985), informs North and CIA official Alan Fiers that Arias intends to hold a press conference denouncing the airstrip, revealing its construction by North’s partner, retired General Richard Secord, and announcing that its existence is a violation of Costa Rican law. North discusses the impending conference with Fiers, Assistant Secretary of State Elliott Abrams, and the US Ambassador to Costa Rica, Lewis Tambs. They mull over informing Arias that he will never be allowed in the White House, and will never get any of the $80 million promised to Costa Rica by the US Agency for International Development (USAID) if the airstrip is revealed. Tambs passes along these threats, and the press conference is initially canceled. Fiers later testifies (see July 17, 1991) that he, North, and Abrams are worried that the public revelation of the airstrip will expose the connections between the Contras, North, and the White House. (Final Report of the Independent Counsel for Iran/Contra Matters: Chapter 25: United States v. Elliott Abrams: November 1986 8/4/1993) In late September, Costa Rica will publicly reveal the existence of the airstrip (see September 25, 1986). 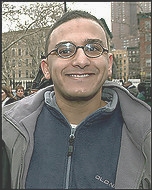 Abdallah Higazy. [Source: Washington Post]FBI agents arrest Egyptian national Abdallah Higazy in a New York hotel room, and interrogate him over his supposed ownership of an air-band transceiver capable of air-to-air and air-to-ground communications. The FBI suspects Higazy, a student at Brooklyn’s Polytechnic University, of facilitating the 9/11 hijackings. Higazy arrived in New York from Cairo to study engineering under US Agency for International Development (USAID) and Institute for International Education programs, in August 2001. The Institute arranged for Higazy to stay at the Millennium Hilton Hotel, just across the street from the World Trade Center. On September 11, Higazy, along with other hotel residents, was evacuated after the second plane hit the Twin Towers. He was carrying about $100 in cash and his wallet. Higazy does not return to the hotel until December 17, when three FBI agents are waiting for him. Hotel employees had found a transceiver capable of air-to-air and air-to-ground transmissions in his room safe, along with a Koran and his passport. The FBI believes that Higazy may have used the radio as a beacon to guide the hijackers. Higazy denies owning any such transceiver. A federal judge warns the FBI and federal prosecutors that merely finding a radio in a room safe occupied by Higazy does not constitute enough evidence to continue holding the suspect, and absent further evidence he will release Higazy on December 28. Instead, the FBI will browbeat a false confession from Higazy (see December 27, 2001). (Eggen 10/25/2007)

James Haveman, a 60-year old social worker and the director of a faith-based international relief organization, is recommended by the former Republican governor of Michigan, John Engler, to run Iraq’s health care system. Haveman earned Engler’s approval by running a large Christian adoption agency in Michigan that pushed pregnant women not to have abortions. Engler recommends Haveman to Paul Wolfowitz, the deputy secretary of defense; Haveman is soon dispatched to Baghdad to oversee the rebuilding of Iraq’s health-care system.
Replacing the Expert with the 'Loyalist' - Wolfowitz orders the immediate firing of Dr. Frederick Burkle, who worked the issue during the invasion. Unlike Haveman, Burkle has extensive experience in such areas: he has multiple degrees in public health, taught disaster-response issues at Johns Hopkins University, and is currently a deputy assistant administrator for the US Agency for International Development (USAID), who sent him to Baghdad in the days after the invasion. Burkle has extensive experience working in postwar climates such as Kosovo, Somalia, and Iraq after the 1991 Persian Gulf War. A USAID colleague will call him the “single most talented and experienced post-conflict health specialist working for the United States government.” However, Burkle lacks the Republican political connections. A USAID official tells Burkle that the White House wants a “loyalist” in the job, and Haveman fits the bill.
Anti-Smoking Campaigns, Fee-Based Care - Haveman’s tenure is marked by voluble recitations of how well the reconstruction is going: he tells anyone who will listen about how many Iraqi hospitals have reopened and about the pay raises Iraqi doctors have received. He refuses to discuss how decrepit most Iraqi hospitals still are, or the fact that many of Iraq’s best doctors are fleeing the country. Haveman mounts an aggressive anti-smoking campaign (and appoints a closet smoker to head it), ignoring comments that Iraqis have far bigger dangers in their lives than tobacco and recommendations that CPA funds might better be spent trying to combat fatal maladies running rampant through Iraqi populations. Haveman, a conservative ideologue, is offended by the idea that health care in Iraq is free. He institutes a fee-based health care system instead. Most importantly, he allocates almost all of the Health Ministry’s share of US reconstruction funds—some $793 million—to renovating Iraqi maternity hospitals and building community medical clinics. He later explains that his goal is “to shift the mind-set of the Iraqis that you don’t get health care unless you go to a hospital.” Unfortunately, his decision means that no funds are available to reconstruct emergency rooms and operating theaters in Iraqi hospitals, which are being overrun with injuries from insurgent attacks.
Privatizing the Drug Supply Distribution Process - Haveman opposes the idea of state-based drug and medical supply distribution on ideological grounds. Instead, he decides to privatize the dysfunctional government firm that imports and distributes drugs and medical supplies to Iraqi hospitals. When he served as Michigan’s director of community health, he dramatically cut the amount of money Michigan spent on prescription drugs for poor citizens by limiting the medications doctors could prescribe to Medicaid patients. He instituted a short list of cheaper drugs that poor patients were limited to using. Haveman decides that the same approach will work in Iraq. Currently, Iraq has around 4,500 drugs on its formulary, and Haveman decides the list is much too long. Any private firm who wants to bid on the job of supplying drugs and medical supplies will not want to deal with such a long list. Haveman also wants to restrict the firm to buying American-made drugs and supplies—no more medicines from Iran, Syria, or Russia. The Pentagon sends Haveman three formulary experts to help him implement his plan, including Lieutenant Commander Theodore Briski, a Navy pharmacist. Haveman’s order, as Briski later recalls, is “Build us a formulary in two weeks and then go home.” Two days into his position, Briski decides that Haveman’s plan is untenable. The existing formulary works well enough, he believes. Haveman wants to redesign “the entire Iraqi pharmaceutical procurement and delivery system, and that was a complete change of scope—on a grand scale.” Most importantly, Briski recalls, Haveman and his advisers “really didn’t know what they were doing.” Others agree, including many on Haveman’s team. Rewriting the formulary is a major distraction, they argue, as is privatizing the pharmaceutical distribution process. Haveman ignores the immediate needs of the populace for his grandiose, ill-considered plans.
No Progress - When Haveman leaves Iraq, the hospitals are as decrepit and dysfunctional as they were when he arrived. Baghdad’s largest medical facility, Yarmouk Hospital, lacks basic equipment to monitor blood pressure and heart rate. Operating rooms lack essential surgical tools and sterilizers. Pharmacy shelves are bare. The Health Ministry estimates that of the 900 drugs it deems essential, hospitals lack 40 percent of them. Of the 32 medicines used in combating chronic diseases, 26 are unavailable. Health Minister Aladin Alwan asks the United Nations for help, asks neighboring nations for emergency donations, and throws out Haveman’s idea for a new formulary. “We didn’t need a new formulary,” he later says. “We needed drugs. But the Americans did not understand that.” (Chandrasekaran 9/17/2006)