This page can be viewed at http://www.historycommons.org/entity.jsp?entity=ahmad_huber

Ahmad Huber was a participant or observer in the following events:

A Tunisian militant based in Italy named Sekseka Habib Waddani confesses to Italian police that he has helped run an elaborate arms smuggling ring, but it is unclear whether Italy or the US does anything to stop him. Waddani will be placed on the US Treasury Department’s list of most-wanted militants on August 29, 2002, but this “prompts questions about when the United States learned of Waddani, and whether any action was taken by Italian or US officials after Waddani’s claim that large amounts of weapons were being sold to Islamic terrorists.” When the CIA is asked in 2002 whether it did anything about Waddani, the agency will decline to comment.
Walk In - Waddani just walks in to a police station in Milan in 2000 and discloses the information, which he learned because he was involved when the weapons transited Italy and Switzerland. He approaches the police because he is being blackmailed and needs protection. The weapons smuggling scheme Waddani reports to the Italians initially involved smuggling the arms from Russia to Italy by sea, then to Croatia and on to Bosnia during the war there from 1992 to 1995. Weapons were also supplied to Albanian fighters in Kosovo in 1998. The deals were brokered by Italian and Muslim lawyers in Switzerland, who found buyers there. However, this system is abandoned as too difficult and the weapons—pistols, machine guns, missiles, and grenades—are then shipped through Uzbekistan to Pakistan for use at terrorist training camps in Pakistan, Iraq, and Afghanistan.
Companies Involved - Several European companies are involved in moving the arms, including one that handled transactions in Switzerland and is owned by a Pakistani named Haji Agka and two Swiss-based Tunisians, Ahmed and Shoyab Sharifi, and a front named the Mother Teresa of Calcutta Center of Lucerne. The two Tunisians are friends of Ahmad Huber, who reportedly facilitates “periodic and regular” weapons shipments and is accused of moving money for Osama bin Laden through the suspect Al Taqwa bank (see November 7, 2001). Huber denies the charges and, although the Italians passed the information on to Switzerland, says neither he nor any of his associates were ever even questioned about it. Waddani will be indicted in October 2001 in Italy, for trafficking in arms, explosives, chemical weapons, identity papers, receiving stolen goods, and illegal immigration. The Treasury Department will also say he is a member of the Salafist Group for Preaching and Combat (GSPC). (Komisar 9/16/2002)

Four members of the American delegation to the “First Conference on Jerusalem” (from right to left): Ahmed Yusef, Abdurrahman Alamoudi, Yaser Bushnaq, and Imad-ad-Dean Ahmad. [Source: Minaret of Freedom Institute] (click image to enlarge)Hundreds of the world’s most extreme Islamic militants attend an unprecedented conference in Beirut, Lebanon called “The First Conference on Jerusalem.” Participants include leaders of al-Qaeda, Hamas, Islamic Jihad, Hezbollah, and militants from Egypt, Pakistan, Jordan, Algeria, Sudan, Qatar, and Yemen. The conference is held with the purpose of uniting militant groups for holy war against Israel and the US. The participants create a new organization called “the Jerusalem Project,” with the goal of winning total Muslim control over Jerusalem. The participants produce a document which calls for a boycott on US and Israeli products and states, “The only decisive option to achieve this strategy [to regain Jerusalem] is the option of jihad [holy war] in all its forms and resistance… America today is a second Israel.” (Radler 6/22/2001; Cameron 5/17/2002) At least four of the attendees come from the US. One of them, Abdurahman Alamoudi, is a prominent lobbyist in the US for Muslim causes. Yet there is no indication Alamoudi faces any investigation in the US after attending this conference. In fact, in June 2001, Alamoudi will apparently take part in a meeting with Vice President Cheney at the White House for a briefing on the Bush administration’s domestic and foreign policies of interest to the American Muslim community. (Radler 6/22/2001; Jacoby 3/11/2003; Ahmad 2/8/2005) Another participant in the conference is Ahmad Huber, a director of the Al Taqwa Bank, which will be shut down in the months after 9/11 for suspected terrorism ties. Huber is known for his connections to both neo-Nazi and radical Muslim groups (see 1988). After 9/11, Huber will claim that he met some al-Qaeda leaders in this conference and will praise them for being “very discreet, well-educated, and very intelligent people.” (Williamson and Jaklin 11/8/2001; Reynolds 2/1/2002) Huber says that in the five years before 9/11, the bin Laden family sponsors Al Taqwa’s attendance at several international Muslim conferences, possibily including this one. He nonetheless claims the family is estranged from Osama bin Laden. (Le Monde (Paris) 5/3/2002) It has not been reported if Alamoudi met with Huber or any al-Qaeda leaders while at the conference. Alamoudi will later be sentenced to 23 years in prison in the US for illegal dealings with Libya (see October 15, 2004). 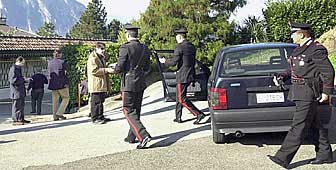 Italian police raid Youssef Nada’s villa in Lugano, Italy. [Source: Keystone]The US and other countries announce the closure of the Al Taqwa Bank and the Al Barakaat financial network. President Bush says, “Al Taqwa and Al Barakaat raise funds for al-Qaeda. They manage, invest and distribute those funds.” US officials claim that both entities skimmed a part of the fees charged on each financial transaction it conducted and paid it to al-Qaeda. This would provide al-Qaeda with tens of millions of dollars annually. Additionally, Al Taqwa would provide investment advice and transfer cash for al-Qaeda. Al Taqwa is based in Switzerland while Al Barakaat is based in Dubai, United Arab Emirates. Over 100 nations are said to be cooperating with efforts to block the funds of these two groups. (Sanger and Eichenwald 11/8/2001) Swiss authorities raid Al Taqwa-related businesses and the homes of bank leaders Youssef Nada, Ali Himmat, and Ahmad Huber, but no arrests are made. In January 2002, Nada will announce that the Al Taqwa Bank is shutting down, due to bad publicity after the raids. He will maintain that he and his organization are completely innocent. (Hosenball 11/7/2001; Reuters 1/10/2002) Days after 9/11, Huber called the 9/11 attacks “counterterror against American-Israeli terror,” the World Trade Center a “the Twin Towers of the godless,” and the Pentagon “a symbol of Satan,” yet he will claim to have no ties to the attackers. (Reynolds 2/1/2002; Hosenball 3/18/2002) In searching Nada’s house, Swiss authorities discover a document entitled “The Project,” which is a strategic plan for the Muslim Brotherhood to infiltrate and defeat Western countries (see December 1982). By late 2002, both the US and UN will declare Al Taqwa Bank, Nada, and Ahmed Idris Nasreddin, another founder and director of the bank, supporters of terrorism. All of their accounts will be declared frozen worldwide. (US Department of the Treasury 8/29/2002) However, while Al Taqwa itself will be shut down, later reports will indicate that other financial entities operated by the directors will continue to operate freely (see June-October 2005). 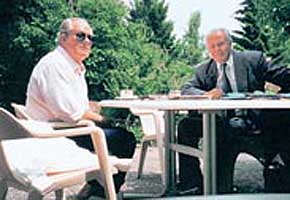 Ahmad Huber (left) with Jean Marie Le Pen (right), at Christian CambuzatÃ¢Â€Â™s spa in Switzerland. [Source: Blick]According to an article in a German newspaper, Ahmad Huber, one of the directors of the Al Taqwa Bank, regularly meets with important far right wing figures. The Al Taqwa Bank was banned after 9/11 for allegedly financing al-Qaeda, Hamas, and other Islamic militant groups (see November 7, 2001). Jean Marie Le Pen, leader of a far right wing political party in France that has at times received around 10% of the popular vote, frequently attends a very exclusive spa in Switzerland to improve his health. This spa is run by Christian Cambuzat, a supporter of Le Pen and other far right figures. Huber confirms that he has met Le Pen at this spa, and a picture of Huber and Le Pen together accompany the article. Other politicians who meet at the spa include Franz Schanhuber, founder of an extreme right wing party in Germany and former SS member, and Gianfrano Fini, an Italian neo-fascist known for his admiration of Benito Mussolini. An unnamed extreme right wing politician from the US is also said to attend meetings at this spa. (Sautter 4/26/2002)