This page can be viewed at http://www.historycommons.org/entity.jsp?entity=air_force_office_of_special_investigations_1

Air Force Office of Special Investigations was a participant or observer in the following events:

August or September 2002: Air Forces Investigation Concludes that Major, Accused of Espionage and Obstruction, Has Not Done Anything Wrong

The Air Force Office of Special Investigations completes its investigation into Major Douglas Dickerson’s relationship with the American-Turkish Council. The inquiry had been launched in response to allegations by FBI translator Sibel Edmonds that Dickerson’s wife was using her position as an FBI translator to shield certain targets working for the ATC from surveillance (see December 2, 2001 and Afternoon February 12, 2002). On September 10, 2002, Colonel James N. Worth, the Air Force’s director of inquiries, writes in a letter to Edmonds’ attorneys: “We have determined the allegations contained in your letter of August 7, 2002, involving Major Douglas Dickerson do not show improprieties and therefore do not warrant a formal inquiry” by the Air Force’s Office of the Inspector General (OIG). After conducting “a complete and thorough review,” he continued, the Office of Special Investigations could find “no evidence of any deviation from the scope of his duties. Absent new and relevant information we have closed this matter.” (Ridgeway 7/13/2004; Waterman 1/24/2005) Edmonds, who was never interviewed as part of the investigation, will continue to press for an investigation. In a September 19 letter to Joseph E. Schmitz, the Air Force’s Inspector General, Edmonds’ attorney will request that the OIG reopen the case and thoroughly investigate her charges. (Colapinto 9/19/2004) 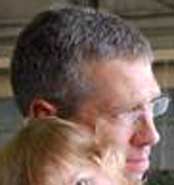 Douglas Dickerson. [Source: US Army]The Air Force’s Office of Special Investigation sends word to Sibel Edmonds’ attorney Mark Zaid that it is reopening the investigation into Edmonds’ former co-worker Melek Can Dickerson and her husband, Douglas Dickerson. Edmonds had warned her superiors in early 2002 that the couple was involved in espionage (see December 4, 2001). Journalist David Rose, who recently authored a lengthy piece on the Sibel Edmonds case for Vanity Fair magazine, believes the investigation may have been re-opened in part because of that article and because he submitted about 150 different questions about the case to the Air Force and other parts of the Pentagon, the Justice Department, and the FBI. (Democracy Now! 8/10/2005)