This page can be viewed at http://www.historycommons.org/entity.jsp?entity=ali_imron_1

Ali Imron was a participant or observer in the following events: 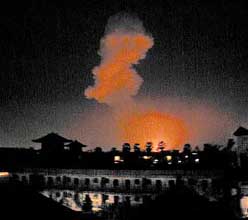 An explosion lights up the sky on the island of Bali, Indonesia. [Source: Agence France-Presse]A car bomb detonates in front of a discotheque at Kuta Beach, on the Indonesian resort island of Bali, starting a fire that rages through a dozen buildings. A backpack-mounted device carried by a suicide bomber explodes in another Kuta Beach discotheque. 202 people are killed and 209 are injured. Eighty-eight of those killed are Australian, while most of the rest are Indonesian. A much smaller device explodes outside the US consulate in nearby Denpasar, causing only minor damage and no casualties. No group claims responsibility, but Jemaah Islamiyah (JI), al-Qaeda’s main affiliate in Southeast Asia, is believed to be behind the bombings. (Bonner 10/13/2002; Mydans 10/14/2002; BBC 2/19/2003) Hambali, a key leader in both al-Qaeda and JI, is said to have been involved. He will be arrested in 2003 and taken into US custody (see August 12, 2003). (Simpson 12/7/2003) Three alleged JI operatives, Ali Gufron (a.k.a. Mukhlas), Imam Samudra, and Amrozi bin Nurhasyim, will be arrested in Indonesia and sentenced to death in 2003 for their roles in the Bali bombings. Ali Imron, brother to both Gufron and Amrozi, will be sentenced to life in prison. (Perlez 9/19/2003; Perlez 10/3/2003) JI operatives Dulmatin, Azhari Husin, and Noordin Mohammed Top also are said to have major roles in the bombings. Husin will be killed in a police shootout in 2005, while Dulmatin and Top remain at large (see October 6, 2005 and After). It will later turn out that the US was given a “stunningly explicit and specific” advanced warning that Hambali and JI were planning to attack nightclubs in Bali (see August 21, 2002).