This page can be viewed at http://www.historycommons.org/entity.jsp?entity=amanda_keller

Amanda Keller was a participant or observer in the following events: 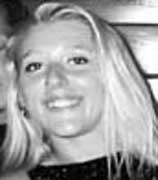 Amanda Keller. [Source: Unknown]A man, possibly Mohamed Atta, stays for a time at the apartment of a 21-year-old blonde-haired pizza restaurant manager named Amanda Keller. Keller lives in the Sandpiper Apartments in Venice, Florida, the same complex in which Atta reportedly shared a (presumably) separate apartment with Marwan Alshehhi and four others months earlier (see (Mid-July 2000 - Early January 2001)). Stephanie Frederickson, a resident at the Sandpiper Apartments, later remembers Keller and Atta. She claims Keller moved in next door to her. She goes on to say, “Then one day in the middle of March she brought home Atta.” Her recollection of Atta mirrors that of others. She will call him “a really nasty guy,” and say that he “had no patience, and seemed mad at the world.” Charles Grapentine, the manager of the Sandpiper Apartments, later recalls seeing Atta at the complex for about three weeks in April, and confirms that he was living with Keller. Keller’s mother, Susan Payne, also meets Atta and later says, “I didn’t like him; he just seemed strange.” As well as his stay at the Sandpiper Apartments, the man, possibly Atta, briefly rents a home in North Port. Its owners, Tony and Vonnie LaConca, know him only as “Mohamed.” They will be questioned in the days after 9/11 by the Florida Department of Law Enforcement (FDLE), and describe him as 25 years old, “very polite,” “very handsome,” and with “beautiful, unblemished skin.” From talking with “Mohamed” and Keller, the couple learns he is training for a commercial pilot’s license at Huffman Aviation, the Venice flight school attended by Atta in 2000 (see July 6-December 19, 2000). The Sarasota Herald-Tribune will claim that Keller’s companion is not Mohamed Atta, but another man of Middle Eastern descent who also took flying lessons in Venice. But authorities will refuse to reveal the full name of this “unidentified fifth man,” and investigators are reportedly unable to find him. (Allen-Emrich and Baty 9/14/2001; Grier 9/23/2001; Hopsicker 2004, pp. 57, 60-65 and 76) According to official accounts, plus the testimony of Huffman Aviation’s owner Rudi Dekkers, Atta left the Venice flight school around the end of 2000, months before “Mohamed” stays in the apartment of Keller. (US Congress 3/19/2002; US Congress 9/26/2002; 9/11 Commission 8/21/2004, pp. 17

) Investigative reporter Daniel Hopsicker later locates and interviews Amanda Keller, and she claims that the Middle Eastern man who was briefly her boyfriend was indeed Mohamed Atta (see March 2004). However, in 2006 she will retract this claim and say she lied to Hopsicker. She will say, “It was my bad for lying. I really didn’t think about it until after I did it.” (Allen 9/10/2006) Keller, Charles Grapentine, and Stephanie Frederickson will all later allege that the FBI intimidated them after 9/11, and told them to keep quiet about what they knew (see (September 12, 2001-2002)).

A number of witnesses who claim they saw Mohamed Atta living in Venice, Florida in early 2001 later allege that, in the aftermath of the 9/11 attacks, they are intimidated by the FBI and told to keep quiet about what they knew. Amanda Keller, who claims to have lived with Atta during early 2001 (see (February-April 2001)), later says that, even after she moved away from Venice, FBI agents called her every other day for several months after the attacks. She tells investigative reporter Daniel Hopsicker about “intimidation by the FBI” that she suffered, adding, “They told me not to talk to anybody, to keep my mouth shut.” Stephanie Frederickson, who remembers Keller and Atta living next door to her in the Sandpiper Apartments in Venice, later recalls, “At first, right after the attack, [the FBI] told me I must have been mistaken in my identification. Or they would insinuate that I was lying. Finally they stopped trying to get me to change my story, and just stopped by once a week to make sure I hadn’t been talking to anyone. Who was I going to tell? Most everyone around here already knew.” Charles Grapentine, the manager of the Sandpiper Apartments, also confirms Atta having lived with Keller. He says that, after 9/11, the FBI “called me a liar, and told me to keep my mouth shut.” (Hopsicker 2004, pp. 62-63, 65 and 88-89) According to the FBI’s account of events, Atta had left Venice by late December 2000 or early January 2001. Its account makes no mention of him returning there later. (US Congress 9/26/2002) A former manager at Huffman Aviation, the Venice flight school attended by Atta in late 2000 (see July 6-December 19, 2000), also later alleges that the FBI intimidated him and told him to keep quiet. He says the FBI was “outside my house four hours after the attack.” He claims his phones were bugged after 9/11, and adds, “I thought these guys [Atta and his associates] were double agents. Why is that so incriminating?” (Hopsicker 2004, pp. 149-150)

March 2004: Book Examines Atta’s Time in Florida; Portrays Him as Hooked on Drugs and Alcohol

Daniel Hopsicker. [Source: Daniel Hopsicker]A book examining the life of Mohamed Atta while he lived in Florida in 2000 is published. Welcome to Terrorland: Mohamed Atta and the 9-11 Cover-Up in Florida, is by Daniel Hopsicker, an author, documentary maker, and former business news producer. Hopsicker spent two years in Venice, Florida, where several of the 9/11 hijackers went to flight school, and spoke to hundreds of people who knew them. His account portrays Atta as a drinking, drug-taking, party animal, strongly contradicting the conventional view of Atta having been a devout Muslim. He interviewed Amanda Keller, a former stripper who claims to have briefly been Atta’s girlfriend in Florida. Keller describes trawls through local bars with Atta, and how he once cut up her pet kittens in a fit of anger. The book also alleges that the CIA organized an influx of Arab students into Florida flight schools in the period prior to 9/11, and that a major drug smuggling operation was centered around the Venice airfield while Atta was there. (Phalnikar 4/30/2004; Glenn 7/11/2005) It also implicates retired businessman Wally Hilliard, the owner of Huffman Aviation, as the owner of a Lear jet that in July 2000 was seized by federal agents after they found 43 pounds of heroin onboard. (Hicks 2/26/2004; Peerenboom 3/22/2004) The book is a top ten bestseller in Germany. (Hopsicker 2004; Phalnikar 4/30/2004)