This page can be viewed at http://www.historycommons.org/entity.jsp?entity=american_resistance_radio_1

American Resistance Radio (ARR) was a participant or observer in the following events: 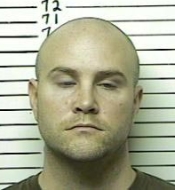 Charles Dyer after being detained by Oklahoma law enforcement authorities. [Source: Duncan Herald]Ex-Marine Charles Dyer is arrested on child rape and federal weapons charges. Dyer, a declared member of the “Oath Keepers” organization (see March 9, 2009 and March 2010), is charged with raping a seven-year-old girl at his home in Marlow, Oklahoma. When Stephens County deputies search his home, they find a Colt M-203 grenade launcher they believe was stolen from a California military base in 2006. Dyer’s arrest causes a split among members of the far-right “Patriot” movement, with militia members rallying behind Dyer and organizations such as the Oath Keepers distancing themselves from supporting him. Dyer was charged with making disloyal statements when, as an active-duty Marine, he posted what Mother Jones calls “incendiary videos on YouTube” under the moniker “July4Patriot.” Wearing a skull mask that partially obscured his face, he called for armed, violent resistance against the US government, railed against the “New World Order” (see September 11, 1990), and invited viewers to join him at his Oklahoma home for military training, at what he said the government “will call… a terrorist training camp.” Dyer was acquitted and continued making video protests and exhortations without the mask, becoming popular among fringe militia elements. In one video made after his discharge from service, he announced his intention of becoming a “domestic terrorist.” Dyer has been a visible and outspoken member of the Oath Keepers since the organization’s first rally, and for a time he was considered an Oath Keeper spokesman, and with Oath Keeper leader Stewart Rhodes’s blessing represented the group at a July 4, 2010 tea party rally. He often featured Oath Keeper logos and materials on his YouTube videos, and wore an Oath Keeper sweatshirt on some of them. Following Dyer’s arrest, Rhodes removes Dyer’s postings and material from the Oath Keepers Web site, and denies Dyer had any official connection with the group. Rhodes insists that Dyer never paid his $30 dues to become a member, though the organization has always said it costs nothing to join, and says he asked Dyer to stop identifying himself as an Oath Keeper after he learned that Dyer was trying to recruit for an Oklahoma militia. A blogger for American Resistance Radio calls Rhodes “beyond cowardly” and labels Dyer the “1st POW of the 2nd American Revolution.” On the Oath Keepers site, a Marine from Arizona speculates that the charges against Dyer could be the start of a false campaign to arrest and detain American patriots. But if the allegations are true, he writes, “may he rot in hell.” (Booth 1/16/2010; Mother Jones 1/22/2010; Keller 1/22/2010; Roth 1/22/2010; Sharrock 3/2010)