This page can be viewed at http://www.historycommons.org/entity.jsp?entity=anthony_swofford_1

Anthony Swofford was a participant or observer in the following events: 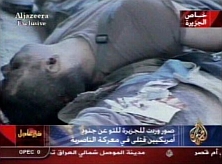 A photo of a slain US soldier as broadcast on Al Jazeera. [Source: Al Jazeera / TheWE (.cc)]With the first broadcast of graphic, disturbing images from the Iraq war on Al Jazeera television news shows, the media coverage of the US strike begins turning away from what media critic Frank Rich will later call “cheerleading” (see March 19-20, 2003) to a more somber assessment of the events taking place in Iraq. Defense Secretary Donald Rumsfeld, appearing on CBS’s Face the Nation, is embarrassed when host Bob Schieffer shows part of an Al Jazeera film clip of US troops being killed. (The Pentagon is also denying media reports that around ten US soldiers were either captured or missing. The juxtaposition is inopportune for Rumsfeld and the “shock and awe” story he and the Defense Department wish to tell.) The Pentagon will quickly decide that for the US media to show such images violates “the principles of the Geneva Conventions” and attempt to stop them from being shown in the American press. The Pentagon’s proscription of such images being published and broadcast is only partially successful. ABC news anchor Charles Gibson engages in an on-air discussion of the propriety of airing such images with reporter Ted Koppel. Gibson says to broadcast such disturbing images would be “simply disrespectful,” a point with which Koppel, embedded with the Third Infantry Division, disagrees. The news media is “ginning up patriotic feelings” in covering the war, Koppel says: “I feel that we do have an obligation to remind people in the most graphic way that war is a dreadful thing.… The fact of the matter is young Americans are dying. Young Iraqis are dying. And I think to turn our faces away from that is a mistake.… To sanitize it too much is a dreadful mistake.” However, Koppel’s is not a popular argument. CNN decided at the onset of the war to minimize its broadcast of graphic imagery in deference to “the sensibilities of our viewers.” The other US television news outlets make similar decisions, leaving it to the BBC and other non-American news organizations to show what Rich calls “the savagery and blood of warfare.” Ex-Marine Anthony Swofford, who wrote the bestseller Jarhead about his experiences during the 1991 Gulf War, later says the television coverage is so sanitized that he quickly shut off his TV “and stayed with the print.… [T]he actual experience of combat doesn’t make it to the other side of the screen.” (Rich 2006, pp. 76)