This page can be viewed at http://www.historycommons.org/entity.jsp?entity=arielle_garcia_1

Arielle Garcia was a participant or observer in the following events: 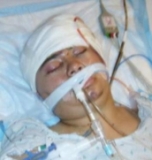 From left to right: Matthew Nestor, William Moyer, and Jason Hayes. [Source: Pottsville Republican-Herald]Five people, including three police officers, face federal charges in the murder of illegal immigrant Luis Ramirez (see July 12, 2008 and After). The four teenagers who beat Ramirez to death were acquitted of all but minor charges by an all-white jury (see May 2, 2009 and After). Two indictments charge the five with federal hate crimes, obstruction of justice, and conspiracy, in what authorities say was a racially motivated attack. The indictments are against two of the defendants in the murder trial, Brandon Piekarsky and Derrick Donchak, and three police officers: Shenandoah Police Chief Matthew Nestor, Lieutenant William Moyer, and Officer Jason Hayes. Donchak and Piekarsky face a maximum penalty of life in prison plus additional time. Donchak is accused of conspiring with Nestor, Moyer, and Hayes to orchestrate a cover-up of the crime. The three officers face obstruction of justice charges, and Moyer faces charges of witness and evidence tampering, and of lying to the FBI. According to the indictments, Nestor, Moyer, and Hayes intentionally failed to “memorialize or record” statements made by Piekarsky about the incident, and “wrote false and misleading official reports” that “intentionally omitted information about the true nature of the assault and the investigation.” The officers face up to 20 years in prison on each of the obstruction counts. Moyer faces additional jail time if convicted of lying to the FBI. At the time of the murder, Hayes was dating Piekarsky’s mother, and Moyer’s son was a high school student who played football with the defendants. One of the charges involves false reports that an eyewitness, Arielle Garcia, reported that it was Brian Scully (see May 18, 2009), and not Piekarsky, who delivered the fatal kick to Ramirez’s head. Subsequent investigation determined that Piekarsky delivered the killing blow. (CNN 12/15/2009; Philadelphia Weekly 12/15/2009; Bortner 1/28/2011) Piekarsky and Donchak will be convicted of violating Ramirez’s civil rights. Nestor and Moyer will be convicted of lesser charges, and Hayes will be acquitted entirely (see January 27, 2011).