This page can be viewed at http://www.historycommons.org/entity.jsp?entity=barbara_mikulski_1

Barbara Mikulski was a participant or observer in the following events: 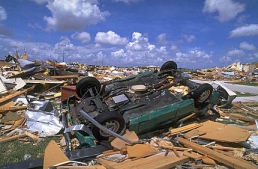 Damage from Hurricane Andrew, in Dade County, Florida. [Source: Greenpeace]Approximately three years after facing harsh criticism for its response to Hurricane Hugo (see September-November 1989), the Federal Emergency Management Agency (FEMA) is denounced for not providing adequate relief in the wake of Hurricane Andrew. The storm, which devastates regions of southern Florida and Louisiana, claims dozens of lives, leaves up to a quarter million people temporarily homeless, and causes more than $26 billion in damage. (National Hurricane Center 12/10/1993; National Hurricane Center 8/1/2005) Nearly a week after Andrew passes, local officials and citizens in the hardest hit areas are still waiting for assistance from the federal government. Days after the storm, the New York Times reports it is still “unclear just who is in charge of the Federal relief effort.” (Andrews 8/27/1982) “Blame for the government’s delayed response to Hurricane Andrew is being placed squarely at the feet of the Federal Emergency Management Agency,” the Associated Press reports. Even after FEMA moves in, relief is delayed by a lack of resources and bureaucratic red tape. (Associated Press 8/29/1992) In some cases, the agency brings equipment designed for a nuclear war instead of basic supplies. When the city manager of Homestead, Florida, requests 100 hand-held radios, FEMA is only able to provide high-tech mobile command vehicles (see 1982-April 1994). As Cox News Service will later report: “FEMA sent high-tech vans, capable of sending encrypted, multi-frequency radio messages to military aircraft halfway around the world.… FEMA equipment could call in an air strike but Homestead never got its hand-held radios.” Franklin, Louisiana, which is reportedly “flattened” by the storm, is similarly offered a communications vehicle instead of basic relief. “They offered a mobile communications unit and I told them that was unacceptable,” says Representative Billy Tauzin (D-LA). Senator Barbara Mikulski (D-MD) says the government’s response to the storm is “seen by many of Hurricane Andrew’s victims in Florida as a disaster itself.” Unbeknown to most of the public and government, FEMA is secretly preoccupied with preparations for a nuclear doomsday (see April 1, 1979-Present). (Associated Press 8/29/1992; Cox News Service 2/22/1993) 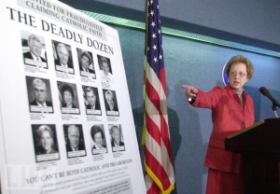 ALL president Julie Brown points to her organization’s ‘Deadly Dozen’ poster. [Source: Life Magazine]A new advertising and poster campaign attacking pro-choice Catholic senators harks back to the dangerous “Deadly Dozen” campaign of 1995 (see 1995 and After), according to pro-choice advocates. The 1995 advertising and poster campaign targeted over a dozen health care and abortion providers, usually listing their names, addresses, and telephone numbers. The new campaign is by the American Life League (ALL—see 1979), an anti-abortion organization centered in Stafford, Virginia. Both the 1995 and the current campaigns feature “Old West” themed posters. ALL’s posters provide photographs of a dozen pro-choice US senators under the announcement, “Wanted For Fradulently Claiming Catholic Faith”; like the earlier campaign, the senators are branded as “The Deadly Dozen.” The senators pictured include Ted Kennedy (D-MA), Tom Daschle (D-SD), John Kerry (D-MA), and Barbara Mikulski (D-MD). The campaign calls for bishops to refuse communion to the senators. Vicki Saporta of the National Abortion Federation says she is appalled by ALL’s choice of slogans. “This type of language is associated with violence,” she says. “Seven people lost their lives as a result of this type of verbiage. What is the American Life League thinking?” The new ad campaign is running in selected newspapers, including the Washington Times and The Wanderer, a weekly Catholic newspaper in Massachusetts. A new round of posters is planned, targeting, among others, Governor Gray Davis (D-CA) of California and other California pro-choice lawmakers, according to ALL official Joseph Giganti. Giganti says ALL is opposed to violence and calls comparisons between his organization’s campaign and the 1995 campaign “reckless and careless.… Our ads don’t refer to being wanted dead or alive; it is referencing the fact abortion kills. We are simply saying, if you are in fact Catholic, how can you continue to support abortion?” Giganti blames pro-choice groups for “purposely… misinterpret[ing]” the campaign and using it “as a stepping stone to voice their own opinions.” At least 11 Catholic diocesan newspapers have turned down the ads. “The kind of advertising they are doing is inflammatory,” says Frances Kissling, president of Catholics for a Free Choice. “It could incite someone, set someone off. But the more dominant issue is that they will disgust people. This ad will only reinforce pro-choice. People who have mixed feelings about abortion, people who are moderates will be turned off by the advertisements.” A spokesman for one targeted senator, Christopher Dodd (D-CT), says of the campaign: “There is no place in America for personal attacks on those with whom one disagrees. Ultimately, Senator Dodd’s religious views are a personal matter between him and God.” (Life 1/22/2003; Smith 4/21/2003)

April 2005: FBI Director Says NSA ‘Generally’ Not Allowed to Spy on US Citizens

Robert Mueller, the director of the FBI, answers the following question during testimony before the Senate: Barbara Mikulski (D-MD) asks Mueller and Attorney General Alberto Gonzales, “Can the National Security Agency, the great electronic snooper, spy on the American people?” Mueller replies, “I would say generally, they are not allowed to spy or to gather information on American citizens.” (Risen and Lichtblau 12/15/2005)

September 13, 2010: Anti-Abortion Group Launches Next Round of ‘Deadly Dozen’ Ads 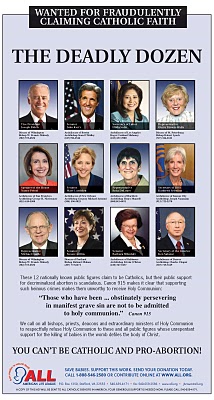 ALL’s ‘Deadly Dozen’ poster. [Source: Pro Ecclesia (.com)]The anti-abortion advocacy organization American Life League (ALL) releases another in a series of “Deadly Dozen” ad campaigns. The first, in 1995, targeted a dozen abortion and health care providers, and was subsequently blamed for a spate of deadly violence against those named in the ads (see 1995 and After). In 2003, ALL launched a second “Deadly Dozen” campaign, this time targeting US senators (see January - April 2003). The current round of ads features a poster listing a dozen Catholic lawmakers, including members of Congress and of the Obama administration. The list includes Vice President Joseph Biden (D-DE); Secretary of Labor Hilda Solis; Secretary of Health and Human Services Kathleen Sebelius; Interior Secretary Ken Salazar; Senators John Kerry (D-MA), Mary Landrieu (D-LA), Susan Collins (R-ME), and Barbara Mikulski (D-MD); and Representatives Ginny Brown-Waite (R-FL), Nancy Pelosi (D-CA), Rosa DeLaurio (D-CT), and Mike Castle (R-DE). As with ALL’s 2003 campaign, the current campaign calls on the named lawmakers’ community bishops to deny them communion. The ad concludes with the slogan, “You can’t be Catholic and pro-abortion!” A blogger in Delaware reports seeing the poster in the vestibule of his church. (Jay Anderson 9/13/2010)

Five men, including several conservative religious leaders, testified before a House committee on female contraception issues. No women were allowed to testify. The Senate later blocks a bill restricting contraception from passing. [Source: Twitter / London Daily Mail]The Senate votes down the controversial “Blunt amendment” 51-48, on a nearly party-line vote. The amendment, offered by Senator Roy Blunt (R-MO) as a rider to a routine highway bill and co-sponsored by Senate Minority Leader Mitch McConnell (R-KY) and 22 other senators, would have allowed health care providers to refuse to pay for contraception and other health care procedures on religious or moral grounds. If the amendment had passed, health insurance plans and employers could refuse to provide or pay for coverage of “specific items or services” if the coverage would be “contrary to the religious beliefs or moral convictions of the sponsor, issuer, or other entity offering the plan.” Blunt and the bill’s supporters characterize the legislation as an attempt to restore religious freedoms taken away by the Obama administration’s “government health care takeover,” in Blunt’s words; opponents say the bill is an attack on women’s rights and an effort to ban contraception. Blunt said during the debate of the bill: “This amendment does not mention any procedure of any kind. The word ‘contraception’ is not in there because it’s not about a specific procedure. It’s about a faith principle that the First Amendment guarantees.” McConnell says the bill is an attempt to fight for “religious liberty,” which he and others say is under attack by the White House and Congressional Democrats. The Obama administration’s health care policy requires organizations to cover the cost of contraception, but does not require religious establishments to cover the cost. Employees of religious establishments can still obtain contraception from the health care insurance company. Mitt Romney (R-MA), a Republican presidential candidate, first stated his opposition to the bill, then quickly reversed course and said he was for it. The only Senate Republican to vote against the bill is Olympia Snowe (R-ME), widely considered a moderate Republican; three conservative Democrats vote for the bill. Senator Marco Rubio (R-FL), considered a strong candidate to run as the Republican vice-presidential nominee in the 2012 elections, says the Senate’s refusal to pass the bill is “a setback for religious freedoms in America.” Senator Charles Schumer (D-NY) calls the bill a straightforward effort to ban contraception. Senator Kirsten Gillibrand (D-NY) wrote in a recent op-ed, “Instead of coming together to fix our economy and strengthen the middle class, the Senate is considering a measure so extreme that it would allow any employer—religious or secular—to deny their employees coverage of any preventive service, including contraception, mammograms—anything the employer deems unfit to be covered.” Senator Patty Murray (D-MA) says, “The Senate will not allow women’s health care choices to be taken away from them.” Senator Barbara Mikulski (D-MD) says Republicans are attacking women’s health care as part of “a systematic war against women.” Secretary of Health and Human Services Kathleen Sebelius had asked the Senate to reject the proposal, saying, “The Obama administration believes that decisions about medical care should be made by a woman and her doctor, not a woman and her boss.” Dr. Hal C. Lawrence of the American Congress of Obstetricians and Gynecologists came out against the amendment, saying contraception “improves and saves babies’ lives, improves maternal health, and can be life-saving for women with serious medical problems.” The American Cancer Society released a statement opposing the amendment, saying it would allow employers to deny coverage of life-saving preventive services like mammograms and smoking cessation programs based on “undefined religious beliefs or moral convictions.” (Pear 3/1/2012; The State 3/1/2012; The Week 3/2/2012) After the bill is voted down, conservative talk show host Rush Limbaugh vilifies Georgetown University law student Sandra Fluke, who was not allowed to testify before a House committee meeting debating the bill (Volsky 2/16/2012) , calling her a “slut” and a “prostitute” for advocating the free availability of contraception (see February 29, 2012). Fluke gave her testimony before a panel of House Democrats and posted it on YouTube, where she discussed the needs of young women who use birth control and other contraceptives for medical needs such as cancer prevention. Specifically, she cites the example of a friend who needed, and was unable to obtain, birth control pills to manage polycystic ovarian syndrome. (Beadle 2/16/2012) Democrats and others criticized committee chairman Darrell Issa (R-CA) for only allowing men to testify before the House Oversight Committee on the topic of female contraception. It was Issa’s decision to bar Fluke from testifying before the committee. House Minority Leader Nancy Pelosi (D-CA) said at the time: “The Republican leadership of this Congress thinks it’s appropriate to have a hearing on women’s health and purposely exclude women from the panel. I may at some point be moved to explain biology to my colleagues.” Issa only allowed committee Democrats to name one witness; they named Fluke, whom Issa barred from testifying as she was “unqualified” to speak. (Daily Mail 2/17/2012)