This page can be viewed at http://www.historycommons.org/entity.jsp?entity=basman_elashi

Basman Elashi was a participant or observer in the following events: 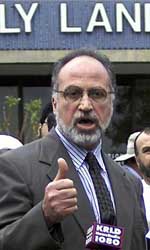 Ghassan Elashi holds a press conference and denies any connection to terrorist funding. [Source: Associated Press]Mousa Abu Marzouk, his wife, and five brothers (Ghassan Elashi, Bayan Elashi, Hazim Elashi, Basman Elashi, and Ihsan Elashi) are charged with conspiracy, money laundering, dealing in the property of a designated terrorist, illegal export, and making false statements. The brothers are arrested in Texas, but Marzouk and his wife are living in Syria and remain free. Marzouk is considered a top leader of Hamas. FBI agent Robert Wright had been investigating Marzouk and the brothers since the late 1990s. Wright is set to appear on ABC News on December 19, 2002, to complain that the FBI had failed to prosecute Marzouk for years. As the New York Post notes, “That got results: A day before the show aired, Attorney General Ashcroft announced he would indict Marzouk.” (BBC 12/18/2002; Brown 12/18/2002; Mintz 12/19/2002; Schlussel 7/14/2004) FBI agent John Vincent, who worked closely with Wright, comments, “From within the FBI, [Wright] and I tried to get the FBI to use existing criminal laws to attack the infrastructure of terrorist organizations within the United States, but to no avail. It took an appearance [on television] by [Wright] and I to propel them into making arrests that they could have made as early as 1993.” (Federal News Service 6/2/2003) ABC News similarly notes, “Marzouk was in US custody in 1997 and under criminal investigation then for much the same crimes cited today.” (Ross 12/18/2002) Ghassan Elashi was the vice president of InfoCom Corporation, which was raided on September 5, 2001 (see September 5-8, 2001). He was also chairman of Holy Land Foundation, which was shut down in December 2001. InfoCom and Holy Land were based in the same Texas office park and shared many of the same employees. (Whitaker 9/10/2001; CBS News 12/18/2002; Associated Press 12/23/2002) Holy Land raised $13 million in 2000 and claimed to be the largest Muslim charity in the US. The government charges that Hamas members met with Ghassan Elsashi and other Holy Land officials in 1993 to discuss raising money for the families of suicide bombers (see October 1993). Wright had begun an investigation into Holy Land that same year, but he faced obstacles from higher-ups and eventually his investigation was shut down. (CBS News 12/18/2002; Lichtblau 7/28/2004) In 2004, the five Elashi brothers will be convicted of selling computer equipment overseas in violation of anti-terrorism laws. In 2005, three of the brothers, Ghassan, Basman, and Bayan Elashi, will be found guilty of supporting Hamas by giving money to Mazouk through 2001. (BBC 7/8/2004; Associated Press 4/13/2005) In July 2004, Ghassan Elashi will be charged again, along with four other former Holy Land officials. Two other Holy Land officials will also charged but not arrested, since they had recently left the country. Sen. Charles Schumer (D-NY) will state: “I wonder why this prosecution has taken so long. I think until recently we have not put the resources needed into tracking groups that finance terrorism, and the fact that they didn’t get 24-hour surveillance on these two who escaped is galling and perplexing.” (Lichtblau 7/28/2004) In 2007, this court case will result in a mistrial, and be cast as a major setback for the Justice Department (see October 19, 2007).