This page can be viewed at http://www.historycommons.org/entity.jsp?entity=ben_cardin_1

Ben Cardin was a participant or observer in the following events:

Michael Mukasey. [Source: US Department of Justice]After two months of controversy, and a round of sporadically contentious Senate confirmation hearings, former judge Michael Mukasey narrowly wins the Senate’s approval to become the next attorney general, by an almost-party line 53-40 vote. Musakey replaces Alberto Gonzales, who resigned under fire in September 2007. Many Democrats vote against Mukasey because of his refusal to categorize the interrogation technique of waterboarding as torture, and his refusal to say that he would oppose President Bush’s insistence on eavesdropping on US citizens. Some Democrats took comfort in Mukasey’s characterization of waterboarding as “repugnant,” but others were not pleased by his refusal to say that the practice constitutes torture. Two key Democrats on the Senate Judiciary Committee, Charles Schumer (D-NY) and Dianne Feinstein (D-CA) refused to block Mukasey from going to the Senate for a confirmation vote. Both indicated that they reluctantly supported Mukasey’s nomination because the Justice Department needs an immediate infusion of leadership—Schumer called the department “adrift and rudderless” and in need of “a strong and independent leader”—and they feared if Mukasey was not confirmed, President Bush would put someone worse in the position as an interim appointment. (CNN 11/8/2007) Schumer says he eventually decided to vote for Mukasey after the judge said “if Congress passed further legislation in this area, the president would have no legal authority to ignore it and Judge Mukasey would enforce it.” But Schumer’s colleague, Ted Kennedy (D-MA), is unimpressed. “Enforcing the law is the job of the attorney general,” Kennedy says. “It’s a prerequisite—not a virtue that enhances a nominee’s qualifications.” Ben Cardin (D-MD) wonders just how far, and how specifically, Congress will have to go to outlaw torture. He asks, “Are we going to have to outlaw the rack because there’s a question whether the rack is torture in this country?” (National Public Radio 11/7/2007) Arlen Specter (R-PA), the committee’s ranking Republican, calls Mukasey “ethical, honest [and] not an intimate of the president.” (CNN 11/8/2007) Mukasey is quietly sworn in only hours after winning the Senate vote. (National Public Radio 11/9/2007) All four Democratic senators running for president—Hillary Clinton (D-NY), Barack Obama (D-IL), Joseph Biden (D-DE), and Christopher Dodd (D-CT)—have said they oppose Mukasey’s nomination. Obama calls Mukasey’s refusal to label waterboarding as torture “appalling,” and notes that Mukasey’s belief that the president “enjoys an unwritten right to secretly ignore any law or abridge our constitutional freedoms simply by invoking national security” disqualify him for the position. The other candidates make similar statements. (Fox News 10/30/2007) However, none of them actually show up to cast their vote for or against Mukasey. John McCain (R-AZ), another senator running for president, also does not vote. (Kellman 11/8/2007) Three days after Mukasey’s confirmation, the New York Times writes a blistering editorial excoriating both the Bush administration and the compliant Senate Democrats for allowing Mukasey to become attorney general (see November 11, 2007). 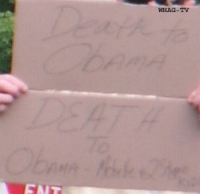 A protester displays a handmade sign advocating “Death to Obama” and to his family. [Source: WHAG-TV]At a “town hall” meeting to discuss health care reform, Senator Ben Cardin (D-MD) is plagued with “almost non-stop” hecklers who “hoot and holler” at his every statement, according to the Baltimore Sun. Outside the town hall, an opponent of health care reform holds a small, handwritten sign that says: “Death to Obama. Death to Obama—Michelle and 2 stupid kids.” (The man is detained by Secret Service agents.) The event, held at Towson University, is packed with anti-reform protesters, who regularly outshout those who have come to support Cardin and health care reform. Cardin is a proponent of the Democrats’ health care reform efforts. “I know some of you don’t want me to mention the facts, but listen to the facts,” he says towards the beginning of the event, drawing screams and catcalls from the protesters. Cardin’s every statement is greeted with jeers and shouts, and protesters break “into raucous cheers” when their fellows yell dismissive or abusive remarks towards him. According to the Sun reporters in attendance, Cardin keeps calm throughout the event. His statements that illegal immigrants would not be given coverage under the plan receives some of the heaviest levels of profane jeering and booing; in contrast, one of the longest and loudest ovations comes when an audience member asks why tort reform is not part of the reform plan. When one audience member asks if Cardin will put himself under a public plan, he retorts: “I’m in a public plan. It’s called Medicare.” Cardin is protected throughout the event by a large number of uniformed university security officers. About 500 people make their way inside; hundreds more are turned away and conduct their own protests, arguments, disputes, and screaming matches outside the venue. One supporter tells a reporter: “I guess we’re going to rally and scream at each other. It’s ridiculous, but you can’t just have one side control the whole discussion.” One protester, carrying a sign reading “Obama Lies, Seniors Die” (see November 23, 2008, January 27, 2009, February 9, 2009, February 11, 2009, February 18, 2009, May 13, 2009, June 24, 2009, June 25, 2009, July 10, 2009, July 16, 2009, July 17, 2009, July 21, 2009, July 23, 2009, July 23, 2009, July 23, 2009, July 23-24, 2009, July 24, 2009, July 28, 2009, July 28, 2009, July 28, 2009, July 31, 2009 - August 12, 2009, August 6, 2009, August 7, 2009, August 10, 2009, August 10, 2009, Shortly Before August 10, 2009, and August 11, 2009), tells reporters, “I’m not a mob.” Cardin addresses the “euthanasia” issue in the venue, assuring the audience, “There would be nothing in a health overhaul plan about terminating people’s care at the end of life.” He then adds, “And by the way, President Obama is also a citizen of the United States.” (West and Scharper 8/11/2009; MSNBC 8/13/2009; Dishneau 8/13/2009)