This page can be viewed at http://www.historycommons.org/entity.jsp?entity=bob_simon_1

Bob Simon was a participant or observer in the following events:

Bob Simon. [Source: CBS News]Veteran CBS war correspondent Bob Simon discusses the media’s enthusiasm for a war with Iraq before the March 2003 invasion, and its credulity, with PBS host Bill Moyers. (Moyers 4/25/2007) CBS News describes Simon as “the most honored journalist in international reporting.” A regular contributor to CBS’s flagship news program 60 Minutes, Simon has won 18 Emmy awards and a Lifetime Achievement Emmy in September 2003. (CBS News 6/8/2007) He did one of the first broadcast news examinations of the Bush administration’s propaganda efforts to sell the war with Iraq to the American public. (Simon 12/6/2002) Simon says that foreign journalists had a perspective that Washington-based journalists did not. “From overseas we had a clearer view,” he explains. “I mean we knew things or suspected things that perhaps the Washington press corps could not suspect. For example, the absurdity of putting up a connection between Saddam Hussein and al-Qaeda.” Moyers asks: “Absurdity. The Washington press corps cannot question an absurdity?” Simon replies: “Well, maybe the Washington press corps based inside the belt wasn’t as aware as those of us who are based in the Middle East and who spend a lot of time in Iraq. I mean when the Washington press corps travels, it travels with the president or with the secretary of state… [i]n a bubble. Where as we who’ve spent weeks just walking the streets of Baghdad and in other situations in Baghdad just were scratching our heads. In ways that perhaps that the Washington press corps could not.” Simon and his camera crew had been captured and brutalized by Hussein’s forces for 40 days during the 1991 Gulf War, and, Moyers notes, Simon “was under no illusions about Saddam Hussein.… It didn’t make sense to Simon that the dictator would trust Islamic terrorists.” Simon explains his reasoning: “Saddam as most tyrants, was a total control freak. He wanted total control of his regime. Total control of the country. And to introduce a wild card like al-Qaeda in any sense was just something he would not do. So I just didn’t believe it for an instant.” (Moyers 4/25/2007) 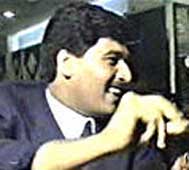 Rafid Ahmed Alwan. [Source: CBS News]CBS News reveals the identity of the infamous Iraqi defector, “Curveball,” whose information was used by the Bush administration to build its case for Iraqi biological weapons. Curveball’s real identity is Rafid Ahmed Alwan, an Iraqi who defected to Germany in November 1999, where he requested asylum at a refugee center near Nuremberg (see November 1999). The evidence Curveball provided was detailed, compelling, and completely false, but instrumental in driving the US towards invading Iraq. Former senior CIA official Tyler Drumheller, who was unable to convince either his superiors in the agency or senior officials in the White House that Curveball was untrustworthy (see September 2002), says of Curveball’s contribution to the rhetoric of war, “If they [the Bush administration] had not had Curveball they would have probably found something else. ‘Cause there was a great determination to do it. But going to war in Iraq, under the circumstances we did, Curveball was the absolutely essential case.” CBS reporter Bob Simon says Curveball is “not only a liar, but also a thief and a poor student instead of the chemical engineering whiz he claimed to be.” The CIA eventually acknowledged Alwan as a fraud. The question remains, why did he spin such an elaborate tale? Drumheller thinks it was for the most prosaic of reasons. “It was a guy trying to get his Green Card, essentially, in Germany, playing the system for what it was worth. It just shows sort of the law of unintended consequences.” Alwan is believed to be still living in Germany, most likely under an assumed name. (CBS News 11/4/2007)