This page can be viewed at http://www.historycommons.org/entity.jsp?entity=bruce_lawrence_1

Bruce Lawrence was a participant or observer in the following events: 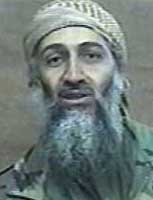 Osama bin Laden making his “Nineteen Students” speech. [Source: Al Jazeera]Osama bin Laden makes a new video statement about 9/11, again denying the US has enough evidence against him to warrant an attack on Afghanistan (see September 16, 2001 and September 28, 2001), which he calls “a vicious campaign based on mere suspicion.” However, in what Professor Bruce Lawrence calls “his most extended and passionate celebration of the hijackers of 9/11,” he praises the 19 who carried out “the blessed strikes against global unbelief and its leader America.” He says of the hijackers, “It was not nineteen Arab states that did this deed. It was not Arab armies or ministries who humbled the oppressor who harms us in Palestine and elsewhere. It was nineteen post-secondary school students—I beg Allah almighty to accept them—who shook America’s throne, struck its economy right in the heart, and dealt the biggest military power a mighty blow, by the grace of Allah Almighty.” He continues by saying that the hijackers “are the people who have given up everything for the sake of ‘There is no Allah but Allah.’” He also criticizes Israel’s occupation of Palestine, and suggests that Israel is trying to expand its borders to Medina, currently in Saudi Arabia. Bin Laden also attacks the sanctions against Iraq, which he notes have resulted in “the murder of over a million children.” (Laden 2005, pp. 145-157) Bin Laden’s left arm appears to be injured in the video, fueling speculation he was wounded in the battle for Afghanistan (CNN 7/23/2002) No new videotapes of Bin Laden speaking are released for nearly three years after this (see October 29, 2004). (BBC 10/30/2004)

A new address by Osama bin Laden attacks the rulers of Saudi Arabia in even more strident terms than before. Professor Bruce Lawrence calls this speech “a blistering indictment of the House of Saud and the calamity it has historically represented for the [Arabian] peninsula.” Bin Laden says that the ruling Saudi family “has neglected the necessary conditions to maintain security, life, social harmony, and cohesion… Millions of people suffer every day from poverty and deprivation, while millions of riyals [the Saudi currency] flow into the bank accounts of the royals who wield executive power.” He also says the Al Saud family is “beyond the pale of Islam,” and defines the fight as “partly an internal regional struggle between global unbelief, with the apostates today under the leadership of America on one side, and the Islamic umma [community] and its brigades of mujaheddin, on the other.” He also complains of American influence over Saudi Arabia, and the depression in US interests of the price of oil, which apparently should be ”$100 [a barrel] at the very least.” In addition, he attacks other regional rulers, such as those in Jordan, Egypt, Yemen, Iraq, and Libya, and urges their violent overthrow. (Laden 2005, pp. 245-275)

Professor Bruce Lawrence. [Source: Duke University]Duke University professor Bruce Lawrence questions a tape reported to be from Osama bin Laden released on this day. In it, bin Laden comments on the progress of the wars in Afghanistan and Iraq and offers the US a truce (see January 19, 2006). The CIA says the voice on the tape is bin Laden’s, but Lawrence, who edited a collection of bin Laden’s speeches, is skeptical, saying that “[i]t was like a voice from the grave” and that the message is missing several key elements: “There’s nothing in this from the Koran. He’s, by his own standards, a faithful Muslim. He [usually] quotes scripture in defense of his actions. There’s no quotation from the Koran in the excerpts we got.” Lawrence also points out that, at 10 minutes, it is the shortest message ever issued by bin Laden. Lawrence questions when the tape was recorded, arguing that the timing of its release could be to divert attention from a recent strike in Pakistan during which civilians were killed (see January 13, 2006) and that bin Laden may actually be dead. (Rupinta 1/19/2006; BBC 1/20/2006)