This page can be viewed at http://www.historycommons.org/entity.jsp?entity=bruce_raynor_1

Bruce Raynor was a participant or observer in the following events:

September 4, 2010: Fox Business Host Accuses Union Advocate of ‘Siding’ with America’s ‘Enemies’ by Claiming the Right to Organize Is a Human Right 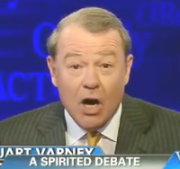 Fox Business Channel host Stuart Varney, appearing on Fox News’s ‘The O’Reilly Factor.’ [Source: Salt 'em All (.com)]A Fox Business Channel host attacks a union representative for “sid[ing] with [America’s] enemies” by advocating for the rights of workers to organize. The National Labor Relations Act of 1935, signed by President Franklin Roosevelt, was designed “to protect the rights of employees and employers, to encourage collective bargaining, and to curtail certain private sector labor and management practices.” For years, conservative and Republican candidates and organizations have fought against unions’ rights to bargain collectively, in part because labor unions are a critical element of the center-left “progressive” coalition in American politics. (Media Matters 9/7/2010; Board 2011) A regular segment on Fox News is titled “Unions: Can America Afford Them?” (Fox News 2011) Fox News host Glenn Beck often calls union workers “thugs” and/or “enforcers.” (Media Matters 9/7/2010) Stuart Varney, host of Varney and Company on the Fox Business Channel, attacks a union representative on his show for “sid[ing] with our enemies” against America. Varney opens by telling Bruce Raynor of the pro-union group Workers United: “I was shocked and angered by the idea that my government in America would link our behavior in America vis-a-vis unions, and link it to some kinds of human rights abuse. Say it ain’t so. You can’t be serious.” Varney is referring to a recent State Department report that calls for strengthening labor unions in order to combat workplace abuses by employers. Raynor begins by informing Varney that “millions of American workers today have no right to organize a union,” and Varney immediately attempts to cut him off by saying that all workers have “every right” to organize, a claim that is flatly untrue. Raynore cites examples of public workers in North Carolina, South Carolina, Georgia, and other states who are prohibited by law from forming unions; Varney then contends that the lack of a right to organize is not, as the State Department report claims, a human rights abuse. Raynor contends that it is indeed an abuse of human rights. Varney then accuses Raynor and the State Department of attempting to “embarrass this great country” by taking this report to the United Nations “and put us in the same league as North Korea.” Raynor calls the right to organize part of Americans’ constitutional right to free association. Varney then begins to shout Raynor down, saying: “That’s it? That’s all you’ve got?” Raynor attempts to counter with the fact that over 20 states have laws forbidding certain groups of workers from organizing in unions, and notes that drivers for Federal Express, one of the largest private employers in the US, are forbidden to join or organize unions, while drivers for United Parcel Express (UPS) do have that right. Varney calls Raynor’s examples “little” and “tiny” that mean nothing in a larger sense, and storms: “You now say that this great democracy abuses human rights. That’s embarrassing, sir.” Raynor continues to cite examples of workers who lack the right to organize, and Varney disputes the accuracy of Raynor’s facts, trying to dispute the fact of law with Raynor over workers’ rights to organize. Raynor says that every organization except for the military should have the right to organize, but many of them do not. The United States, Raynor says, “is the hardest country in the free world to organize unions.” Varney, clearly indignant, accuses Raynor of “report[ing] us to the United Nations, a den of thieves, and you say” the US is abusing its citizens’ rights. Varney begins shouting again, accusing Raynor of “embarrassing” the United States by “bringing a public spotlight,” and says: “You have sided with our enemies. You’re in the same camp as our enemies. That’s disgraceful.” Raynor attempts to deny the allegation, and Varney concludes the interview, saying, “I’m sorry, we must agree to differ, but that, sir, is disgraceful.” (Media Matters 9/4/2010; Media Matters 9/7/2010)