This page can be viewed at http://www.historycommons.org/entity.jsp?entity=carl_stokes_1

Carl Stokes was a participant or observer in the following events: 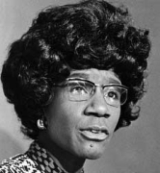 Shirley Chisholm. [Source: Ted Streshinsky / Corbis]President Nixon and his aides discuss several ways to split the Democrats in 1972. One is to secretly pump $5 million of Republican money into the prospective presidential campaign of antiwar candidate Eugene McCarthy. Another is to secretly finance an African-American presidential candidate. Some of the names bandied about are civil rights leader Jesse Jackson, Congresswoman Shirley Chisholm (D-NY), Cleveland mayor Carl Stokes, and Georgia state legislator Julian Bond. (Reeves 2001, pp. 370-371) Chisholm will run an unsuccessful campaign for president in 1972 (Jo Freeman 2/2005) , but it is not known whether her campaign receives any money from Republicans as Nixon suggests.