This page can be viewed at http://www.historycommons.org/entity.jsp?entity=carlyle_group

Carlyle Group was a participant or observer in the following events: 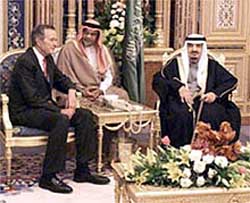 Ex-President Bush Sr. meeting with Saudi Arabia’s King Fahd on behalf of the Carlyle Group in 2000. [Source: Saudi Embassy]Former President George H. W. Bush meets with the bin Laden family on behalf of the Carlyle Group. He had also met with them in November 1998 (see November 1998), but it is not known if he meets with them again after this. Bush denies this meeting took place until a thank you note is found confirming that it took place. (Golden, Bandler, and Walker 9/27/2001; Burkeman and Borger 10/31/2001)

The Carlyle Group is a large private-equity investment firm, closely associated with officials of the Bush and Reagan administrations, and has considerable ties to Saudi oil money, including ties to the bin Laden family. This morning it is holding its annual investor conference at the Ritz Carlton hotel in Washington, DC. Among the guests of honor is investor Shafig bin Laden, brother of Osama bin Laden. (Vulliamy 6/16/2002; Briody 5/8/2003) Former President George H. W. Bush, who makes speeches on behalf of the Carlyle Group and is also senior adviser to its Asian Partners fund (Golden, Bandler, and Walker 9/27/2001) , attended the conference the previous day, but is not there today (see (8:00 a.m.) September 11, 2001). (Schneider 3/16/2003)

Carlyle Group logo. [Source: Carlyle Group]The Carlyle Group, based in Washington, DC, is one of the world’s largest private-equity investment firms. One of its brochures described it as investing “in niche opportunities created in industries heavily affected by changes in governmental policies.” (Warner 3/18/2002) It is also the 11th-largest defense contractor in the US. (Red Herring 12/11/2001) Since being established in 1987, it has signed up many former politicians and used their contacts and influence to promote itself. (Burkeman and Borger 10/31/2001) Those on its payroll include former Secretary of State James Baker, former White House budget director Dick Darman, former British Prime Minister John Major, and former US President George H. W. Bush. Its chairman is former CIA Director Frank Carlucci. (Warner 3/18/2002) Following 9/11, news reports revealed that Carlyle had a business relationship with Osama bin Laden’s family. According to a Carlyle executive, in 1995 the bin Ladens invested $2 million in the Carlyle Partners II fund, which includes various defense holdings. This was a fairly small amount considering the entire fund is worth $1.3 billion. However, a foreign financier with ties to the bin Ladens claimed their overall investment with Carlyle was much larger. (Golden, Bandler, and Walker 9/27/2001; Briody 5/8/2003) Shafig bin Laden, one of Osama’s brothers, had actually been in Washington, DC, on the morning of 9/11, attending the Carlyle Group’s annual investor conference there (see (9:00 a.m.) September 11, 2001). Former President George H. W. Bush, who is senior adviser to Carlyle Group’s Asian Partners fund, has twice met with the bin Laden family on behalf of the company (see November 1998; January 2000). On this day though, the Carlyle Group ends its relationship with the bin Ladens, and gives them back their investment. (Red Herring 12/11/2001; Warner 3/18/2002) But the family is very well-connected, and their investment in Carlyle is hardly unusual for them. The New Yorker will note, “Much of the family’s private banking is handled by Citigroup, which is chaired by former Treasury Secretary Robert Rubin. The family has equity investments with Merrill Lynch and Goldman, Sachs. Among the family’s business partners is General Electric. A spokesman for Jack Welch, the chairman of G.E., says that the family threw a party for him in the nineteen-nineties in Saudi Arabia, and that Welch ‘considers them good business partners.’ One American diplomat says, ‘You talk about your global investors, it’s them. They own part of Microsoft, Boeing, and who knows what else.’” (Mayer and Szechenyi 11/5/2001) 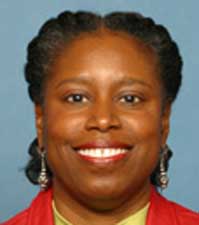 Cynthia McKinney. [Source: House of Representatives]US Representative Cynthia McKinney (D-GA) calls for a thorough investigation into whether President Bush and other government officials may have been warned of the 9/11 attacks but did nothing to prevent them. She is the first national-level politician to do so. She states: “News reports from Der Spiegel to the London Observer, from the Los Angeles Times to MSNBC to CNN, indicate that many different warnings were received by the administration.… I am not aware of any evidence showing that President Bush or members of his administration have personally profited from the attacks of 9/11.… On the other hand, what is undeniable is that corporations close to the administration have directly benefited from the increased defense spending arising from the aftermath of September 11. The Carlyle Group, Dyn-Corp, and Halliburton certainly stand out as companies close to this administration.” (McKinney 4/12/2002) McKinney’s comments are criticized and ridiculed by other politicians and the media. For instance, Representative Mark Foley (R-FL) states, “She has said some outrageous things but this has gone too far.… Maybe there should be an investigation as she suggests—but one focused on her.” Senator Zell Miller (D-GA) says her comments were dangerous and irresponsible. (Eilperin 4/12/2002) An editorial in her home state calls her the “most prominent nut” promoting 9/11 “conspiracy theories.” (Atlanta Journal-Constitution 4/15/2002) One columnist says she is possibly “a delusional paranoiac” or “a socialist rabble-rouser who despises her own country.” (Parker 4/21/2002) White House Press Secretary Ari Fleischer says McKinney “must be running for the hall of fame of the Grassy Knoll Society.” (Eilperin 4/12/2002) One month after McKinney’s comments, the Bush administration comes under fire after reports reveal it had been warned five weeks before 9/11 about possible al-Qaeda plane hijackings, and McKinney claims vindication. She will lose reelection later in the year, but win her seat back in 2004. (Office of Congresswoman Cynthia McKinney 5/16/2002)