This page can be viewed at http://www.historycommons.org/entity.jsp?entity=castle_rock_foundation_1

Castle Rock Foundation was a participant or observer in the following events: 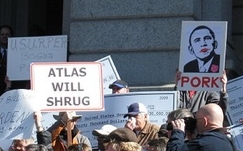 Protesters in front of the Colorado State Capitol wave anti-Obama, pro-Ayn Rand signs and large ‘checks’ from the federal government representing ‘pork’ spending. [Source: People's Press Collective / Michelle Malkin]Hundreds of protesters gather on the steps of the Colorado State Capitol to protest President Obama’s signing of the economic stimulus legislative package (see February 16, 2009). The rally is organized by, among others, the Colorado chapter of Americans for Prosperity (see Late 2004, February 16-17, 2009, February 19, 2009 and After, and April 2009 and After), the Independence Institute, and blogger Michelle Malkin. Former House Representative Tom Tancredo (R-CO) is one of the speakers, along with a number of state and local Republican politicians. Malkin writes after the rally: “[H]opefully, [the rally] will spur others to move from the phones and computers to the streets. Community organizing helped propel Barack Obama to the White House. It could work for fiscal conservatism, too.” Liberal blogger Jane Hamsher later notes that the Independence Institute is funded by the Coors Foundation’s Castle Rock Foundation, which operates as something of a “mini Heritage Foundation in Colorado.” Beer billionaire and conservative financier Jeffrey Coors sits on the board of the Institute. Hamsher later writes, “According to Michelle Malkin, second rally organized by Koch/Americans for Prosperity, Coors/Independence Institute, former GOP congressman and Independence Institute fellow Tom Tancredo.” (Michelle Malkin 2/17/2009; Hamsher 4/15/2009)