This page can be viewed at http://www.historycommons.org/entity.jsp?entity=cecil_king_1

Cecil King was a participant or observer in the following events:

1962: Reagan Warns that Medicare Will Lead to Socialism, Destruction of American Democracy 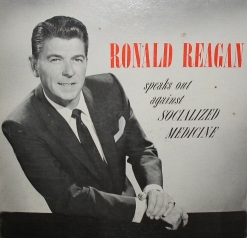 The cover to the AMA album featuring Ronald Reagan. [Source: Larry DeWitt]The American Medical Association (AMA) releases an 11-minute spoken-word album (LP) featuring actor and promising conservative politician Ronald Reagan. Reagan speaks against what he and the AMA call the “socialized medicine” of Medicare, currently being considered in Congress as part of legislation proposed by Democrats Cecil King and Clinton Anderson; many refer to the legislation as the King-Anderson bill. The AMA, along with most Congressional Republicans and a good number of Democrats, has been fighting the idea of government-provided health care since 1945 (see 1962).
Socialism Advancing under Cover of Liberal Policies - Reagan begins by warning that as far back as 1927, American socialists determined to advance their cause “under the name of liberalism.” King-Anderson is a major component of the secret socialist agenda, Reagan says. “One of the traditional methods of imposing statism or socialism on a people has been by way of medicine,” he says. “It’s very easy to disguise a medical program as a humanitarian project.” No real American wants socialized medicine, Reagan says, but Congress is attempting to fool the nation into adopting just such a program. It has already succeeded in imposing a socialist program on the country by creating and implementing Social Security, which was originally envisioned to bring “all people of Social Security age… under a program of compulsory health insurance.” Reagan, following the AMA’s position, says that the current “Eldercare” program, often called “Kerr-Mills” for its Congressional sponsors, is more than enough to cover elderly Americans’ medical needs. (Author Larry DeWitt notes that in 1965, Kerr-Mills will be superseded by Medicaid, the medical program for the poor. He will write, “So Reagan—on behalf of the AMA—was suggesting that the nation should be content with welfare benefits under a Medicaid-type program as the only form of government-provided health care coverage.”) King-Anderson is nothing more than “simply an excuse to bring about what [Democrats and liberals] wanted all the time: socialized medicine,” Reagan says. And once the Medicare proposal of King-Anderson is in place, he argues, the government will begin constructing an entire raft of socialist programs, and that, he says, will lead to the destruction of American democracy. “The doctor begins to lose freedom,” he warns. “First you decide that the doctor can have so many patients. They are equally divided among the various doctors by the government. But then doctors aren’t equally divided geographically. So a doctor decides he wants to practice in one town and the government has to say to him, you can’t live in that town. They already have enough doctors. You have to go someplace else. And from here it’s only a short step to dictating where he will go.… All of us can see what happens once you establish the precedent that the government can determine a man’s working place and his working methods, determine his employment. From here it’s a short step to all the rest of socialism, to determining his pay. And pretty soon your son won’t decide, when he’s in school, where he will go or what he will do for a living. He will wait for the government to tell him where he will go to work and what he will do.” DeWitt will note that this is far more extravagant than any of the Medicare proposals ever advanced by any lawmaker: “It was this more apocalyptic version of Medicare’s potential effects on the practice of medicine that Reagan used to scare his listeners.”
Advocating Letter-Writing Campaign - Reagan tells his listeners that they can head off the incipient socialization of America by engaging in a nationwide letter-writing campaign to flood Congress with their letters opposing King-Anderson. “You and I can do this,” he says. “The only way we can do it is by writing to our congressman even if we believe he’s on our side to begin with. Write to strengthen his hand. Give him the ability to stand before his colleagues in Congress and say, ‘I heard from my constituents and this is what they want.’”
Apocalypse - If the effort fails, if Medicare passes into law, the consequences will be dire beyond imagining, Reagan tells his audience: “And if you don’t do this and if I don’t do it, one of these days you and I are going to spend our sunset years telling our children, and our children’s children, what it once was like in America when men were free.” Reagan is followed up by an unidentified male announcer who reiterates Reagan’s points and gives “a little background on the subject of socialized medicine… that now threatens the free practice of medicine.” Reagan then makes a brief closing statement, promising that if his listeners do not write those letters, “this program I promise you will pass just as surely as the sun will come up tomorrow. And behind it will come other federal programs that will invade every area of freedom as we have known it in this country, until, one day… we will awake to find that we have socialism. And if you don’t do this, and if I don’t do it, one of these days, you and I are going to spend our sunset years telling our children, and our children’s children, what it once was like in America when men were free.” (Larry DeWitt 9/2004; Beutler 8/25/2009)

American Medical Association logo. [Source: American Medical Association]The American Medical Association (AMA), in conjunction with many Congressional Republicans and some Democrats, attempts to beat back attempts to create a new government-run program to provide medical care for the elderly, to be called “Medicare.” The AMA and its political allies have fought the idea of a government-provided health care program for senior citizens since 1945, when then-President Harry Truman first suggested universal health care for all Americans.
Minimal 'Eldercare' Considered Too Much - Currently, a modest health care program for senior citizens, called “Eldercare,” is the only government coverage American seniors have. It is based on a compromise proposal written by conservative Democratic Senator Robert Kerr (D-OK) and Representative Wilbur Mills (D-AR) and signed into law by President Dwight Eisenhower. Eldercare provides government benefits only for senior citizens who can demonstrate economic need, and states that choose not to participate in the program can opt out entirely. However, the AMA considers even this truncated program far too invasive, and fiercely opposes the more sweeping “Medicare” proposal, called King-Anderson after its main authors, Senator Clinton Anderson (D-NM) and Representative Cecil King (D-CA). The legislation is mired in Congressional committees. (Time 2/19/1965; Larry DeWitt 9/2004)
WHAM - The opposition to King-Anderson is led by the Women’s Auxilary of the AMA, which is given the task of coordinating the WHAM program—Women Help American Medicine. WHAM is directly dedicated to defeating the King-Anderson bill in Congress, “a bill which would provide a system of socialized medicine for our senior citizens and seriously curtail the quality of medical care in the United States.” The public campaign consists of the usual rallies and advertisements, most funded by corporate lobbyists working for the AMA and other health care firms. WHAM accuses King-Anderson proponents of being “socialists” and warns of federal bureaucrats violently invading “the privacy of the examination room.” WHAM coordinates an extensive grassroots effort under the rubric of “Operation Hometown,” enlisting local medical societies to speak out against King-Anderson, and providing pamphlets, reprints of press releases and articles, and talking points to local physicians.
Operation Coffeecup - Operation Coffeecup is a less visible, but just as important, element of the WHAM campaign. It centers around a series of “coffee klatches,” or “impromptu” get-togethers in kitchens and living rooms across America, hosted by WHAM members. WHAM members are told to downplay the significance of the events. One instruction tells them to portray the events as nothing more than “spontaneous” neighborhood get-togethers: “Drop a note—just say ‘Come for coffee at 10 a.m. on Wednesday. I want to play the Ronald Reagan record for you.’” The attendees are shown how to write equally “spontaneous” letters to members of Congress opposing the King-Anderson bill. The letters are carefully constructed to give the appearance of real, unsolicited missives written by concerned Americans, not the product of an orchestrated lobbying effort. Each WHAM member uses a 10-point checklist to ensure that the letters cover the points needed to make the argument against King-Anderson, and are not full of boilerplate, obviously copied-over material. The program is deliberately kept quiet, for fear that the media will portray it as an attempt to manipulate public opinion.
Reagan on Vinyl - The centerpiece of the Operation Coffeecup material is a vinyl LP entitled Ronald Reagan Speaks Out Against Socialized Medicine (see 1962). The album is a 19-minute recording featuring an 11-minute address by Reagan, followed by an eight-minute follow-up by an announcer. WHAM members are assured that Reagan’s work for the organization is unpaid and voluntary, though they are not told that his father is a top AMA executive. Instead, they are told Reagan is motivated entirely by his sincere political convictions. The hope is that Reagan’s message will inspire legions of housewives to write letters demanding that King-Anderson be defeated. The AMA claims that Operation Coffeecup prompts a “legion” of responses. (Larry DeWitt 9/2004)
Exposed - In June 1962, investigative reporter Drew Pearson exposes Operation Coffeecup in his newspaper column. Pearson writes: “Ronald Reagan of Hollywood has pitted his mellifluous voice against President Kennedy in the battle for medical aid for the elderly. As a result it looks as if the old folks would lose out. He has caused such a deluge of mail to swamp Congress that congressmen want to postpone action on the medical bill until 1962. What they don’t know, of course, is that Ron Reagan is behind the mail; also that the American Medical Association is paying for it.… Reagan is the handsome TV star for General Electric.… Just how this background qualifies him as an expert on medical care for the elderly remains a mystery. Nevertheless, thanks to a deal with the AMA, and the acquiescence of General Electric, Ronald may be able to outinfluence the president of the United States with Congress.” (Larry DeWitt 9/2004; Beutler 8/25/2009)