This page can be viewed at http://www.historycommons.org/entity.jsp?entity=charles_holland_1

Charles Holland was a participant or observer in the following events:

Special Assistant to the Secretary and Deputy Secretary of Defense Stephen Cambone will later state, “[T]he purpose of Able Danger was to develop a campaign plan. By November of 2000, the Garland effort was terminated—that is, the activity with Raytheon—and resources were shifted to the development of the actual draft of the campaign plan. That is, for a period of about five months or so, continuous effort was made to develop the tools. But by the time we come to the end of 2000, we need the plan. And so, SOCOM decides that it’s going to put its resources against developing the plan, terminate the activity at Garland, Texas, and begins to draft the plan. That plan, in the end, was rolled into a larger activity within the Joint Staff in the early 2001 timeframe, and that larger plan has within it components that are very much connected to the heritage of the Able Danger activity.… As best we can ascertain, US SOCOM had Raytheon, at the end of its effort in November of 2000, take most of the data that had been generated at Raytheon, and take it out of its system, essentially to purge it. A small percentage of information, roughly about one percent of that developed at Garland, was in turn transferred over to US Special Operations Command.” Cambone says the reason for this second massive data purge was, “[W]here we are by the end of the year 2000 is that, information that had been generated at LIWA [Land Information Warfare Activity] runs up against the concern about US persons information being stored improperly, as well as having the authority to do the operation for the Army.” (US Congress 2/15/2006) Lt. Col. Anthony Shaffer will later blame the retirement of Gen. Pete Schoomaker in October 2000 and his replacement by Gen. Charles Holland as a major reason for the shut down of the data mining effort. He says, “Gen. Holland, in my judgment, did not understand the concept, and order[ed] the effort to terminate its activities in Garland, Texas, and for the personnel to return to Tampa [Florida, the location of SOCOM headquarters].” Over the next few months, Holland will direct Able Danger to change into the Special Operations Joint Integration Center (SOJIC). According to Shaffer, “the teeth and operational focus [are] removed and the capability to do the complex data mining and mission planning support (leadership support) is eliminated,” effectively ending Able Danger. (US Congress 2/15/2006

Dell Dailey. [Source: US Department of State]Members of the Joint Special Operations Command (JSOC)—the nation’s “top counterterrorism unit”—are away from America when it comes under terrorist attack, participating in a training exercise in Hungary. (Naylor 2015, pp. ix-x; Stein 9/11/2015) The highly classified exercise, called Jackal Cave, is one of several joint readiness exercises that JSOC conducts each year. It is part of a larger exercise, called Ellipse Bravo, run by the US military’s European Command (see (After 9:03 a.m.) September 11, 2001). (Arkin 2005, pp. 358-359; Naylor 2015, pp. ix) Jackal Cave involves participants tracking down a hypothetical hybrid force made up of terrorists and elements of international organized crime who are trafficking in weapons of mass destruction. “We were tracking ‘terrorists,’” a JSOC staff officer will later comment. “[A]nd then [we’d] bring an assault element in to take the target down.” Details of the mock terrorists in the exercise are unclear, but they are not Islamists, according to journalist and author Sean Naylor. (Naylor 2015, pp. x, 441)
JSOC and Delta Force Are Participating in the Exercise - Jackal Cave involves over 500 personnel, 62 aircraft, and 420 tons of cargo. (Arkin 2005, pp. 404) Hundreds of JSOC personnel are taking part. (Naylor 2015, pp. 85) JSOC, based at Fort Bragg and Pope Air Force Base in North Carolina, is responsible for conducting the US military’s most sensitive counterterrorism missions. (Risen and Schmitt 9/3/2002; GlobalSecurity (.org) 6/24/2013) Its headquarters for the exercise is divided between Taszár Air Base, about 120 miles southwest of Budapest, Hungary, and Tuzla, Bosnia. A squadron from the US Army’s Delta Force is also participating in the exercise. (Fury 2008, pp. 56; Post 9/10/2011; Naylor 2015, pp. x) Delta Force is designed to be an overseas counterterrorist unit and specializes in hostage rescue, barricade operations, and reconnaissance. (GlobalSecurity (.org) 6/24/2013) Its personnel are trained in dealing with terrorist situations in buildings and hijacked aircraft, among other things. (Trinidad 12/1/2001; Haney 2002, pp. 213; Schading and Schading 2006, pp. 156)
Mock Terrorists Are Played by US Military Personnel - Others taking part in Jackal Cave include members of the US Army’s 10th Special Forces Group, members of the Department of Energy’s Nuclear Emergency Search Team (see (September 10-15, 2001)), and some Hungarian military elements. (Richelson 2009, pp. 178; Jeffrey T. Richelson 1/23/2009; Naylor 2015, pp. x) The terrorists in the exercise are being played by operatives from the Defense HUMINT Service—the US Defense Department’s clandestine spy network. Members of the US Navy’s SEAL Team Six are also taking part and are in the port of Dubrovnik, Croatia, from where the hypothetical enemy is trying to ship nuclear material out on a boat. The SEALs are going to be flown by helicopter to assault the boat in the Mediterranean Ocean.
JSOC Commander Learns of the Attacks in the US and Cancels the Exercise - At the time the attacks on the World Trade Center take place, Jackal Cave has barely started. One or two Delta Force staffers and some operatives with the Operational Support Troop—Delta Force’s in-house intelligence arm—are out tracking the mock terrorists through downtown Budapest. Meanwhile, Major General Dell Dailey, head of JSOC, is at the US embassy in Budapest, where he has been briefing senior officials on the exercise. He learns about the attacks on the WTC after leaving the briefing with his senior enlisted adviser, Army Command Sergeant Major Mike Hall. Major Jim Reese, a Delta Force officer, sees the coverage of the burning Twin Towers on television and then runs after the two men. He tells Dailey, “Hey sir, you need to see this.” Dailey quickly walks to his operations center at the embassy and sees the coverage of the attacks on TV. He then answers a phone call from his boss, Air Force General Charles Holland, head of US Special Operations Command at MacDill Air Force Base in Tampa, Florida. Holland tells him to abandon the exercise and return to the US as quickly as possible. After hanging up, Dailey turns to Reese and Lieutenant Colonel Scott Miller, another Delta Force officer, and says he is canceling the exercise immediately and returning to the US, and they should get back to the US too. However, as America’s airspace is closed to international commercial flights for several days following today’s attacks, it will take almost a week for the JSOC personnel who are in Europe for the exercise to return to America. (Naylor 2015, pp. ix-xiii, 85) 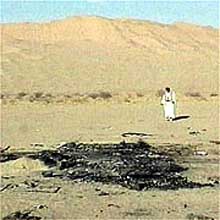 Wreckage left behind where a missile struck Qaed Salim Sinan al-Harethi’s truck in Yemen. [Source: Associated Press]Defense Secretary Donald Rumsfeld issue a secret directive ordering commander of Special Operations Air Force General Charles Holland “to develop a plan to find and deal with members of terrorist organizations” anywhere in the world (see July 22, 2002). The directive says, “The objective is to capture terrorists for interrogation or, if necessary, to kill them, not simply to arrest them in a law-enforcement exercise.” Holland is to cut through the Pentagon bureaucracy and process deployment orders “in minutes and hours, not days and weeks.” In internal Defense Department memos, Rumsfeld and the civilian officials close to him lay out the case for a new approach to the war on terrorism, one that would partly rely on the killing of individuals outside war zones. (Hersh 12/16/2002) The first public manifestation of this new policy will be the November 2002 assassination of al-Qaeda leader Qaed Salim Sinan al-Harethi in Yemen with a Predator missile strike (see November 3, 2002).