This page can be viewed at http://www.historycommons.org/entity.jsp?entity=charles_lewis_1

Charles Lewis was a participant or observer in the following events:

The Senate launches an investigation into what a minority (Democratic) report calls “an audacious plan to pour millions of dollars in contributions into Republican campaigns nationwide without disclosing the amount or source” in order to evade campaign finance laws. A shell corporation, Triad Management, is found to have paid more than $3 million for attack ads in 26 House races and three Senate races. More than half of the advertising money came from an obscure nonprofit group, the Economic Education Trust. The Senate minority report finds that “the trust was financed in whole or in part by Charles and David Koch of Wichita, Kansas” (see August 30, 2010). Many in the investigation believe that the Koch brothers paid for the attack ads, most of which aired in states where Koch Industries does business. The brothers refuse to confirm or deny their involvement to reporters. In 1998, the Wall Street Journal will confirm that a consultant on the Kochs’ payroll had been involved in the scheme. Charles Lewis of the Center for Public Integrity will describe the scandal as “historic,” explaining: “Triad was the first time a major corporation used a cutout (a front operation) in a threatening way. Koch Industries was the poster child of a company run amok.” (Mayer 8/30/2010)

Center for Public Integrity logo. [Source: Center for Public Integrity]The Center for Public Integrity (CPI), a non-profit, non-partisan investigative journalism organization, releases an analysis of top Bush administration officials’ statements over the two years leading up to the March 18, 2003 invasion of Iraq.
Significance - Analysts and authors Charles Lewis and Mark Reading-Smith state that the analysis proves that the Bush administration engaged in deliberate deception to lead the country into war with Iraq, and disproves the administration’s contention that its officials were the victims of bad intelligence. CPI states that the analysis shows “the statements were part of an orchestrated campaign that effectively galvanized public opinion and, in the process, led the nation to war under decidedly false pretenses.” According to CPI’s findings, eight top administration officials made 935 false statements concerning either Iraq’s possession of weapons of mass destruction or Iraq’s links to al-Qaeda, between September 11, 2001 and the invasion itself. These statements were made on 532 separate occasions, by the following administration officials: President George W. Bush, Vice President Dick Cheney, Secretary of State Colin Powell, then-National Security Adviser Condoleezza Rice, then-Defense Secretary Donald Rumsfeld, then-Deputy Defense Secretary Paul Wolfowitz, and former White House press secretaries Ari Fleischer and Scott McClellan.
Foundation of Case for War - These deliberate falsehoods “were the underpinnings of the administration’s case for war,” says CPI executive director Bill Buzenberg. Lewis says, “Bush and the top officials of his administration have so far largely avoided the harsh, sustained glare of formal scrutiny about their personal responsibility for the litany of repeated, false statements in the run-up to the war in Iraq.” According to the analysis, Bush officials “methodically propagated erroneous information over the two years beginning on September 11, 2001.” The falsehoods dramatically escalated in August 2002, just before Congress passed a war resolution (see October 10, 2002). The falsehoods escalated again in the weeks before Bush’s State of the Union address (see 9:01 pm January 28, 2003) and Powell’s critical presentation to the United Nations (see February 5, 2003). All 935 falsehoods are available in a searchable database on the CPI Web site, and are sourced from what the organization calls “primary and secondary public sources, major news organizations and more than 25 government reports, books, articles, speeches, and interviews.” CPI finds that “officials with the most opportunities to make speeches, grant media interviews, and otherwise frame the public debate also made the most false statements.”
Breakdown - The tally of falsehoods is as follows:

Rumsfeld and Fleischer: 109 each.

McClellan: 14.
The analysis only examines the statements of these eight officials, but, as CPI notes, “Other administration higher-ups, joined by Pentagon officials and Republican leaders in Congress, also routinely sounded false war alarms in the Washington echo chamber.”
An 'Impenetrable Din' - Lewis and Reading-Smith write that the “cumulative effect of these false statements,” amplified and echoed by intensive media coverage that by and large did not question the administration’s assertions, “was massive, with the media coverage creating an almost impenetrable din for several critical months in the run-up to war.” CPI asserts that most mainstream media outlets were so enthusiastically complicit in the push for war that they “provided additional, ‘independent’ validation of the Bush administration’s false statements about Iraq.” Lewis and Reading-Smith conclude: “Above all, the 935 false statements painstakingly presented here finally help to answer two all-too-familiar questions as they apply to Bush and his top advisers: What did they know, and when did they know it?” (Center for Public Integrity 1/23/2008; Center for Public Integrity 1/23/2008) The Washington Post’s Dan Froomkin approvingly calls the study “old-fashioned accountability journalism.” (Froomkin 1/23/2008)

White House press secretary Dana Perino dismisses a study by the Center for Public Integrity (CPI) that found 935 false statements made by President Bush and seven of his top officials before the invasion of Iraq that helped mislead the country into believing Iraq was an imminent threat (see January 23, 2008). Perino responds: “I hardly think that the study is worth spending any time on. It is so flawed in terms of taking anything into context or including—they only looked at members of the administration, rather than looking at members of Congress or people around the world, because, as you’ll remember, we were part of a broad coalition of countries that deposed a dictator based on a collective understanding of the intelligence.”
CPI Response - CPI’s Charles Lewis, a co-author of the study, retorts that Perino has little credibility because “this is the press secretary who didn’t know about the Cuban Missile Crisis until a few months ago.… [S]he made a reference that she had—actually didn’t know about the Cuban Missile Crisis back in the ‘60s. For a White House press secretary to say that is astonishing to me.” Lewis calls Perino’s comment “predictable,” and cracks, “At least she didn’t call this a third-rate burglary” (see 2:30 a.m.June 17, 1972). “If my administration, that I’m the flack for, made 935 false statements, I would want to say, ‘Go do another study and take ten years and look at the world and Congress.’ The fact is, the world was rallied, as was the compliant Congress, into doing exactly what the administration wanted. And the bottom line is, she didn’t say that they were not false statements. Basically, they acknowledged they were false statements without her saying it. They have essentially said, ‘Gosh, I guess there weren’t any WMDs in Iraq,’ in other statements they’ve made, ‘it’s all bad intelligence.’”
Defense of Analysis - Far from being a flawed and superficial analysis, Lewis says, the analysis supplies “400,000 words of context, weaving in all of this material, not just what they said at the time, but what has transpired and what has tumbled out factually in the subsequent six years. So we actually have as much context so far as anyone has provided in one place. It’s searchable for all citizens in the world and for Congress and others that want to deal with this from here on.” (Goodman 1/24/2008)

Reporter Amy Goodman interviews Charles Lewis of the Center for Public Integrity (CPI), the co-author of a study that documents 935 false statements made by President Bush and seven of his top advisers in the two years before the Iraq invasion (see January 23, 2008). Lewis says that, after the raft of government reports that admitted Iraq had no weapons of mass destruction and no links to al-Qaeda, he and his fellow researchers became interested in who stated those falsehoods, how they did so, and how often: “In other words, how did we get from this not being true to it being a war and what happened there?” Goodman asks if “what [the administration officials] knew behind the scenes and what they were saying publicly” is so different, then “aren’t you talking about lies?” Lewis is more diplomatic, replying that Bush and his seven officials chose “certain information over other information.” What interested him and his fellow researchers was “the process inside the White House… how this campaign was orchestrated.” The White House has apparently destroyed much of the documentary and electronic trail surrounding the run-up to war, he notes, and Congress has not held any hearings on the decision to invade Iraq. Perhaps, Lewis says, this analysis will be the beginning of a better understanding of that process and even the precursor to a real investigation. Lewis says that without interviewing the people involved, he must hesitate to call the 935 statements outright lies. Reporter Bob Drogin, author of the book Curveball that examines one of the linchpin sets of falsehoods that drove the US into war, says he is not sure what to think about the discussion over whether or not the 935 falsehoods are actually lies. “I mean, it’s sort of like asking, to me, whether they, you know, forgot to put their turn signal on before they drove off a bridge. I mean, they took us into the midst of a—you know, a terrible, a horrific, tragic war, and they did it on the basis of ponied-up false intelligence. And sort of where they pushed the evidence here or there is sort of—to me, is sort of secondary. The fact is, they got it absolutely wrong on every single quarter.” (Goodman 1/24/2008) 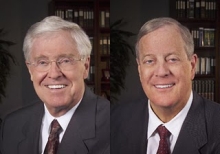