This page can be viewed at http://www.historycommons.org/entity.jsp?entity=charles_swannack__jr_1

Charles Swannack, Jr was a participant or observer in the following events: 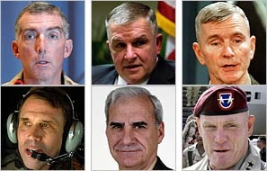 Six of the generals named by the New York Times as part of the ‘Generals’ Revolt: clockwise from the upper left, Paul Eaton, Anthony Zinni, Gregory Newbold, Charles Swannack, John Riggs, and John Batiste. [Source: New York Times]Three eminent retired generals call for the resignation of Defense Secretary Donald Rumsfeld, citing his failure of leadership with the Iraq occupation. These three, with several other retired flag officers, will soon be labeled as part of the so-called “Generals’ Revolt” by the media. (Roberts 2008, pp. 157-158)
Rumsfeld Accused of 'Arrogance,' 'Mismanagement' - On NPR, General John Riggs says of Rumsfeld, “I think he should step aside and let someone step in who can be more realistic.” Rumsfeld and his staff “only need military advice when it satisfies their agenda.… That’s why I think he should resign.” Riggs says that he supported the invasion of Iraq, but accuses Rumsfeld and his staff of “arrogance” and “micro/mismanagement.” (National Public Radio 4/13/2006)
Need for 'Teamwork,' Mutual Respect - Major General John Batiste, who commanded the 1st Infantry Division in Iraq until his retirement in 2005, tells CNN, “I think we need a fresh start” at the top of the Pentagon. “We need leadership up there that respects the military as they expect the military to respect them. And that leadership needs to understand teamwork.” (Ricks 4/13/2006)
'Too Much Baggage' - Retired Major General Charles Swannack, Jr, the former commander of the 82nd Airborne, tells CNN, “I really believe that we need a new secretary of defense because Secretary Rumsfeld carries way too much baggage with him.” Swannack continues: “Specifically, I feel he has micromanaged the generals who are leading our forces there.… And I believe he has culpability associated with the Abu Ghraib prison scandal and, so, rather than admitting these mistakes, he continually justifies them to the press… and that really disallows him from moving our strategy forward.” (CNN 4/14/2006) Swannack tells a New York Times reporter: “We need to continue to fight the global war on terror and keep it off our shores. But I do not believe Secretary Rumsfeld is the right person to fight that war based on his absolute failures in managing the war against Saddam in Iraq.” (Cloud and Schmitt 4/14/2006)
'Floodgates' of Criticism Beginning to Open, Say Other Generals - Other retired generals, such as Marine Lieutenant General Wallace Gregson, expect the backlash against Rumsfeld to continue. He says that many current and retired flag officers “are hugely frustrated,” in part because Rumsfeld gave the impression that “military advice was neither required nor desired” in the planning for the Iraq war. Gregson, who refuses to express his own feelings about Rumsfeld’s leadership, says he senses much anger among Americans over the administration’s handling of the war, and believes the continuing criticism from military professionals will fuel that anger as the November elections approach. (Ricks 4/13/2006) “Are the floodgates opening?” another retired Army general asks, drawing a connection between the complaints and the fact that Bush’s second term ends in less than three years. “The tide is changing, and folks are seeing the end of this administration.” (Cloud and Schmitt 4/14/2006)