This page can be viewed at http://www.historycommons.org/entity.jsp?entity=christopher_brown

Christopher Brown was a participant or observer in the following events:

Christopher Brown of the Hudson Institute writes that the Shanghai Cooperation Organization (SCO) is “perhaps the most dangerous organization that the American people have never heard of.” Brown asserts that the SCO’s publicly stated goals, including fighting terrorism, are a sham. He writes that the SCO is the most obvious but most ignored challenge to the US and warns that the potential future inclusion of Iran into the organization could lead to weapons proliferation. He reasons that “since one of the programs of the SCO is the linking of the road systems in the region,” the transportation of dangerous goods between Iran and China would increase dramatically. (Brown 5/30/2005) 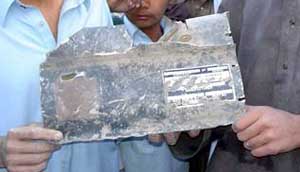 Pakistanis hold up a piece of the missile that allegedly killed Abu Hamza Rabia. [Source: Marib Press / Associated Press]The US kills al-Qaeda leader Abu Hamza Rabia with a missile fired from a Predator drone. Rabia is killed with four others in North Waziristan, part of Pakistan’s tribal region. Apparently, a Predator missile strike in the same region missed Radia on November 5, 2005, but killed eight others. Anonymous US officials say Rabia, an Egyptian, was head of al-Qaeda’s foreign operations. It is speculated that he recently replaced Abu Faraj al-Libbi as al-Qaeda’s number three leader after Faraj was captured in May 2005 (see May 2, 2005). (Whitlock and Khan 12/4/2005; Fox News 12/5/2005) However, very little had been reported on Rabia’s supposed importance prior to his death, although an FBI official said in 2004, “If there is an attack on the US… Hamza Rabia will be responsible. He’s head of external operations for al-Qaeda—an arrogant, nasty guy.” (Wright 7/26/2004) But there was no reward for him, there are no known public photos of him, and he had not been on any most wanted lists. Some experts dispute Rabia’s importance. For instance, counterterrorism expert Christopher Brown says Rabia was probably a local senior member of al-Qaeda, but was far from being its number three leader. He points out that Saif al-Adel is clearly more important, and probably just behind Osama bin Laden and Ayman al-Zawahiri. The global intelligence firm Stratfor contends that neither Rabia nor his supposed number three predecessor Faraj were very high ranking. Counterterrorism expert Evan Kohlmann says that the whole practice of assigning numeric rankings “doesn’t make any sense.” He adds, “This isn’t a Fortune 500 company with clearly defined roles,” and says assigning numbers is just “a way to sell a story to media.” (Gossett 12/16/2005)