This page can be viewed at http://www.historycommons.org/entity.jsp?entity=christopher_d__braman_1

Christopher D. Braman was a participant or observer in the following events: 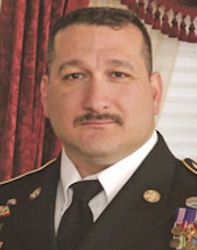 Chris Braman. [Source: California State University, Fullerton]A number of witnesses hear secondary explosions inside the Pentagon in the immediate aftermath of the attack there. (Fournier 9/11/2001; Vobedja 9/11/2001) Some possible explanations are later suggested for these explosions, though their exact causes are unclear.

Captain William Toti, the special assistant to the vice chief of naval operations, hears and feels numerous explosions while he assists in the rescue efforts at the crash site. (Toti 9/2002; Washington Post 11/17/2006; Gallagher 9/12/2008) A month later, Toti will recall, “One of the things I haven’t seen reported in any of the papers was that periodically, for about the next hour [after he arrives at the crash site], there were secondary explosions going off in the hole in the Pentagon.” While he is standing about 30 yards from the point of impact, Toti hears “pop… pop, pop… pop, pop, pop… pop.” He will say these explosions are “loud. Scary, absolutely scary. The make-you-jump kind of explosions.” (Toti 10/10/2001) Toti and two Army officers that assist him with the rescue efforts fear the explosions, which come from “the fissure” in the building, “are bombs.” (Washington Post 11/17/2006) But, Toti will recall, about an hour after he arrives at the crash site, he is “standing with some FBI guys and we were musing as to what the source of the explosions was, and we concluded that they were the oxygen canisters from the airplane. You know, the things [that] produce oxygen for the passengers in an emergency.” Toti will say this possible explanation is the “best thing we could think of.” (Toti 10/10/2001)

Army Lieutenant Colonel Ted Anderson and Army Staff Sergeant Chris Braman go into the Pentagon near the crash site to rescue injured victims. They are reportedly “stunned by secondary explosions.” One of these is a “fire department car exploding,” according to Anderson. The causes of the other explosions are unclear. (Newsweek 9/28/2001; Washington Post 9/8/2002)

Lieutenant Commander David Tarantino, a Navy flight surgeon, and Navy Captain David Thomas go into the Pentagon to search for survivors. (Goldberg et al. 2007, pp. 54-55) They feel “secondary explosions and wondered whether the whole building would cave in or if they were under more attacks,” according to The Washingtonian. (Philpott 12/2001) Tarantino will later recall that there are “secondary explosions going on.” (Tarantino 9/25/2001)

Colonel Jonathan Fruendt, an Army physician, is heading toward the Pentagon’s center courtyard shortly after the crash when he hears an explosion. “I heard another loud boom,” he will later recall. As soon as the explosion occurs, people in the corridor with Fruendt “instantly froze in position, and then they turned around and started running back, away from the exit.” Fruendt will later comment: “No one has really explained to me exactly what that noise was. Some people said, later, maybe it was some fuel or one of these vehicles, something around the original crash site that blew up.… Other people said it was a sonic boom from the fighters that were flying over the Pentagon.” But, he will add, “No one has ever confirmed [the cause of the explosion] with me.” (Office of Medical History 9/2004, pp. 73-74)

Some witnesses say the crash at the Pentagon is “followed by an explosion about 15 minutes later that could be heard miles away,” according to the New York Times. This is “apparently the sound of a large portion of the Pentagon collapsing,” the Times will report. (van Natta and Alvarez 9/12/2001) However, that section of the Pentagon collapses at 10:15 a.m., more than 35 minutes after the crash (see 10:15 a.m. September 11, 2001). (Goldberg et al. 2007, pp. 19)