This page can be viewed at http://www.historycommons.org/entity.jsp?entity=clayton_waagner_1

Clayton Waagner was a participant or observer in the following events: 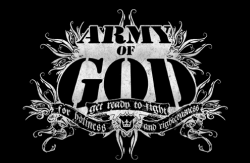 One of a number of semi-official logos for the Army of God. The logo depicts the organization’s slogan: ‘Get Ready to Fight for Holiness and Righteousness.’ [Source: ilovejesusforever (.com)]An anonymous member (or members) of the Army of God (see 1982, August 1982, and July 1988) produces the “Army of God Manual,” a privately printed, closely guarded “how-to” manual for activists, showing how to harass, attack, and even kill abortion providers. Years after its initial printing, the apparent leader of the movement, the Reverend Donald Spitz, will post on the Army of God Web site: “I first became aware of the Army of God Manual in the early ‘80s, when I was given a copy by another anti-abortionist. Apparently, it had been circulated among anti-abortionists throughout the country; unknown to the government, pro-aborts, or the media, for some time. Just how long it had been in circulation prior to my receiving a copy, I do not know.” (Army of God 1999)
Donald Spitz - Government documents will describe Spitz as the “webmaster” of the Army of God Web site, and the spiritual advisor to former minister Paul Hill, who will later be convicted of murdering a physician and his bodyguard (see July 29, 1994). Spitz will post running correspondence on the AOG site from anti-abortion activist Clayton Waagner, who will confess to sending over 550 letters containing fake anthrax to abortion clinics (see 1997-December 2001). He will also post numerous racist and homophobic diatribes on the AOG site. Spitz will be ejected from Operation Rescue, another anti-abortion group, in 1993 after the murder of Dr. David Gunn (see March 10, 1993); abortion doctor murderer John Salvi (see December 30, 1994 and After) will be found to have Spitz’s unlisted phone number after his arrest. A copy of the AOG manual will be found in 1993, buried in the backyard of an AOG member who will have attempted to murder an abortion provider (see August 19, 1993). (Extremist Groups: Information for Students 1/1/2006)
Methods of Disrupting, Bombing Clinics - Initially, the manual details a number ways of disrupting or closing down abortion clinics, from gluing locks and using butyric acid against clinic machinery to arson and bomb threats. The manual contains instructions for making bombs using plastic explosive. A November 1992 epilogue will advocate the murder of abortion providers. (Kushner 2003, pp. 38)
Interview - The manual also contains an undated interview with an anonymous member of the Army of God, conducted by an interviewer calling himself “The Mad Gluer.” The person interviewed says their intention is to “[d]rive the abortion industry underground with or without the sanction of government law,” using “[e]xplosives, predominantly.” The bombs are designed to “disarm… the murder weapons,” referring to the equipment used in abortion clinics, and “by disarming the persons perpetrating the crimes by removing their hands, or at least their thumbs below the second digit.” The interviewer says that such violence is not actually violence, because it “caus[es] my neighbor no longer to be able to murder innocent citizens.… No, don’t misunderstand me! The only rational way to respond to the knowledge of an imminent and brutal murder is direct action.” Told by the interviewer that “nobody can live” in a constant state of violence against abortion providers, the interview subject responds: “That’s the point. We must die in order that others might live.” The interviewer rejects the notion that Jesus Christ, Mahatma Gandhi, or Martin Luther King Jr. practiced non-violence to force social change. They say that “executing abortionists” is not the proper way to combat the practice of abortion, though “it [is] easily justified” by Biblical teaching. Rather, the Army of God “adheres to the principle of minimum force. Mercy, rather than justice is the driving force behind our actions. Or, to say it another way, we are merciful in our pursuit of justice, in our pursuit of peace.” The interview subject recommends that anyone who opposes abortion “should commit to destroying at least one death camp, or disarming at least one baby killer. The former is a relatively easy task—the latter could be quite difficult to accomplish. The preferred method for the novice would be gasoline and matches. Straight and easy. No tracks. You’ve kind of got to pour and light and leave real fast because of the flammability factor. Kerosene is great, but a little more traceable, so you will not want to buy it and use it in the same day.” Explosives using time-delay fuses are “my personal favorite,” the interviewer says. Asked about “chemical warfare,” the interviewer says, “I think that should remain classified information at this time.” In conclusion, the interviewer says: “We desperately need single lone rangers out there, who will commit to destroy one abortuary before they die. Most genuine pro-lifers praise and worship God when an abortuary is destroyed. It matters little what stripe of activist you are talking about. Rescuers, political activists, or covert operators are all thankful. And it’s common knowledge what the insurance costs are like after a good bombing.” (Army of God 1999)

Abortion providers and women’s clinics around the country receive over 550 mailings of suspicious white powder, accompanied by letters claiming the powder is laced with anthrax (see November 2001). All the anthrax mailings are determined to be hoaxes. Many of the accompanying letters are signed “Army of God, Virginia Dare Chapter” (see 1982, Early 1980s, and August 1982) or “Virginia Dare Cell.” The sender is determined to be anti-abortion activist Clayton Waagner. Arrested by authorities in 2000, Waagner escapes prison and remains at large for a year before being recaptured in December 2001; during his time as a fugitive, Waagner robs banks, buys weapons and surveillance equipment, steals cars, and stalks abortion clinics and clinic personnel. When he is arrested, Waagner has $10,000 in cash, as well as computer components and a loaded handgun in his stolen Mercedes-Benz. He soon confesses to sending the fake anthrax mailings. Waagner admits to signing many of the letters “Army of God,” referring to a violent anti-abortion group to which he belongs (see 1982). He will serve as his own attorney at trial, and be convicted on 51 of 53 federal charges. (Clarkson 2/19/2002; Kushner 2003, pp. 40; Extremist Groups: Information for Students 1/1/2006)

Scores of family planning clinics in at least 12 states have received letters containing anthrax threats, according to officials of feminist and abortion-rights organizations. Eleanor Smeal of the Feminist Majority Foundation says that over 200 clinics and advocacy organizations received letters in early November, all delivered in Federal Express envelopes. The envelopes that were opened contained a suspicious white powder and letters signed by the Army of God (AOG), a violent anti-abortion group (see 1982). This was the second such mailing in recent weeks; the first mailing was comprised of some 280 letters containing threatening letters and white powder purporting to be anthrax. None of the powder in any of the envelopes contained real anthrax; the letters were apparently hoaxes. Some of the letters in the latest mailings said: “You’ve ignored our earlier warnings. You’ve been exposed to the real thing. High-quality.” Groups targeted by the mailings include the Feminist Majority Foundation, the Center for Reproductive Law and Policy, Catholics for a Free Choice, Advocates for Youth, and the American Association of University Women. The persons responsible for the mailings somehow obtained the account numbers of two pro-choice organizations, the Planned Parenthood Federation of America and the National Abortion Federation, and used those accounts to pay for the mailings. The mailings have been traced to at least three drop-off locations in Virginia and Philadelphia. More packages are believed to be en route, and Federal Express is trying to intercept them. “I think the people responsible are despicable,” says Vicki Saporta of the National Abortion Federation. “They actually used our account number and our address, so our members would feel comfortable opening them.” Gloria Feldt, president of the Planned Parenthood Federation of America, says: “These letters are designed to terrorize us, and disrupt our work and our lives. That’s terrorism, plain and simple, and we take it very seriously.… The fact that they would forge the names of our staff members to terrorize employees is truly evil. Their heinous activities will not succeed.” Brian Emanuelson of the Connecticut Department of Environmental Protection says, “These were intended to be a threat to scare people and we want to make sure this is not what they say it is.” (CBS News 11/9/2001) The anthrax mailings were from anti-abortion activist and AOG member Clayton Waagner (see 1997-December 2001).

Journalist Daphne Eviatar writes that during the eight years of the Bush presidency, prosecutions and enforcement of the 1994 Freedom of Access to Clinic Entrances Act (FACE—see May 1994) “cratered,” with Justice Department officials refusing to prosecute or sometimes even investigate complaints of vandalism, harassment, and assault. After the recent murder of abortion provider Dr. George Tiller (see May 31, 2009), Eviatar and the Washington Independent obtained government data showing that enforcement of the FACE law, and other federal laws designed to protect abortion providers and clinics, declined by 75 percent during the Bush presidency. Between 1994 and 1999, when President Clinton was in office, the Justice Department filed 17 complaints under the FACE Act. Between 2001 and 2009, when President Bush was in office, the Justice Department only filed a single case. Tiller’s own clinic was vandalized numerous times, but complaints against the actions were ignored by the department. Statistics provided by the National Abortion Federation (NAF) show that over 3,200 acts of violence against abortion providers in the US and Canada were committed between 2000 and 2008, and the organization says the number of actual incidents was probably “much higher.” The number does not include threats, vandalism, and harassment. NAF statistics show that at least 17 cases of “extreme” violence against abortion providers in the US were reported, including arson, stabbings, bombings, and fake anthrax mailings. But the Bush Justice Department only prosecuted 11 individuals for these attacks. The two highest-profile anti-abortion prosecutions were those of anthrax mailer Clayton Waagner (see 1997-December 2001) and bomber Eric Rudolph (see April 14, 2005). However, none of Waagner’s or Rudolph’s associates in the extremist organization Army of God (see 1982) were ever prosecuted as accessories to the two activists’ crimes. Neither was the Army of God ever investigated as a potential domestic terrorist organization (see Early 1980s). (Eviatar 6/12/2009)