This page can be viewed at http://www.historycommons.org/entity.jsp?entity=comex

Comex was a participant or observer in the following events: 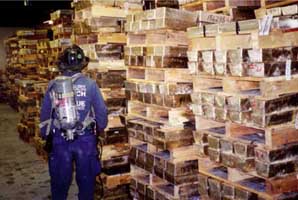 The Bank of Nova Scotia gold vault, located under WTC Building 4, is examined in late October 2001. [Source: Leslie E. Robertson and Associates]Workers at Ground Zero discover large amounts of gold and other precious metals stored below the ruins of the WTC. As debris is removed they are able to access parts of the 16-acre WTC basement, which drops 70 feet below ground level. Precious metals are stored in numerous vaults within this area. The London Times says the quantity of these “has been a carefully guarded secret,” but estimates $750 million of gold and silver in vaults belonging to the Comex metals trading division of the New York Mercantile Exchange. There appears to have been an attempt, since 9/11, to break into a Comex vault containing $200 million of precious metals belonging to the Bank of Nova Scotia. A government official involved in the recovery work says, “It looked like they used a blowtorch, a crowbar,” but a bank spokeswoman denies there has been any attempted break-in. The banks later states that “All of the silver, gold, platinum, and palladium stored in its vaults at 4 World Trade Center” has been relocated to a depository in Brooklyn. Other gold is discovered in a service tunnel below WTC 5. According to the London Times, this was being transported through the tunnel on the morning of 9/11 (see (Before 9:59 a.m.) September 11, 2001). (Gittrich, Zambito, and Standora 10/31/2001; Wapshott 11/1/2001; Dwyer 11/1/2001; Reuters 11/17/2001)