This page can be viewed at http://www.historycommons.org/entity.jsp?entity=council_of_economic_advisers_1

Council of Economic Advisers was a participant or observer in the following events: 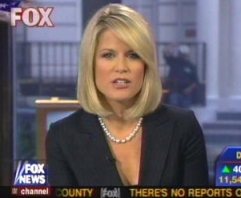 Martha MacCallum. [Source: The Activity Pit]Fox News anchor Martha MacCallum, host of Fox’s “straight news” show The Live Desk, airs clips of Vice President Joseph Biden taken during a September 2008 campaign event to falsely imply that Biden is contradicting the Obama administration’s current stance on the economy. MacCallum tells viewers that “after weeks of economic doom and gloom, the Obama administration is now singing a slightly different tune. Take a look at what was said in recent interviews this weekend.” Fox then airs a clip of Biden telling an audience, “The fundamentals of the economy are strong.” The clip is not from an interview held over the weekend, but from a campaign event held seven months before. MacCallum does not inform her viewers of the timing of the clip, nor does she note that Biden was criticizing Republican presidential candidate John McCain’s economic views, which he characterized as unrealistically rosy. Instead, she goes on to claim that the administration has fundamentally, and dishonestly, shifted its views on the economy from a positive campaign outlook to a more “doom and gloom” viewpoint. In the September 2008 campaign rally, Biden told a Michigan audience: “I believe that’s why John McCain could say with a straight face, as recently as this morning—and this is a quote, ‘The fundamentals of the economy are strong.’ That’s what John says. He says that ‘we’ve made great progress economically’ in the Bush years.… I could walk from here to Lansing, and I wouldn’t run into a single person who thought our economy was doing well, unless I ran into John McCain.” Alongside the Biden clip, Fox also airs footage of Austan Goolsbee, a member of the White House Council of Economic Advisers. On March 15, Goolsbee told a Fox News Sunday audience that “the core strength of the economy is middle-class workers.” Fox airs that clip immediately after the Biden clip. What it does not air is Goolsbee’s statement just after the broadcast statement, in which he said, “Over the last eight years, before this president came into office, we saw an unbelievable squeeze on the middle class like nothing we have seen in decades.” MacCallum uses the clips to accuse the Obama administration of “singing… a bit of a different tune” now than during the campaign. (Media Matters 3/16/2009) The next day, MacCallum apologizes for asserting the seven-month-old clip was recent. She tells viewers that Fox News “inadvertently used a piece of video of Vice President Biden saying that, quote, the fundamentals of the economy are strong. This video was from the campaign trail, when the vice president was a candidate, and was actually quoting Senator John McCain. When we get something wrong, we admit it. We did so yesterday, and for that, we apologize” (see October 13, 2009). (Media Matters 3/17/2009)

The progressive media watchdog organization Media Matters disproves a number of “factual” claims in a recent article by conservative author Dinesh D’Souza, who claims that President Obama is driven by “anticolonial” rage sparked by his alleged identification with his Kenyan father (see September 12, 2010). Media Matters notes the following:

D’Souza claims that Obama “supported the conditional release” of Abdel Baset al-Megrahi, the “Lockerbie Bomber,” because he sees al-Megrahi as a “fellow anticolonialist,” when in reality the Obama administration informed Scotland that it opposed al-Megrahi’s release.

D’Souza claims that Obama supports “oil drilling off the coast of Brazil but not in America,” in the form of a $2 billion Export-Import (Ex-Im) Bank loan to Brazil for exploratory drilling. In reality, the Obama administration had no say in the Ex-Im’s decision, and all five members of the bank’s board of directors were Bush administration appointees. (Forbes will conduct a fact-check after publication that garners harsh criticism from the bank over D’Souza’s misrepresentation of facts—see September 23-24, 2010.)

D’Souza claims that Obama spent the first 17 years of his life “in Hawaii, Indonesia, and Pakistan.” D’Souza admits that he erred in this claim, as Obama never visited Pakistan until he was 20, and then only for three weeks.

D’Souza claims that Obama’s June 2010 speech in response to the Gulf oil spill did not focus on cleanup strategies, but instead lambasted the US for its outsized oil consumption. While Obama did mention America’s disproportionate oil consumption, the central focus of his speech was the federal government’s response to the spill. (Forbes will correct this error and acknowledge that Obama’s speech indeed focused on cleaning up the oil spill—see September 23-24, 2010.)

D’Souza claims that a controversial New York City Islamic center, which he calls a “mosque,” is to be built “near the site where terrorists in the name of Islam brought down the World Trade Center… at Ground Zero.” In reality, the proposed Islamic community center, Cordoba House (later renamed Park51), is two city blocks away from the site of the World Trade Center.

D’Souza claims that Obama sees his father as a “hero” who “represented a great and noble cause.” In reality, Obama’s memoir, Dreams from My Father, offered a largely critical portrait of Obama’s father. As Washington Post media critic Howard Kurtz notes, “[T]hat book describes a young man’s struggle to understand his African roots and the father he never really knew, and offers a largely critical portrait of the Harvard-educated man who left his family.” Media Matters cites numerous other historians and reviewers who read Obama’s memoir as being highly critical of his father. As Reason Magazine’s Tim Cavanaugh wrote on the day D’Souza’s article was published, the memoir is “a narrative of Obama’s non-relationship with his father,” and continued, “[T]here is no evidence for the claim that the elder Obama bequeathed his son a coherent or even a partial political philosophy.”

D’Souza claims that Obama opposes US military action in Afghanistan, because of his “anticolonial” bent. In reality, Obama campaigned on the idea that the US invasion of Afghanistan was an “absolutely vital” response to 9/11, and has made statements to that effect as far back as October 2001. As president, Obama has increased troop levels in Afghanistan and has said that US “security is at stake in Afghanistan.”

D’Souza claims that Obama views “free market” as “code words for economic plunder,” saying that Obama views “the rich as an oppressive class, a kind of neocolonial power within America.” In reality, Obama has repeatedly praised the free market, and has consistently supported America’s large and small businesses in his economic policies. (Media Matters 9/16/2010)