This page can be viewed at http://www.historycommons.org/entity.jsp?entity=crown_vigilance

Crown Vigilance was a participant or observer in the following events: 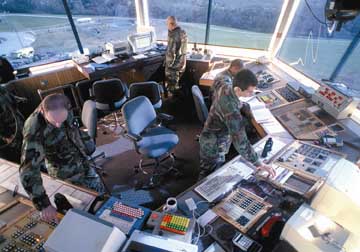 Offutt Air Force Base control tower during Global Guardian 1998. [Source: Jeffery S. Viano]As the 9/11 attacks are taking place, a large military training exercise called Global Guardian is said to be “in full swing.” It has been going on since the previous week. (Dejka 2/27/2002; Buttry 9/10/2002) Global Guardian is an annual exercise sponsored by US Strategic Command (Stratcom) in cooperation with US Space Command and NORAD. One military author defines Stratcom as “the single US military command responsible for the day-to-day readiness of America’s nuclear forces.” (Arkin 2005, pp. 59)
Exercise Tests Military's Ability to Fight a Nuclear War - Global Guardian is a global readiness exercise involving all Stratcom forces and aims to test Stratcom’s ability to fight a nuclear war. It is one of many “practice Armageddons” that the US military routinely stages. (Arkin 11/1/1997; Ruff 2/21/2002; Dejka 2/27/2002; Buttry 9/10/2002) It links with a number of other military exercises, including Crown Vigilance (an Air Combat Command exercise), Apollo Guardian (a US Space Command exercise), and the NORAD exercises Vigilant Guardian and Amalgam Warrior. (US Department of Defense 5/1997; GlobalSecurity (.org) 4/27/2005) Global Guardian is both a command post and a field training exercise, and is based around a fictitious scenario designed to test the ability of Stratcom and its component forces to deter a military attack against the US. Hundreds of military personnel are involved. (US Congress n.d.; Wasiak 12/1999

; Villafuerte 9/8/2002) The exercise involves “a lot of the elements of what ultimately would be the nuclear command and control system in support of a national emergency,” according to Admiral Richard Mies, the commander in chief of Stratcom. It includes an “exercise secretary of defense” and “an exercise president.” Mies will say that because of the exercise, “A lot of [Stratcom’s] command and control systems that, in peacetime, are normally not on alert were at a much, much higher state of alert [on September 11] and we had a number of aircraft, manned control aircraft that were airborne that were simulating their wartime roles.” (Kelly 12/27/2011)
Exercise Normally Held in October or November - According to a 1998 Internet article by the British American Security Information Council—an independent research organization—Global Guardian is held in October or November each year. (Kristensen 10/1998) In his book Code Names, NBC News military analyst William Arkin dates this exercise for October 22-31, 2001. (Arkin 2005, pp. 379) And a military newspaper reported in March 2001 that Global Guardian was scheduled for October 2001. (Space Observer 3/23/2001, pp. 2

) If this is correct, then some time after March, the exercise must have been rescheduled for early September.
Exercise Includes a 'Computer Network Attack' - Furthermore, a 1998 Defense Department newsletter reported that for several years Stratcom had been incorporating a computer network attack (CNA) into Global Guardian. The attack involved Stratcom “red team” members and other organizations acting as enemy agents, and included attempts to penetrate the command using the Internet and a “bad” insider who had access to a key command and control system. The attackers “war dialed” the phones to tie them up and sent faxes to numerous fax machines throughout the Command. They also claimed they were able to shut down Stratcom’s systems. Reportedly, Stratcom planned to increase the level of computer network attack in future Global Guardian exercises. (Parker 6/1998

) It is unclear if a computer network attack is incorporated into Global Guardian in 2001.