This page can be viewed at http://www.historycommons.org/entity.jsp?entity=dakota_meyer_1

Dakota Meyer was a participant or observer in the following events:

Marine Corporal Dakota Meyer ignores orders to remain in place and leads five forays into a ravine outside the village of Ganjigal, Afghanistan, after members of his column are ambushed by Taliban while attempting a meeting with the village elders. Meyer and Staff Sergeant Juan J. Rodriguez-Chavez, who are off to a flank and not inside the ambush, rush in and rescue several trapped American and Afghan soldiers after Captain Will Swenson of the US Army calls for artillery support and the request is denied. Meyer, Rodriguez-Chavez, Swenson, and others also retrieve the remains of three fallen Marines and one Navy corpsman. (Chivers 9/15/2011) Meyer will later be given the Congressional Medal of Honor for his actions (see September 15, 2011) (Chivers 9/15/2011) and Rodriguez-Chavez will receive the Navy Cross. (Shaughnessy 6/10/2011)
Limits and Dangers of Counterinsurgency Theory - The event will later be examined and used as an example of the problems that can occur with the counterinsurgency theory that has been pressed upon the troops by the Pentagon. The villagers’ betrayal to the Taliban, ambiguous lines of command, and refusal of help from nearby units will all been documented as the kinds of problems that enlisted soldiers typically face in Afghanistan. (Chivers 9/15/2011)

Marine Sergeant Dakota Meyer receives an honorable discharge from the Marines. He will later receive a Congressional Medal of Honor (see September 15, 2011) for his actions in combat in Afghanistan (see September 8, 2009). (Chivers 9/15/2011; District Court of Bexar County, TX 11/28/2011)

June 2010 - March 2011: Former Marine Works for AUSGAR Technologies to Train US Troops in Use of Imaging to Find IEDs

Dakota Meyer, an inactive reserve Marine sergeant (see May 2010), goes to work for AUSGAR Technologies in June 2010 and stays there until March 2011, at which time he goes to work for BAE Systems OASYS, LLC (see March 2011). His work at AUSGAR largely consists of training troops to locate improvised explosive devices (IEDs) with thermal imaging and optical equipment, tools that are most often used by snipers. (District Court of Bexar County, TX 11/28/2011; Barnes 11/29/2011)

Inactive Reserve Marine Sergeant Dakota Meyer, whose actions in eastern Afghanistan (see September 8, 2009) military writer Bing West called “the greatest act of courage in the war [in Afghanistan]” (West 2/22/2011, pp. 98-111) , is reported to be under consideration for the Congressional Medal of Honor. (Lamothe 11/8/2010) Meyer is working with AUSGAR Technologies at this time (see June 2010 - March 2011).

Inactive reserve Marine sergeant and employee of BAE Systems Dakota Meyer (see March 2011), having learned from Bobbie McCreight that BAE plans to sell advanced thermal optics scopes—PAS-13s—to Pakistan (see April 2011), sends McCreight an email detailing his objections. In the email, Meyer states that BAE is planning to sell the better equipment to Pakistan while US troops are supplied with less effective equipment. He further states that the Pakistani military has been known to shoot at US soldiers and therefore it puts US soldiers at risk to sell Pakistan the better equipment. Meyer writes: “The reason I came on with BAE OASYS was to use the knowledge I had gained from the experiences I had while serving in combat operations to improve gear and make items to save the lives of US troops. This is where I could see me still ‘doing my part’ for the guys who are in the same situation I was in 18 months ago. I feel that by selling this to Pakistan we are doing nothing but the exact opposite. We are simply taking the best gear, the best technology on the market to date and giving it to guys that are known to stab us in the back.… These are the same people who are killing our guys.… I think that one of the most disturbing facts to the whole thing is that we are still going forth with the PAS-13 optic and issuing these outdated sub-par optics to our own US troops when we have better optics we can put in their hands right now but we are willing to sell it to Pakistan. This is very disturbing to me as an American and as a United States Marine.” (District Court of Bexar County, TX 11/28/2011)

Before May 31, 2011: Employee of BAE Systems Seeks Position at AUSGAR over BAE’s Intent to Sell Weapon System to Pakistan

May 31, 2011: Employee of BAE Systems Resigns over Company’s Intent to Sell Weapon System to Pakistan

After inactive Reserve Marine Sergeant Dakota Meyer resigned from his job at BAE Systems over BAE’s intended sale of PAS-13 thermal optical scopes to Pakistan (see May 31, 2011) and is slotted to get a position with his former employer AUSGAR Technolgies (see Before May 31, 2011), he receives an email from an employee of AUSGAR stating that his re-hire has been blocked by Pentagon program manager Robert Higginson. (Barnes 11/29/2011)

After being informed that his rehire at AUSGAR Technologies has been blocked by program manager Robert Higginson at the Pentagon (see June 1, 2011), former Marine Sergeant Dakota Meyer files a defamation lawsuit against BAE Systems, his former employer, and his supervisor at BAE, Bobby McCreight. (Barnes 11/29/2011) 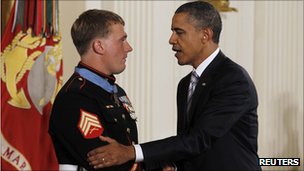 President Obama presents Marine Sergeant Dakota Meyer with the Medal of Honor. [Source: Reuters]President Obama presents Sergeant Dakota Meyer with the Congressional Medal of Honor for actions in combat against Pakistani insurgents (in some media accounts they are labelled simply as “Taliban”) in Ganjigal, Afghanistan (see September 8, 2009 and November 8, 2010). (Chivers 9/15/2011)

Court papers are filed in Medal of Honor recipient Sergeant Dakota Meyer’s (see September 15, 2011) defamation of character lawsuit in the district court of Bexar County (San Antonio), Texas (see After June 1, 2011). The suit is against Meyer’s former employer BAE Systems (a British-owned defense contractor that has contracts with the US government) and supervisor Bobbie McCreight. Meyer’s legal team writes in the court documents that the defamation came after Meyer expressed concern over BAE’s intent to sell PAS-13s (advanced optic scopes) to Pakistan (see April 2011 and April 29, 2011). The court filing also alleges that BAE prevented his hiring by another defense contractor, AUSGAR Technologies (see Before May 31, 2011 and May 31, 2011), by telling Pentagon program manager Robert Higginson on the phone that Meyer was mentally unstable and had a drinking problem. The phone conversation is said to have occurred at some point in the last 10 days of May 2011, according to the filing. (District Court of Bexar County, TX 11/28/2011; BBC 11/30/2011; Agence France-Presse 11/30/2011; Washington Business Journal 11/30/2011)