This page can be viewed at http://www.historycommons.org/entity.jsp?entity=dale_jakes_1

Dale Jakes was a participant or observer in the following events: 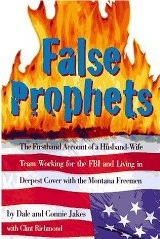 The cover of ‘False Prophets.’ [Source: Amazon (.com)]Dale Jakes and his wife Connie Jakes release a new book, False Prophets, that details their experiences as FBI informants who infiltrated the Montana Freemen for 14 months in 1995 and early 1996 (see 1993-1994). The Jakes write that they collected enormous amounts of information for the FBI. Dale Jakes was welcomed by the Freemen because of his knowledge of explosives, and Connie Jakes became the group’s unofficial office manager. They left the group shortly before the March 1996 standoff between the Freemen and law enforcement authorities (see March 25, 1996). The two also collected information on dozens of other extremist groups that the Freemen were in contact with, including many who came to visit the Freemen and take what Dale Jakes calls “basic hate courses” in ideology and financial fraud (see September 28, 1995 and After). The Jakes say that the FBI delayed attempts to arrest the Freemen leaders to give the Jakes the chance to collect more data. A former sheriff’s deputy for the area confirms that the two did work for the FBI. Dale Jakes says that one of the more worrisome moments came when a group of Freemen assaulted an ABC News crew and chased them off the property (see October 2, 1995). “Unknown to the film crew, four high-powered rifles with scopes were trained on the driver and his passenger,” Jakes says. “In the cabin, a debate raged among the Freemen leaders as to whether or not to ‘shoot them.’” (Associated Press 5/12/1998)