This page can be viewed at http://www.historycommons.org/entity.jsp?entity=dan_savage_1

Dan Savage was a participant or observer in the following events:

May 15, 2003 and After: Gay Activist Uses Internet to Retaliate against Negative Comments by US Senator 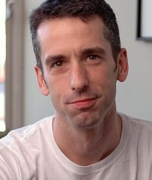 Dan Savage. [Source: The Advocate]Gay activist Dan Savage, angered at recent comments by Senator Rick Santorum equating gay sex with bestiality and child rape (see April 7, 2003) and Santorum’s refusal to apologize for his remarks (see April 23, 2003 and After), decides to strike back. Writing on the online news blog The Stranger, Savage relays the following suggestion from a commenter: “I’m a 23-year-old gay male who’s been following the Rick Santorum scandal, and I have a proposal. Washington and the press seem content to let Santorum’s comments fade into political oblivion, so I say the gay community should welcome this ‘inclusive’ man with open arms. That’s right; if Rick Santorum wants to invite himself into the bedrooms of gays and lesbians (and their dogs), I say we ‘include’ him in our sex lives—by naming a gay sex act after him. Here’s where you come in, Dan. Ask your readers to write in and vote on which gay sex act is worthy of the Rick Santorum moniker.… You pick the best suggestions, and we all get to vote! And then, voilà! This episode will never be forgotten!” Savage agrees, and asks readers to send in their suggestions. (Dan Savage 5/15/2003) One reader writes, “Specifically, I nominate the frothy mixture of lube and fecal matter that is sometimes the byproduct of anal sex,” and the suggestion wins Savage’s poll. (Dan Savage 5/29/2003; Dan Savage 6/12/2003) In November 2003, Savage creates a Web site, “Spreading Santorum,” featuring the definition as its home-page content. Many other Web sites begin linking to it, and soon the site becomes Number One in Google search results, giving Savage’s rather crude definition as the first result Web surfers get when searching for information about Santorum. Savage, other gay activists, and others continue linking to the site, keeping the “Spreading Santorum” site on top of the Google listings for several years. (Spreading Santorum 2003; Dwyer 5/10/2011; McGlynn 7/27/2011) Savage’s technique for achieving and keeping a top ranking in Google is known as “Google bombing” the search engine. Google will refuse repeated requests to purge Savage’s blog from its rankings. In February 2011, Santorum will say: “It’s one guy. You know who it is. The Internet allows for this type of vulgarity to circulate. It’s unfortunate that we have someone who obviously has some issues. But he has an opportunity to speak.… You want to talk about incivility. I don’t know of anybody on the left who came to my defense for the incivility with respect to those things.” (Peoples 2/16/2011)