This page can be viewed at http://www.historycommons.org/entity.jsp?entity=darius_rejali

Positions that Darius Rejali has held:

Darius Rejali was a participant or observer in the following events:

1800 and After: Waterboarding Banned by European Governments 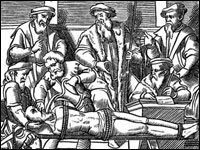 Woodcut depicting waterboarding included in J. Damhoudere’s ‘Praxis Rerum Criminalium,’ Antwerp, 1556. [Source: NPR]With the advent of the “Enlightenment,” many countries ban the practice of waterboarding, with at least one calling it “morally repugnant.” Waterboarding has been around since the 14th century, known variously as “water torture,” the “water cure,” or tormenta de toca, a phrase that refers to the thin piece of cloth placed over the victim’s mouth. Officials for the Spanish Inquisition were among those who waterboarded prisoners; the Inquisition, recognizing the potentially lethal effect of the practice, required a doctor to be present when a prisoner was waterboarded. Historian Henry Charles Lea, in his book A History of the Inquisition of Spain, will describe waterboarding as follows: “The patient strangled and gasped and suffocated and, at intervals, the toca was withdrawn and he was adjured to tell the truth. The severity of the infliction was measured by the number of jars [of water] consumed, sometimes reaching to six or eight.” Waterboarding actually refers to two separate interrogation techniques: one involving water being pumped directly into the stomach, and another that features the steady streaming of water into the throat. The first, according to author Darius Rejali, “creates intense pain. It feels like your organs are on fire.” The second will be the method later preferred by US interrogators, who will use it on suspected terrorists. This method is a form of “slow motion drowning” perfected by Dutch traders in the 17th century, when they used it against their British rivals in the East Indies. In 2007, reporter Eric Weiner will write: “[W]aterboarding has changed very little in the past 500 years. It still relies on the innate fear of drowning and suffocating to coerce confessions.” (Weiner 11/3/2007)