This page can be viewed at http://www.historycommons.org/entity.jsp?entity=david_canoles_1

David Canoles was a participant or observer in the following events:

8:24 a.m. September 11, 2001: Boston Air Traffic Controllers Hear Flight 11 Hijacker Say, ‘We Have Some Planes,’ but Uncertain of Origin of Transmission 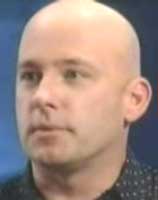 Pete Zalewski. [Source: NBC]Because the talkback button on Flight 11 has been activated, Boston Center air traffic controllers can hear a hijacker on board say to the passengers: “We have some planes. Just stay quiet and you’ll be OK. We are returning to the airport.” (Johnson 11/23/2001; 9/11 Commission 7/24/2004, pp. 19) Air traffic controller Pete Zalewski recognizes this as a foreign, Middle Eastern-sounding voice, but does not make out the specific words “we have some planes.” He responds, “Who’s trying to call me?” Seconds later, in the next transmission, the hijacker continues: “Nobody move. Everything will be OK. If you try to make any moves you’ll endanger yourself and the airplane. Just stay quiet.” (Wald and Sack 10/16/2001; 9/11 Commission 6/17/2004; MSNBC 9/9/2006) Bill Peacock, the FAA director of air traffic services, later claims, “We didn’t know where the transmission came from, what was said and who said it.” David Canoles, the FAA’s manager of air traffic evaluations and investigations, adds: “The broadcast wasn’t attributed to a flight. Nobody gave a flight number.” (Murray 9/11/2002) Similarly, an early FAA report will state that both these transmissions came from “an unknown origin.” (Federal Aviation Administration 9/17/2001

) Zalewski asks for an assistant to help listen to the transmissions coming from the plane, and puts its frequency on speakers so others at Boston Center can hear. Because Zalewski didn’t understand the initial hijacker communication from Flight 11, the manager of Boston Center instructs the center’s quality assurance specialist to “pull the tape” of the transmission, listen to it carefully, and then report back. They do this, and by about 9:03 a.m. a Boston manager will report having deciphered what was said in the first hijacker transmission (see 9:03 a.m. September 11, 2001). (9/11 Commission 6/17/2004; MSNBC 9/9/2006) Fellow Boston controller Don Jeffroy also hears the tape of the hijacker transmissions, though he doesn’t state at what time. He says: “I heard exactly what Pete [Zalewski] heard. And we had to actually listen to it a couple of times just to make sure that we were hearing what we heard.” (MSNBC 9/11/2002) At some point, Ben Sliney, the national operations manager at the FAA’s Herndon Command Center, gets word of the “We have some planes” message, and later says the phrase haunts him all morning. American Airlines Executive Vice President for Operations Gerard Arpey is also informed of the “strange transmissions from Flight 11” at some point prior to when it crashes at 8:46 a.m. (Levin, Adams, and Morrison 8/12/2002) Boston Center will receive a third transmission from Flight 11 about ten minutes later (see (8:34 a.m.) September 11, 2001).

David Canoles. [Source: C-SPAN]Officials at FAA headquarters in Washington, DC, follow an unidentified aircraft—presumably Flight 77—that is approaching the capital as its progress is reported over a teleconference. (Levin, Adams, and Morrison 8/12/2002; Freni 2003, pp. 34) Air traffic controllers at the Terminal Radar Approach Control (TRACON) at Washington Dulles International Airport noticed the track of an aircraft flying rapidly east toward Washington on their radar screens at 9:32 a.m., according to the 9/11 Commission Report (see 9:32 a.m. September 11, 2001). (9/11 Commission 7/24/2004, pp. 25) Since then, the operations supervisor at the TRACON has been providing continuous updates over an FAA teleconference. (Federal Aviation Administration 9/17/2001

) At FAA headquarters, David Canoles, the FAA’s manager of air traffic evaluations and investigations, is participating in the teleconference and listens as the operations supervisor reports a “fast-moving target moving towards Washington.” The operations supervisor keeps describing the location of the aircraft. “Six miles from the White House,” they say, followed by, “Five miles from the White House.” Canoles realizes the aircraft is virtually on top of FAA headquarters and wonders if his building is its target. He instructs his colleague, Jeffrey Loague, to see if he can spot the aircraft out the window of the adjacent office. Canoles hears the operations supervisor reporting, “The aircraft is circling; it’s turning away from the White House” (see 9:34 a.m.- 9:37 a.m. September 11, 2001), followed by, “It’s gone,” when the aircraft disappears from radar. Meanwhile, Loague notices the aircraft out of the window as it descends toward the Pentagon, according to author Pamela Freni. “I see something!” he yells. He describes the plane’s progress as it loses altitude and then disappears behind the buildings that surround the Pentagon. “Oh, my God!” he utters, when he then sees smoke rising into the air. (Levin, Adams, and Morrison 8/12/2002; Freni 2003, pp. 34-35; 9/11 Commission 3/25/2004) However, according to other accounts, Logue apparently does not report seeing the aircraft descending. Instead, he returns to the room after it crashes and tells Canoles only that he has seen smoke coming from the Pentagon. (ABC News 8/12/2002; 9/11 Commission 3/25/2004)

Sabra Kaulia. [Source: Aircraft Owners and Pilots Association]The US Air Force liaison to the FAA joins a teleconference that has been established by the FAA shortly after the time of the Pentagon attack, according to her own later recollections, although an FAA statement will claim she joined it significantly earlier. (9/11 Commission 5/23/2003; 9/11 Commission 3/26/2004; US Department of Transportation 8/31/2006

)
Watches Television, Does Not Join Teleconference - The Air Force liaison, Colonel Sheryl Atkins, will recall that she arrived at FAA headquarters in Washington, DC, around five to 10 minutes after the first attack in New York (see (Between 8:51 a.m. and 8:56 a.m.) September 11, 2001), and went to her fourth-floor office there. She will describe: “Everybody was there around the TV. We watched the events unfold. At first, we were kind of hanging back and saying, you know, ‘there’s something awful going on with the air traffic system.‘… But at a certain point, not too long after that, it became obvious that, you know, something really strange is going on.”
Heads to Situation Room - Shortly after 9:37 a.m., when the Pentagon is hit, Atkins hears CNN reporting a bomb may have gone off at the Pentagon. She will recall that she then heads up to the 10th floor of the headquarters building along with Sabra Kaulia, the program director for air traffic airspace management, and goes to the air traffic situation room, where David Canoles, the FAA’s manager of air traffic evaluations and investigations, is participating in a teleconference. (9/11 Commission 3/26/2004; US Department of Transportation 8/31/2006

) According to a 2003 statement provided by the FAA, the FAA established this teleconference with several other agencies “[w]ithin minutes” of the first attack in New York (see (8:50 a.m.) September 11, 2001). (9/11 Commission 5/23/2003) Atkins will say she is then “in and out” of the air traffic situation room throughout the morning. She does not speak with any of the military representatives at the White House, but does work directly with Steve Nolte, the airspace manager at NORAD, and also communicates with Lieutenant Colonel Michael-Anne Cherry, who is at the FAA’s Herndon Command Center, to exchange information. (9/11 Commission 3/26/2004)
FAA Claims Atkins Joined Teleconference Earlier - In a 2003 statement it provides to the 9/11 Commission the FAA will say Atkins joined the teleconference significantly earlier than she claims. According to the statement, the “US Air Force liaison to the FAA [i.e. Atkins] immediately joined the FAA headquarters phone bridge” that was set up minutes after the first attack in New York, “and established contact with NORAD on a separate line.” (9/11 Commission 5/23/2003)
Other Liaisons Arrive Later On - As well as Atkins, who represents the Air Force, liaisons representing the other three military services within the Department of Defense (the Army, the Navy, and the Marine Corps) work at FAA headquarters. However, Atkins is the only military liaison currently there. The Navy and Marine Corps liaisons will arrive at FAA headquarters at around 10:30 a.m. and join Atkins on the building’s 10th floor, from where they help establish and maintain critical communications channels between the Defense Department and the FAA. The Army liaison will not arrive at FAA headquarters until the following day. (Federal Aviation Administration 3/21/2002; 9/11 Commission 3/26/2004)

At FAA headquarters in Washington, DC, David Canoles, the FAA’s manager of air traffic evaluations and investigations, and his staff begin coordinating the collection of forensic evidence that might clarify how the morning’s attacks unfolded. They coordinate the capture and copying of radar track data showing the paths of the four hijacked planes, and obtain air traffic control voice tapes from every facility that had spoken with these planes. FAA Assistant Investigations Manager Tony Mello and other employees will work for most of the afternoon, all night, and part of the following day, gathering data and coordinating with the FBI, Secret Service, Defense Department, White House, and National Transportation Safety Board, making sure these other agencies receive as much evidence as is available. Radar tracks are crudely plotted, showing the flight paths of the four jets, and voice tapes are transcribed. Having been stuck in Chicago when the attacks occurred, (see 8:30 a.m. September 11, 2001), Tony Ferrante, the manager of FAA investigations, will finally arrive at FAA headquarters at 5:00 a.m. on September 12. His first priority is “to ensure that the radar data and voice tapes from every location involved in the attack [are] put under lock and key as soon as possible,” presumably to be kept safe for any investigations. He looks at and listens to the relevant controller tapes, and begins constructing a detailed timeline of the four hijacked aircraft. Along with Tony Mello and others of his staff, Ferrante will spend several days working out the movements of the four planes. FAA radar experts Dan Diggins and Doug Gould will also spend days interpreting the radar tracks of the four planes, piecing together a detailed timeline of their actions from takeoff to crash. (Freni 2003, pp. 74 and 76-77) The FAA will publish a fairly comprehensive chronology of the hijackings on September 17, though this will not be made public until September 2005. (Federal Aviation Administration 9/17/2001

; National Security Archive 9/9/2005) Presently, it refers any media requests for flight patterns to Flight Explorer, a software company that makes charts of plane routes using information from the FAA’s radar system (see After 8:46 a.m. September 11, 2001). (McCarthy 9/13/2001) The US military has also started doing its own reconstructions of the radar data for the hijacked aircraft (see (11:30 a.m.) September 11, 2001).