This page can be viewed at http://www.historycommons.org/entity.jsp?entity=david_gelernter_1

David Gelernter was a participant or observer in the following events:

An FBI recreation of one of the Unabomber’s explosive devices, on display at the Newseum in Washington, DC. [Source: Newseum / Wikimedia]Computer scientist David Gelernter of Yale University opens a package mailed to his office. The package contains a bomb. It explodes in Gelernter’s hands, severely injuring and ultimately disfiguring him. (BBC 11/12/1987; Washington Post 1998) The school’s sprinkler system douses a small blaze started by the bomb. Gelernter is in shock from his injuries; he races down five flights of stairs to the infirmary, dripping blood and fending off bystanders with cries of “Leave me alone!” He suffers extensive injuries to his abdomen, chest, face, and hands. Within a day, the Gelernter bombing is added to the “UNABOM” list of serial bombings, along with the University of California bombing from two days earlier (see June 22, 1993). Federal authorities are dismayed that the “Unabomber” bombings have restarted after more than six years of inactivity (see February 20, 1987). Gelernter may have been targeted because of his invention of a computer language that allows desktop computers to process information in a much more powerful fashion. FBI Director William Sessions says: “The FBI will go back and look at all the bombings of a similar character. It’s the logical thing to be done, and it will be done.” (Washington Post 6/25/1993) The bombing will later be shown to be the work of Theodore “Ted” Kaczynski, the so-called “Unabomber” (see April 3, 1996).

Theodore “Ted” Kaczynski, the so-called “Unabomber” (see April 3, 1996 and June 9, 1996), interrupts the first day of his murder trial by asking to meet privately with the judge to demand replacements for his defense lawyers—and perhaps to defend himself—and to protest his brother David Kaczynski’s presence in the courtroom. (Washington Post 1998) Kaczynski halts the proceedings before the jury enters the courtroom by telling Judge Garland Burrell Jr. that he has a “very important” statement to make about his relationship with his attorneys. “Your honor, before these proceedings begin, I would like to revisit the issue of my relationship with my attorneys,” Kaczynski says. “It’s very important. I haven’t stood because I’m under orders from the marshals not to stand up.” Kacynzski spends four hours in chamber with Burrell and his lawyers. It is believed that Kaczynski is fighting against his lawyers’ attempt to portray him as mentally ill (see November 9, 1997)—a “sickie,” as he has termed it in his journals. At least two mental health experts hired by the defense have found that Kaczynski suffers from the delusions of a paranoid schizophrenic. Kaczynski has refused to be examined by government psychiatrists, and has cut off interviews with his own doctors when they broached the subject of his possible mental illness. As a result, defense attempts to present evidence that Kaczynski is mentally ill have been hampered, and prosecutors have refused to countenance any attempts at a plea bargain that would spare Kaczynski the death penalty (see December 30, 1997). Kaczynski’s brother has been one of the strongest and most impassioned advocates for Kaczynski’s classification as mentally ill, which would spare Kaczynski from execution. Two victims of Kaczynski’s bombs, Charles Epstein (see June 22, 1993) and David Gelernter (see June 24, 1993), disagree; both say that Kaczynski should die for his crimes. Lead prosecutor Robert J. Cleary (see April 11, 1996) demands in court that Burrell “firmly and finally” resolve the disagreements between Kaczynski and his lawyers. Burrell says he is trying, but notes that difficulties prevent him from quickly resolving the dispute: “A criminal proceeding sometimes involves dynamics that a judge has to react to,” he says. (Booth 1/5/1998) Defense counsel Judy Clarke says Kaczynski “simply cannot endure” being portrayed as mentally ill, and notes that he has harbored an abiding fear throughout his life that people will consider him insane. Such resistance to being considered mentally ill is symptomatic of his paranoid schizophrenia, Clarke says. Outside the courthouse, Clarke says that Kaczynski’s request to represent himself “is a tragedy at its worst,” and denies that Kaczynski is attempting to stall the trial. “This is not manipulation. This is not cunning,” she says. “This is not someone trying to avoid legal responsibility.” Anthony Bisceglie, the lawyer for David Kaczynski, says the Kaczynski family believes that allowing him to act as his own attorney would be “to allow him to participate in a federally assisted suicide.” (Booth 1/8/1998) The judge will reject Kaczynski’s demands (see January 7, 1998).

After a federal judge rejects a request by Theodore “Ted” Kaczynski, the so-called “Unabomber” (see April 3, 1996 and June 9, 1996), to represent himself in court (see January 21, 1998), Kaczynski pleads guilty to being the Unabomber and to committing two murders. (Washington Post 1998; Booth 1/23/1998) “Do you understand you will spend the rest of your life in prison?” Judge Garland Burrell Jr. asks Kaczynski. “Yes, your honor,” Kaczynski replies. The guilty plea is part of a deal that will spare Kaczynski the death penalty (see January 12, 1998). The last-minute deal features Kaczynski pleading guilty to 13 counts of transporting explosive devices with the intent to kill or maim. Kaczynski also pleads guilty to all federal charges against him, including a case not yet presented in New Jersey, comprising five other bombings. He also admits to planting or mailing 13 other bombs for which he has not been charged. After the guilty verdict is handed down, lead prosecutor Robert J. Cleary says, “The Unabomber’s career is over.” Cleary says the government accepted the plea because the only stipulation is that Kaczynski not be executed for his crimes. As part of the plea deal, Kaczynski waives his right to appeal his convictions. (Booth 1/23/1998; Claiborne 8/21/1998) Kaczynski’s brother David, who informed FBI agents that he thought his brother might be the Unabomber (see January-March 1996 and After), says he is relieved that the ordeal of the trial is over and pleased that his brother avoided the death penalty. David pushed hard for the government to take the death penalty off the table, insisting that his brother suffers from serious mental illness and should not be executed. “Though he has done evil things,” David Kaczynski says after the verdict is handed down, “he is not an evil person.” At least one of the victims, Yale scientist David Gelernter (see June 24, 1993), argued strongly for a death sentence. Theodore Kaczynski is believed to suffer from acute paranoid schizophrenia, and government psychiatrist Sally Johnson testified to that effect in court. “A mentally ill person is not going to be cured, to become sane, when he’s caught,” David Kaczynski says. “It will take time, if it ever occurs.… But I would hope someday he could see the enormity of what he’s done.” David Kaczynski says while many believe his brother is driven by some sort of political or social ideology (see September 19, 1995), he feels in reality his brother is driven by delusions. He says his family suspected for years that Theodore was mentally unstable: “I think there’s no question we repressed our own feelings about the severity of his illness .… There is a tendency to be in some form of denial.” (Booth 1/24/1998)

May 4, 1998: ’Unabomber’ Sentenced to Life without Parole 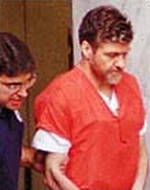 Theodore ‘Ted’ Kaczynski, convicted of charges stemming from the ‘Unabomber’ serial bombing spree, is escorted into the courtroom to hear his sentence. [Source: Associated Press]An unrepentant Theodore “Ted” Kaczynski, the so-called “Unabomber” (see April 3, 1996 and June 9, 1996), is sentenced to four life terms in prison with no possibility of release (see January 22, 1998). (Washington Post 1998) Representatives of some of his victims’ families speak out during the sentencing hearing. “Lock him so far down that when he dies he will be closer to hell,” says Susan Mosser, whose husband Thomas Mosser was killed by one of Kaczynski’s bombs (see December 10, 1994). “May your own eventual death occur as you have lived, in a solitary manner, without compassion or love,” says Lois Epstein, whose husband Charles Epstein suffered a crippling injury to his hand due to another Kaczynski bomb (see June 22, 1993). In handing down his sentence, Judge Garland Burrell Jr. says, “The defendant committed unspeakable and monstrous crimes for which he shows utterly no remorse.” Kaczynski still poses a grave danger to society and would mail his bombs again if he could, Burrell says. Kaczynski delivers a statement to the court; he expresses no remorse whatsoever for his actions, and instead accuses the government of distorting the meaning of his crimes. “Two days ago, the government filed a sentencing memorandum, the purpose of which was clearly political,” containing “false statements, misleading statements,” he says. Kaczynski is referring to excerpts from his journals which prosecutors used to portray him, not as a principled citizen out to save society and the environment from the ravages of technology, but, in the words of the Washington Post, as “a petulant, almost childish murderer who killed to extract ‘personal revenge’ on people who crossed him—from women who did not respond to his overtures to campers who wandered by his Montana cabin to planes filled with ‘a lot of businesspeople.’” Kaczynski tells the court: “By discrediting me personally, they hope to discredit my political ideas.… At a later time I expect to respond at length to the sentencing memorandum. Meanwhile, I hope the public will reserve judgment against me and all the facts about the Unabomb case until another time.” After Kaczynski speaks, Susan Mosser walks to the prosecutors’ table and speaks. “Nails,” she says. “Razor blades. Wire. Pipe and batteries. The recipe for what causes pain. Hold it in your hand, as my husband Tom did, and you feel unbearable pain.” She tells how Kaczynski’s bomb, made with wires and pipes and filled with nails, tore her husband’s torso apart, spilling his entrails over the kitchen floor. Other victims tell the court that they would have supported a death sentence. Nicklaus Suino, injured by one of Kaczynski’s bombs (see November 15, 1985), says, “I wouldn’t have shed a tear if he was executed.” David Gelernter, another man crippled by one of Kaczynski’s bombs (see June 24, 1993), says he argued for a death sentence but says that Kaczynski will live on as “a symbol of cowardice.” Kaczynski’s brother David Kaczynski speaks briefly outside the courthouse, telling reporters: “There are no words to express the sorrow of today’s proceedings. To all of these people, the Kaczynski family offers its deepest apologies. We’re very, very sorry.” (Washington Post 5/5/1998) Kaczynski will live out his sentence at the Florence, Colorado, “Supermax” federal prison, in a small cell equipped with a shower, toilet, electric lamp, concrete desk and stool, and a small television. He will have access to books from a well-stocked library, and will eat three meals a day in his cell. The Florence facility is considered the most secure prison in the nation; it is designed to house “the folks who simply cannot function in open institutions,” according to research analyst Tom Werlich. Kaczynski will not be alone at the “Supermax” facility: others such as Oklahoma City bomber Timothy McVeigh (see 8:35 a.m. - 9:02 a.m. April 19, 1995) and World Trade Center bombing mastermind Ramzi Yousef (see February 7, 1995) are in the same facility. Like the other inmates, Kaczynski will have no contact with other inmates, and for the two hours a day he spends outside his cell, he will be constantly escorted by at least two guards. (Associated Press 7/4/1998)