This page can be viewed at http://www.historycommons.org/entity.jsp?entity=david_gregory_1

David Gregory was a participant or observer in the following events:

While in Uganda for a presidential trip to various sites in Africa, White House press secretary Ari Fleischer tells two reporters that Joseph Wilson’s wife Valerie Plame Wilson is a CIA official, according to Fleischer. He also tells the two men, NBC’s David Gregory and Time’s John Dickerson, that Plame Wilson is responsible for sending her husband to Niger to investigate claims of an Iraqi attempt to buy Nigerien uranium (see February 21, 2002-March 4, 2002). Fleischer says, “If you want to know who sent Ambassador Wilson to Niger, it was his wife, she works there.” Reporter Tamara Lippert of Newsweek is present for parts of the conversation. Fleischer will recount the story as part of his testimony in the Lewis Libby perjury trial (see July 11, 2003). (Marcy Wheeler 1/29/2007) Later, Dickerson will say that Fleischer does not talk about Plame Wilson in his hearing, but merely prods him to investigate the origins of Wilson’s Niger mission (see July 11, 2003). Dickerson will write: “I have a different memory. My recollection is that during a presidential trip to Africa in July 2003, Ari and another senior administration official had given me only hints. They told me to go inquire about who sent Wilson to Niger. As far as I can remember—and I am pretty sure I would remember it—neither of them ever told me that Wilson’s wife worked at the CIA.” (Dickerson 1/29/2007) 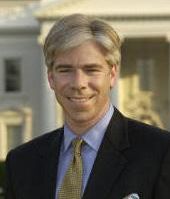 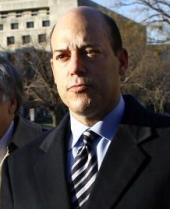 Ari Fleischer, outside the courthouse where the Libby trial is underway. [Source: Life]Former White House press secretary Ari Fleischer testifies in the trial of Lewis “Scooter” Libby (see January 16-23, 2007), and tells the court that he learned of Valerie Plame Wilson’s CIA status from Libby three days before Libby has said he first learned of it. If Fleischer is telling the truth, then Libby cannot have been truthful in his claims. Prosecutor Patrick Fitzgerald has told the court that in 2004 he offered Fleischer blanket immunity in return for his testimony (see February 13, 2004), without being sure what Fleischer would say in court. The defense team calls the arrangement highly unusual, and days before attempted to bar Fleischer’s testimony (see January 25-27, 2007). (MSNBC 2/21/2007; BBC 7/3/2007; Marcy Wheeler 1/29/2009) The prosecution quickly elicits Fleischer’s admission that if he lies under oath, his immunity agreement becomes void and he, too, can be prosecuted. (Marcy Wheeler 1/29/2009)
Libby Told Fleischer of Plame Wilson's Identity - Testifying under oath, Fleischer tells prosecuting attorney Peter Zeidenberg (handling the examination for Fitzgerald) that he learned of Plame Wilson’s identity from Libby during a lunch with him on July 7, the day after Plame Wilson’s husband’s controversial op-ed appeared in the New York Times (see July 6, 2003). Libby has told reporters he first learned about Plame Wilson’s identity on either July 10 or July 11 from NBC reporter Tim Russert (see July 10 or 11, 2003, March 5, 2004, and March 24, 2004). According to Fleischer, Libby told him: “Ambassador [Joseph] Wilson was sent by his wife. His wife works for the CIA.” Fleischer testifies that Libby referred to Wilson’s wife by her maiden name, Valerie Plame. Fleischer says, “He added it was hush-hush, on the Q.T., and that most people didn’t know it.” Fleischer also notes that Libby told him Plame Wilson worked in the Counterproliferation Division, where almost everyone is covert, though he testifies that he knows little about the CIA’s internal structure. Four days later, Fleischer heard of Plame Wilson’s CIA status again, that time from White House communications director Dan Bartlett (see July 6-10, 2003). Fleischer informed conservative columnist Robert Novak of Plame Wilson’s CIA status the same day he learned of it from Libby (see July 7, 2003), and told reporters David Gregory and John Dickerson the same information a week later in what he calls a casual conversation (see 8:00 a.m. July 11, 2003). Fleischer insists he believed the information about Plame Wilson was not classified, saying, “[N]ever in my wildest dreams [did I think] this information would be classified.” (CBS News 1/25/2007; Marcy Wheeler 1/29/2007; Goldstein and Leonnig 1/30/2007; Waas 2/19/2007; Marcy Wheeler 1/29/2009)
Defense Cross - The defense notes that Fleischer originally mispronounced Plame Wilson’s maiden name as “plah-MAY,” indicating that he may have read about her instead of being told of her identity. Fleischer says under cross-examination that he did not reveal Plame Wilson’s identity to reporters until he heard about the CIA official from a second White House aide, Bartlett (see July 7, 2003, 8:00 a.m. July 11, 2003, 1:26 p.m. July 12, 2003, and July 15, 2005). It was after Bartlett’s “vent” about Wilson that Fleischer says he decided to inform two reporters, NBC’s David Gregory and Time’s John Dickerson, of Plame Wilson’s CIA status. (Dickerson has said Fleischer did not tell him Plame Wilson was a CIA official—see February 7, 2006.) Fleischer testifies that neither Libby nor Bartlett invoked a White House protocol under which colleagues warned him when they were providing classified information that could not be discussed with reporters. (Marcy Wheeler 1/29/2007; Marcy Wheeler 1/29/2007; Goldstein and Leonnig 1/30/2007; Shane 2/4/2007)
Post: Fleischer Impugns Libby 'Memory Defense' - The Washington Post calls Fleischer “the most important prosecution witness to date,” and continues: “Though a series of government officials have told the jury that Libby eagerly sought information about [Wilson], Fleischer was the first witness to say Libby then passed on what he learned: that Wilson’s wife was a CIA officer who had sent him on a trip to Africa.… Fleischer also reinforced the prosecution’s central argument: that Libby had been so determined to learn and spread information about Wilson and Plame that he could not have forgotten his efforts” (see January 31, 2006). (Goldstein and Leonnig 1/30/2007) In 2004, Libby testified that he could not remember if he discussed Plame Wilson with Fleischer, though he admitted that he may have. (US Department of Justice 3/5/2004

March 1, 2009: Defense Secretary: Iran Not Close to Having Nuclear Weapon

Defense Secretary Robert Gates says that Iran is not close to having a nuclear weapon, which gives the US and other nations time to persuade Tehran to abandon its suspected nuclear weapons program. Gates tells NBC’s David Gregory, “They’re not close to a stockpile, they’re not close to a weapon at this point, and so there is some time.” Gates’s statement contradicts a recent warning from Admiral Michael Mullen, the head of the Joint Chiefs of Staff, who told a CNN audience that he believes Iran has enough fissile material to build a nuclear bomb (see March 1, 2009). Tehran insists that its nuclear program is strictly about producing electricity for peaceful purposes. Gates says there is “a continuing focus on how do you get the Iranians to walk away from a nuclear weapons program” in the Obama administration, just as had been in the Bush administration. Obama officials have called Tehran’s nuclear development program an “urgent problem,” and have said they favor a balance between economic sanctions and incentives for engagement. (Zabarenko 3/1/2009)

Jordan’s King Abdullah, during an interview on NBC, says the US indeed tortured prisoners during the last administration. “Well, from what we’ve seen and what we’ve heard, there are enough accounts to show that this is the case,” Abdullah says. Interviewer David Gregory says: “That’s an important point. You actually do believe that the United States engaged in torture.” Abdullah responds, “What I see on the press… shows that there were illegal ways of dealing with detainees.” (Shakir 4/25/2009)

August 16-17, 2009: House Speaker: Idea that US Citizens Would be Forced into Government-Run Health Care ‘a Myth’

The Office of the Speaker of the House, Nancy Pelosi (D-CA), releases a fact sheet contradicting what it calls “a myth opponents of health insurance reform have been spreading: that people would be ‘forced’ to choose a public health insurance option, and falsely attributes it to the Congressional Budget Office (CBO).” The claim has circulated throughout the media, Pelosi’s office notes, and says, “In fact, the public option in America’s Affordable Health Choices Act simply provides those using the Health Insurance Exchange a choice between various private plans and a public plan—with the choice being made by the individual, never an employer.” The fact sheet notes four instances of the claim being made on August 16 alone:

Representative Tom Price (R-GA) tells an Associated Press reporter that the Democrats’ reform bill would force citizens to abandon their private health care plans in favor of a government-run plan, and says the CBO supports his claim.

ABC reporter Jake Tapper, on ABC’s This Week with George Stephanopoulos, asks, “How can the administration make the promise that if you like your insurance plan you can keep it, when CBO and other analysts estimate that some people will be switched from private to public?”

Fox News anchor Chris Wallace, on Fox News Sunday, tells his listeners of “a study by the nonpartisan Congressional Budget Office which found that by 2016, 9 million people will no longer have their employer-based plan under health care reform because businesses would decide in many cases that it’s cheaper simply to pay the penalty and push people into a public plan.”

David Gregory, the anchor of NBC’s flagship Sunday talk show Meet the Press, asks, “Does he [President Obama] undermine his credibility when he makes some claims like, if you like your insurance you can keep your insurance, when a lot of people have said not really; employers could drop people from insurance if they wanted to move people into a public plan, if that existed?”
Pelosi’s office states that, unlike the claims and questions advanced by Price, Tapper, Wallace, and Gregory, the CBO has noted that under all versions of reform legislation, US citizens would retain the choice of whether to keep their existing insurance or join the “public option” government program. (Speaker of the House 8/17/2009)