This page can be viewed at http://www.historycommons.org/entity.jsp?entity=david_lockett_1

David Lockett was a participant or observer in the following events: 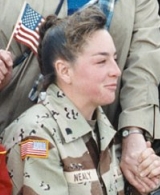 Melissa Rathbun-Nealy at a rally in her home town of Grand Rapids, Michigan. [Source: Grand Rapids Public Library]During the fighting in and around Kharfji (see January 29-30, 1991), Iraqi forces capture the first US female prisoner of war. (American Forces Press Service 8/8/2000) The POW is later identified as Army Specialist Melissa Rathbun-Nealy, a driver with the 233rd Transportation Company. She and fellow driver Specialist David Lockett became lost and stuck in the sand while driving a heavy flatbed truck near the Iraq-Kuwait border; both are captured. (People 2/18/1991) Both Rathbun-Nealy and Lockett will be released in March 1991, along with four other POWs. Interestingly, both soldiers are initially listed as “missing in action” instead of “prisoners of war”; the Defense Department will give no explanation for the decision to list them as MIA, though some believe it is to escape potential media embarrassment at having a female soldier captured by the enemy. Both Rathbun-Nealy and Lockett will report that their captivity was largely uneventful, and they were well treated. (POW Network 11/8/2007)