This page can be viewed at http://www.historycommons.org/entity.jsp?entity=dc_fire_and_emergency_department_1

District of Columbia Fire and Emergency Medical Services Department (DCFD) was a participant or observer in the following events:

(9:46 a.m.) September 11, 2001: Firefighters Are Dispatched after the Secret Service Incorrectly Reports that a Plane Has Hit the White House

Engine Company 16. [Source: District of Columbia Fire and Emergency Medical Services Department]The District of Columbia Fire Department (DCFD) sends engines to the White House after the Secret Service incorrectly reports that a plane has crashed into the presidential residence and the building is on fire. As well as reporting the supposed plane crash and fire, the Secret Service says the White House, or at least part of it (the specific details are unclear), has collapsed. In response to the report, the fire communications center dispatches a “box alarm” from Engine Company 16, the station that serves the White House. (Witt 9/21/2001; Ward 4/2002

) Since the alleged incident is at the White House—the home of the US president—the response is increased by sending an additional battalion chief and the deputy fire chief, Rogers Massey, to deal with it. And because a building collapse has been reported, the DCFD’s cave-in task force, which comprises Rescue 3, Battalion Chief 3, Engine 15, and the hazmat (hazardous materials) task force, is also sent. However, when the crews arrive at the White House, they are promptly told to leave. A uniformed Secret Service officer waves them away and says: “Get the f_ck outta here! There’s a plane coming in!” Lieutenant Jeff Wright, one of the firefighters involved in the response, will later recall the turn of events, saying: “It was mass confusion. We go down to the White House and no one knows what’s going on. We could see smoke coming from Virginia [where the Pentagon is located].” The report of the incident at the White House is investigated and determined to be unfounded. However, after he receives intelligence reports from the FBI, Special Operations Battalion Chief Michael Sellitto decides he will keep his units near the White House in case attacks should subsequently occur there or at the Capitol building. (Witt 9/21/2001; Ward 4/2002

A fire erupts in Vice President Dick Cheney’s ceremonial offices in the Eisenhower Executive Office Building while White House press secretary Dana Perino is answering questions about the destruction of CIA interrogation videos, at approximately 9:15 in the morning, next door at the White House. White House spokesperson Emily Lawrimore says she is unaware of any documents or artwork lost in the fire. DC fire department spokesman Alan Etter says that smoke came from an electrical closet on the second floor, which may have been the location of the fire’s cause. Perino says the fire may have originated in the electrical closet or a phone bank. The vice president’s working office is located in the West Wing of the White House, whereas the Eisenhower Executive Office Building houses the Office of Management and Budget, staff of the National Security Council, other agencies, and the ceremonial offices of the vice president. The adjacent office of the vice president’s political director Amy Whitelaw is heavily damaged in the fire, according to Cheney spokesperson Lea Anne McBride. (Knoller 12/19/2007; Hunt 12/19/2007; Gerstenzang 12/20/2007) 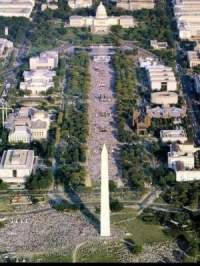 This 1997 photograph was circulated as ‘proof’ that the September 12, 2009 rally had millions in attendance. [Source: St. Petersburg Times]Conservative bloggers attempting to give credence to discredited claims that the “9/12 rally” held in Washington attracted up to two million participants (see September 12, 2009) circulate a photo which they say proves the size of the crowd. The photo shows a crowd packing the National Mall and spilling into the streets beyond. Unfortunately, the photo is quickly shown to have been taken at least five years before the rally took place. The St. Petersburg Times asks Pete Piringer, public affairs officer for the DC Fire and Emergency Department, if the rally had been big enough to fill that area. Piringer says it had not, and notes that the photo being circulated could not have been taken in 2009. He says the crowd “only filled the Capitol grounds, maybe up to Third Street.” Moreover, the photo does not include the National Museum of the American Indian, a building located at the corner of Fourth Street and Independence Avenue that opened on September 14, 2004. The museum should be in the upper right corner of the National Mall, next to the Air and Space Museum. The Times says the photo was likely taken in 1997. A Democratic media strategist says of the false photo: “I’ve seen bigger crowds at Montreal Expos games, but I still wouldn’t fake a photo just to justify your predictions of millions descending on Washington. This is grade-A stupid and just plays into the argument that these were astroturf protests to begin with. They’ve always brought the noise, but the question that was supposed to be answered this weekend was, could they bring the numbers? In that respect this was an unmitigated disaster.” By September 14, many of the conservative blogs that had originally posted the photo have taken them down, though some are claiming that the picture is a result of a liberal conspiracy to discredit the event. Many conservatives still argue that over a million people attended the rally. (Huffington Post 9/14/2009; Richart 9/14/2009)