This page can be viewed at http://www.historycommons.org/entity.jsp?entity=devi_sharan_1

Devi Sharan was a participant or observer in the following events: 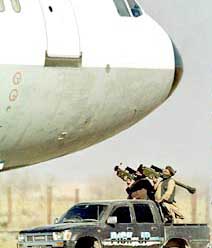 Hijackers threaten the Indian Airlines plane, under Taliban supervision. [Source: Agence France-Presse/ Getty Images]Indian Airlines Flight 814 is hijacked and flown to Afghanistan where 155 passengers are held hostage for eight days. They are freed in return for the release of three militants held in Indian prisons. One of the hostages is killed. One of the men freed in the exchange is Saeed Sheikh, who will later allegedly wire money to the 9/11 hijackers (see Early August 2001). (BBC 12/31/1999) Another freed militant is Maulana Masood Azhar. Azhar emerges in Pakistan a few days later, and tells a crowd of 10,000, “I have come here because this is my duty to tell you that Muslims should not rest in peace until we have destroyed America and India.” (Hussain 1/5/2000) He then tours Pakistan for weeks under the protection of the ISI, Pakistan’s intelligence agency. (Anson 8/2002) The ISI and Saeed help Azhar form a new Islamic militant group called Jaish-e-Mohammed, and Azhar is soon plotting attacks again. (Pittsburgh Tribune-Review 3/3/2002; McCarthy 7/16/2002; Lancaster and Khan 2/8/2003) The hijacking plot is blamed on Harkat ul-Mujahedeen (also known as Harkat ul-Ansar), a Pakistani militant group originally formed and developed in large part due to Pervez Musharraf in the early 1990s, and led by Azhar and Sheikh before their arrests in India (see Early 1993). Musharraf has just taken power in Pakistan in a coup two months earlier (see October 12, 1999). The Indian government publicly blames the ISI for backing the hijacking. Such claims are not surprising given the longstanding animosity between Pakistan and India; however, US officials also privately say the ISI backed the hijacking and may even have helped carry it out. The US and Britain demand that Pakistan ban Harkat ul-Mujahedeen and other similar groups, but Pakistan takes no action. (Rashid 2008, pp. 48) The five hijackers, all Pakistanis and members of Harkat ul-Mujahedeen, are released and return to Pakistan. They are never arrested. One of them will later be revealed to be Amjad Farooqi, a leader of both al-Qaeda and Pakistani militant groups who will be killed in mysterious circumstances in 2004 (see September 27, 2004). India is furious with the US for refusing to condemn Pakistan or pressure it to take action against the hijackers. According to some sources, al-Qaeda planned the hijacking in conjunction with Harkat ul-Mujahedeen. (Khan 9/27/2004; Rashid 2008, pp. 112-113) In 2001, the flight’s captain, Devi Sharan, will say that the hijackers of his plane used techniques similar to the 9/11 hijackers, suggesting a common modus operandi. The hijackers praised Osama bin Laden, had knives and slit the throat of a passenger, herded the passengers to the back of the plane where some of them used cell phones to call relatives, and one hijacker said he had trained on a simulator. (CNN 9/26/2001)