This page can be viewed at http://www.historycommons.org/entity.jsp?entity=diversetea_1

DiverseTea was a participant or observer in the following events: 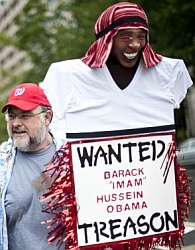 A sign displayed at a tea party protest depicting President Obama as a Muslim and a traitor. [Source: Mother Jones]Tea party founders Dick Armey and Matt Kibbe of the lobbying organization FreedomWorks (see February 16-17, 2009, February 19, 2009 and After, February 27, 2009, March 2, 2009, March 13, 2009 and After, April 14, 2009, and April 15, 2009) announce the creation of DiverseTea, a project designed to encourage non-whites to become tea party members. Kibbe says DiverseTea will highlight “African Americans, Jews, Hispanics, others that have come to this movement, because there is this nagging perception that we are not diverse.” The Web site DiverseTea invites tea partiers to identify themselves as minorities. As of late September, 13 people have self-identified themselves as “minority” tea partiers, including one who identifies himself as “Welsh.” Dana Milbank of the Washington Post writes that even with its vanishingly small numbers, DiverseTea’s “launch is an acknowledgment that movement leaders are sensitive to the impression that the tea party is largely a coalition of angry, white, Protestant men.” Since its inception, accusations of racism have flown at various tea party members and organizations, a perception that Kibbe and Armey are eager to disperse. However, Armey attacks African-American and Latino communities for taking “reprisals” against minority members who join tea party groups, saying, “The difficulties, the harassment, the intolerance, the abuse that they suffer comes from… your own community, your own relatives, your own family.” But, as Armey informs a Pakistani-American who asks about the tea party’s “xenophobic” attitude towards Muslims, “It’s the most inclusive group of people I know.” (Quraishi 9/2010; Milbank 9/15/2010)