This page can be viewed at http://www.historycommons.org/entity.jsp?entity=don_jeror_1

Don Jeror was a participant or observer in the following events: 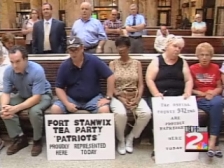 Local ‘tea party’ protesters at the Arcuri/Hoyer town hall. [Source: WKTV]Democratic Majority Leader Steny Hoyer (D-MD), taking part in a town hall meeting in upstate New York hosted by House member Michael Arcuri (D-NY), is browbeaten and verbally assaulted by conservative protesters who are against health care reform. The meeting is to discuss a proposal for a high-speed rail system for the area. “You’re lying to me!” one protester, local conservative activist Don Jeror, screams during the assemblage. “Just because I don’t have sophisticated language, I can recognize a liar when I see one!” Jeror adds, “Why would you guys try to stuff a health care bill down our throats in three to four weeks, when the president took six months to pick a dog for his kids?!” Jeror and many of the activists, who continue to scream and shout over Hoyer during his entire presentation, belong to a group called the “Fort Stanwix Tea Party ‘Patriots.’” House Member Lloyd Doggett (D-TX), who was recently accosted by conservative protesters during a town hall meeting in his district (see August 1, 2009), says the protests are anything but spontaneous and citizen-driven. “This notion of a grass-roots campaign is totally and completely phony,” he says. “The Republican Party has coordinated this apparent outrage and stirred it up.” While he and fellow Democrats welcome dialogue, he says, “there’s no way you can change the legislation to satisfy any of these Republicans and their insurance allies.” Doggett is referring to allegations that corporate lobbying groups such as Americans for Prosperity and FreedomWorks (see April 14, 2009, April 15, 2009, May 29, 2009, August 4, 2009, August 5, 2009, and Before August 6, 2009) are behind the protests. White House press secretary Robert Gibbs agrees, saying, “I think what you’ve seen is they have bragged about manufacturing, to some degree, that anger.” Bob MacGuffie, a Connecticut conservative activists who recently wrote a strategy memo directing fellow conservatives in methods to disrupt and dominate town hall meetings (see Late July, 2009), says that while there is organization, the anger and resistance to reform is “most assuredly real.… We’re organizing those voices, but it’s a real emotion, coast to coast.” ABC News reports that polls show the “protesters are not representative of the public at large, which overwhelmingly supports provisions such as ‘requiring insurance companies to sell health coverage to people, even if they have pre-existing medical conditions’ and ‘requiring that all Americans have health insurance, with the government providing financial help for those who can’t afford it.’” (Tapper 8/4/2009; Kleefeld 8/4/2009; WKTV 8/4/2009)