This page can be viewed at http://www.historycommons.org/entity.jsp?entity=donald_minniecheske_1

Donald Minniecheske was a participant or observer in the following events: 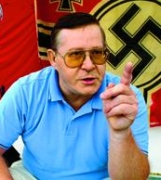 James Wickstrom. [Source: Southern Poverty Law Center]James Wickstrom, a tool salesman and former mill worker angered by what he saw as less-qualified African-American workers bypassing him in receiving raises and promotions, meets Thomas Stockheimer (see 1974), a member of the violent anti-tax, racist, and anti-Semitic organization Posse Comitatus (see 1969). Wickstrom walks by Stockheimer’s “Little People’s Tax Party” office in Racine, Wisconsin, each week, and is accosted by Stockheimer, who asks him: “Do you know who you are? Do you really know who you are? Do you know that you’re an Israelite?” Initially Wickstrom is offended at being called, he believes, a Jew, but after a discussion, leaves with two audiotapes of sermons by Posse founder William Potter Gale that tell him he is a member of God’s chosen people, a member of the “true” Israelite tribe; Jews are the offspring of Satan and are unworthy of being called Israelites. Blacks, Gale preaches, are subhuman, no better than beasts of the field, and merely tools of the Jewish conspiracy to destroy white Western society. Wickstrom finds Gale’s message appealing, and he joins Stockheimer in setting up a Bible study group. Wickstrom follows in Gale’s footsteps and becomes an adherent of the Christian Identity ideology (see 1960s and After). Stockheimer flees Racine ahead of the police, who intend to have him complete his jail sentence for assaulting an IRS agent, and Wickstrom quits his job and moves to Schell City, Missouri; he will later explain the move, saying, “I wanted to be with like-minded people.” He buys property near Identity minister Dan Gayman, becomes a teacher at a small private school operated by Gayman and another Identity minister, Loren Kallstrom, and in 1977 founds his own church, Mission of Jesus the Christ Church, living off tithes and donations. After a falling out with Gayman, in 1978 Wickstrom moves back to Wisconsin, at the invitation of Posse member Donald Minniecheske, who wants him to take part in the establishment of a Posse compound on the shores of the Embarrass River (see 1978 - 1983). (Southern Poverty Law Center 12/2004)

James Wickstrom (see 1975 - 1978), a self-styled “minister” of the racist, anti-Semitic Christian Identity ideology (see 1960s and After) and a member of the anti-government Posse Comitatus (see 1969), moves back to his childhood state of Wisconsin from his home in Missouri, at the invitation of Donald Minniecheske, who owns 570 acres of land on the shores of the Embarrass River and wants to create a “township” for the Posse that would be run without recognition of federal, state, or local law. Minniecheske wants Wickstrom to be part of the new “township” and what Minniecheske calls the “rejuvenation” of the Posse. He begins by naming himself “national director of counter insurgency” of the organization. After building a bar and moving a few trailers onto the land, Wickstrom and Minniecheske name the property the Constitutional Township of Tigerton Dells. Wickstrom names himself the township’s judge and municipal clerk, and grants Minniecheske a new liquor license (he had lost his previous license two years before). Wickstrom also begins traveling through the Midwestern farm belt, appearing at meeting halls, in basements, and at farm shows. “I knew that something had to be done. I knew that the ranchers and the farmers were being meticulously destroyed by the Jew banking system in America,” Wickstrom will later say. Wickstrom preaches the gospel of anti-tax protest and refusal to pay income taxes (see 1951-1967). He tells his listeners that since taxation and the federal government are both illegitimate, and since they are “sovereign citizens” of the US, they can pay their tax debts with fictitious money orders. Driver’s licenses and ZIP codes are equally illegitimate, Wickstrom says, and tells his listeners they are the victims of a widespread Jewish conspiracy that works through tax collectors, law enforcement officials, judges, and the like to oppress them. Jews and tax collectors should be lynched, Wickstrom advises. Dairy farmer Floyd Cochran will later recall listening to Wickstrom, saying: “In the ‘70s and ‘80s farming went through a drastic change. A lot of people I’d known a good part of my life went out of business. Wickstrom was organizing farmers out West, appearing at farm shows and things of that nature, telling farmers you are losing your place not because of something you did but because the Jews want to take away your farms.” By 1980, Tigerton Dells becomes the center of Posse-led paramilitary training; Wickstrom will later claim that Posse seminars draw thousands of participants who are taught survival skills and covert military operations by high-ranking Vietnam veterans. That same year, Wickstrom runs for the US Senate on the far-right Constitution Party ticket. In 1982, a local radio station begins broadcasting his speeches, and he runs for governor of Wisconsin. He continues preaching, and tells his listeners, falsely, that “his” Posse has over two million members. When North Dakota Posse member Gordon Kahl kills two US Marshals and flees (see February 13, 1983 and After), Wickstrom uses the incident to vault to national prominence and establish himself as a Posse leader (see February 14-21, 1983), moderating his usual virulently racist rhetoric, emphasizing his patriotism and strong Christian beliefs, and presenting himself as a champion of ordinary farmers and working people. (Southern Poverty Law Center 12/2004)