This page can be viewed at http://www.historycommons.org/entity.jsp?entity=dzhokhar_dudayev_1

Dzhokhar Dudayev was a participant or observer in the following events: 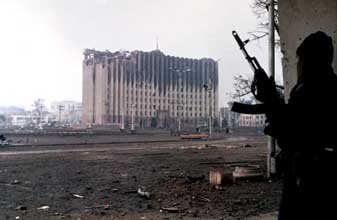 A Chechen rebel looks at the government palace in Grozny, Chechnya, in January 1995. [Source: Mikhail Evstafiev]In 1991, with the collapse of the Soviet Union, Dzhokhar Dudayev won an election in Chechnya, which is a region within Russia and not a republic like Ukraine or Kazakhstan. Nonetheless, Dudayev proclaimed Chechnya independent of Russia. The next year, Chechyna adopted a constitution defining it as an independent, secular state. But Russia did not recognize Chechnya’s independence. In November 1994, Russia attempted to stage a coup in Chechnya, but this effort failed. The next month, on December 11, Russian troops invade Chechnya. This starts the first Chechen war. Up to 100,000 people are killed in the 20-month war that follows. The war will end in August 1996 (see August 1996). (BBC 3/16/2000; BBC 3/12/2008)

In August 1996, fighting between Russian forces and Chechen separatists increases as Chechen rebels launch a successful attack on Grozny, which is by far the largest town in Chechnya. Chechen president Dzhokhar Dudayev had been killed in a Russian missile attack in April 1996, after which he was succeeded by Zemlikhan Yandarbiyev. Shortly after the attack on Grozny, Russian and Chechen leaders agree to a ceasefire. A further agreement on Russian troop withdrawals will be signed in November. In January 1997, Aslan Maskhadov wins presidential elections in Chechnya, and Russia recognizes his government. A formal peace treaty will be signed that May. However, the issue of independence for Chechnya will remain unresolved. (BBC 3/12/2008) Islamist influence in the first Chechen war is minimal, and the number of foreign militants fighting in the war is small. Dudayev is said to be afraid of accepting money from terrorist sources out of fear this would demonize the rebel movement. But after Dudayev’s death and the end of the war, the Islamists will grow in power in Chechnya. (LaFraniere 4/26/2003)