This page can be viewed at http://www.historycommons.org/entity.jsp?entity=ed_freni_1

Ed Freni was a participant or observer in the following events:

At Boston’s Logan Airport, from which Flight 11 and Flight 175 took off, directors learn that a plane thought to be from there has hit the World Trade Center, and another from there is missing. John Duval, the airport’s deputy director of operations, is at his desk in the executive aviation office, when his son calls and informs him of the first plane hitting the WTC. A duty manager then calls, saying he has been on the phone with the FAA control tower at the airport. The manager tells Duval he has been informed that, as well as the plane that hit the WTC, “Another one is missing,” and, “They think the two planes came from here.” Duval immediately calls Ed Freni, who is Logan’s director of aviation operations. Duval passes on the news of the WTC crash and the other information from his duty manager. The two men arrange to meet in five minutes time at the Massachusetts Port Authority (Massport) aviation office on the 18th floor of the FAA control tower at the airport. (Murphy 2006, pp. 30-33) 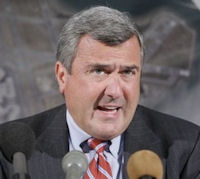 Ed Freni. [Source: Associated Press]As he learns of the two plane crashes in New York, a director at Boston’s Logan Airport—from where the two crashed aircraft took off—contacts the airlines to request the passenger manifests for these flights. At around 9:00 a.m., Ed Freni, who is Logan’s director of aviation operations, has just been informed that a plane—believed to be from his airport—has hit the World Trade Center, and another plane from the airport is missing (see (8:50 a.m.-9:00 a.m.) September 11, 2001). He calls the American Airlines station in Logan’s Terminal B. A friend of his there tells him they are concerned about American Airlines Flight 11. The friend says Amy Sweeney, one of its flight attendants, called from the air (see 8:22 a.m.-8:24 a.m. September 11, 2001), said they were flying low over Manhattan, and then her line went dead (see (8:44 a.m.) September 11, 2001). Freni asks to be faxed a copy of the manifest for Flight 11. The manifest holds the names of passengers on an aircraft by seat number. If there is an accident, it allows officials to begin contacting next of kin. At 9:05, he arrives at the Massachusetts Port Authority (Massport) aviation office on the 18th floor of the FAA control tower at Logan, where he has arranged to meet John Duval, the airport’s deputy director of operations. Freni sees on television the footage of the South Tower being hit just two minutes earlier. He calls his contacts at various airlines at Logan and learns that United Airlines is concerned about its Flight 175. He asks United to fax him the manifest for this plane. According to author Tom Murphy, Freni will receive the manifests for Flight 11 and Flight 175 at 9:30 a.m. (see 9:30 a.m. September 11, 2001). Meanwhile, Duval is talking with FAA officials further up in the control tower. They tell him: “United 175 came from here. We lost contact at 8:43.” (Murphy 2006, pp. 33-35)

A director at Boston’s Logan Airport receives the passenger manifests for Flight 11 and Flight 175, and reportedly is able to quickly single out the names of the five hijackers on each of these flights. Ed Freni, the director of aviation operations at Logan, had phoned his contacts at American and United Airlines who are based at the airport roughly around 9:00-9:15. He had requested the manifests for the two hijacked planes that took off from there (see (9:00 a.m.-9:15 a.m.) September 11, 2001). Several pages with names listed in long columns now roll out of the fax machine in the Massachusetts Port Authority (Massport) aviation office at Logan, where Freni recently arrived. Freni looks over the manifest for Flight 11. Aware that Arab men attacked the World Trade Center in 1993, he searches for any Arabic names. According to author Tom Murphy, he circles the names of the five men later accused of being the plane’s hijackers: “In 2A and 2B, he circled two, both W. Alshehri. In 8D, M. Atta, and 8G, A. Alomari. In 10B, he circled S. Al Suqami.” None of the names of the other individuals on the plane appear suspicious to him. Freni then looks over the manifest for Flight 175. Again, according to Murphy, he singles out the names of the men later accused of being the plane’s hijackers: “He circled F. Alquadibanihammad [presumably Fayez Ahmed Banihammad], A. Alghamdi, H. Alghamdi, M. Alshehri, and M. Alshehhi.” Freni asks John Duval, Logan’s deputy director of operations who is with him in the aviation office, “FBI here yet?” Duval replies, “They’re on the way over from downtown.” Freni says, “Tell ‘em we got their guys.” (Murphy 2006, pp. 34-36) However, at 10:59 a.m., the FBI’s Chicago command post will receive a copy of the manifest for Flight 175, and, according to an FBI document, this will have six Muslim names on it—one more than Freni reportedly singles out. (Federal Bureau of Investigation 9/12/2001

) Presumably the sixth Muslim name is that of Touri Bolourchi, a nurse originally from Iran. (Donovan et al. 6/30/2002) There were also at least another two passengers on Flight 11 with names that might appear to be Arabic, yet that Freni apparently does not single out: Waleed Iskandar was a Lebanese management consultant. (Kazak 12/12/2001; Bryson 9/11/2002) And Rahma Salie was an IT consultant of Sri Lankan descent. (Usborne 10/11/2001; Depalma et al. 7/14/2002)