This page can be viewed at http://www.historycommons.org/entity.jsp?entity=ed_mcwilliams

Positions that Ed McWilliams has held:

Ed McWilliams was a participant or observer in the following events: 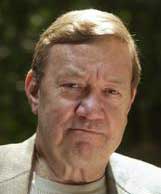 Milton Bearden. [Source: Publicity photo]State Department Special Envoy Ed McWilliams, stationed in Islamabad, sends a widely distributed cable to Washington warning that continued support for the Islamist militants will have disastrous consequences. This leads to a long and bitter debate between those who agree with McWilliams, and those, including CIA Station Chief Milton Bearden, who believe that the manipulation of the Islamists has been a huge success that can and should be continued and replicated elsewhere. In response to the warning, the embassy investigates McWilliams, searching for weaknesses such as alcoholism and homosexuality. (Coll 2004, pp. 184) Additionally, the CIA “raises serious questions about his handling of classified materials.” (Coll 2004, pp. 176-204)