This page can be viewed at http://www.historycommons.org/entity.jsp?entity=ehud_olmert_1

Ehud Olmert was a participant or observer in the following events: 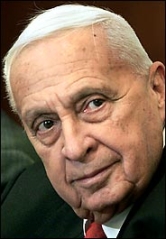 Ariel Sharon, shortly before suffering a stroke. [Source: New York Times]Christian broadcaster Pat Robertson says that a recent stroke suffered by Israeli Prime Minister Ariel Sharon is divine punishment for “dividing God’s land.” (Associated Press 1/5/2006) Sharon is in a deep coma after suffering what doctors say is a severe stroke. Sharon, in critical condition, is assumed to be unable to return to public life. His deputy, Ehud Olmert, is named acting prime minister. (Erlanger 1/5/2006) On his television program, The 700 Club, Robertson says: “God considers this land to be his. You read the Bible and he says ‘This is my land,’ and for any prime minister of Israel who decides he is going to carve it up and give it away, God says, ‘No, this is mine.’” Sharon ordered Israel to withdraw from the Gaza Strip in 2005. Robertson adds that Sharon is “a very tender-hearted man and a good friend” and he is saddened to know that Sharon is so debilitated. However, he says the Bible “makes it very clear that God has enmity against those who ‘divide my land.’” Sharon “was dividing God’s land and I would say woe unto any prime minister of Israel who takes a similar course to appease the EU (European Union), the United Nations, or the United States of America.” Robertson implies that God also struck down former Prime Minister Yitzhak Rabin, who was assassinated after working to give land to the Palestinian people (see November 4, 1995). “It was a terrible thing that happened, but nevertheless he was dead,” Robertson says. The Anti-Defamation League, a Jewish organization, issues a statement urging Christian leaders to distance themselves from the remarks. “It is outrageous and shocking, but not surprising, that Pat Robertson once again has suggested that God will punish Israel’s leaders for any decision to give up land to the Palestinians,” says ADL director Abraham Foxman. “His remarks are un-Christian and a perversion of religion. Unlike Robertson, we don’t see God as cruel and vengeful.” Reverend Barry Lynn of Americans United for Separation of Church and State says a religious leader “should not be making callous political points while a man is struggling for his life. Pat Robertson has a political agenda for the entire world, and he seems to think God is ready to take out any world leader who stands in the way of that agenda.” (Associated Press 1/5/2006) “Those comments are wholly inappropriate and offensive and really don’t have a place in this or any other debate,” says White House spokesman Trent Duffy. Senate Minority Leader Harry Reid (D-NV) calls Robertson’s statement “completely outrageous, insulting, and inappropriate.” Sharon “is fighting for his life,” Reid says. “He and his family deserve our thoughts and prayers, and I hope Mr. Robertson will offer them after he apologizes.” (MSNBC 1/6/2006)

The US intelligence community begins plumbing the data they have compiled on Iran’s nuclear weapons program in an attempt to shore up the Bush administration’s premature conclusion that Iran is on the verge of producing a nuclear weapon. Instead, their conclusions are that Iran shut down its nuclear weapons program in 2003. In the process, White House aides begin a program of “deep dives,” or special briefings for President Bush to meet with not only his advisers but the actual analysts who study Iranian intelligence data, in an attempt to allow Bush to “get his hands dirty” with real intelligence and not just pre-digested summaries. Bush is dismayed at the lack of solid intelligence on Iran’s nuclear program and asks for more. When the intelligence community does provide more, it finds more and more evidence that Iran had shut down its nuclear weapons program years before. Those conclusions will be released in a National Intelligence Estimate (NIE) a year later (see December 3, 2007).
Troubling Conclusions, White House Spin - Bush and his top officials don’t like the findings; if true, the reports disprove the entirety of the administration’s push to define Iran as an imminent threat to the Middle East. White House officials are initially skeptical, believing that the intelligence community might be a victim of Iranian disinformation. The intelligence agencies create a special “red team” of analysts to thoroughly test and, if possible, discredit the information. They are unable to do so. “They tried to figure out what exactly it would take to perpetrate that kind of deception, how many people would be involved, how they would go about doing it, when it would have been set up and so forth,” says one intelligence official. Analysts “scrubbed and rescrubbed” more than 1,000 pieces of evidence but conclude Iran’s program really had been shut down. Faced with that conclusion, the White House decides to focus on the findings that confirm their suspicions—that Iran did have a secret weapons program that could be restarted again. No one in the White House suggests that Bush tone down his rhetoric or change his policies towards Iran. Director of National Intelligence Mike McConnell decides to keep the new findings secret, the same position adopted by Vice President Cheney (see October 2006 and November 10, 2007). Only the Israelis are told of the new findings; Congress, the US’s European allies, and the UN’s monitoring agency, the International Atomic Energy Agency (IAEA) are told nothing. McConnell will reluctantly change his mind out of a fear of leaks and possible charges of a coverup. That decision may come back to haunt the administration, particularly with the ill-will it will create among the US’s allies. Former State Department nonproliferation official Robert Einhorn says, “The administration is going to pay a price for not allowing allies in on it at an earlier date. The French had carried the administration’s water on this issue and really went out on a limb to get the European Union to adopt tough sanctions. And now the rug has been pulled out from under them.”
New NIE Draft Sparks Controversy - An NIE the year before (see August 2, 2005) had led the US to conclude that Iran was actively working on a nuclear weapons program. Congressional Democrats, not entirely convinced by the NIE’s conclusions and increasingly resistant to Bush’s push for confrontation with Iran, asks for a new NIE. Bush wants the new NIE to confirm his accusations and, in one official’s words, “get more information on Iran so we know what they’re up to.” The 2005 NIE had been based largely on information about Iran’s “Project 1-11,” a program that Iran is apparently pursuing to retrofit a ballistic missile to carry nuclear warheads (see Summer 2004). But no new information on Project 1-11 has been secured in three years, and the administration insists on new confirmations. “They just wouldn’t budge,” one agency official recalls. A new draft is completed in June, provoking heated discussions among agency and administration officials. CIA director Michael Hayden and NSA director Keith Alexander begin directing their agencies to closely monitor Iranians who were involved in their country’s nuclear program. Soon, communications intercepts from key Iranian officials indicate that the program had been mothballed in 2003. Some of the officials discuss their belief that the program may never be restarted.
Evolving NIE - As the draft NIE evolves, McConnell, with the assistance of his deputies Thomas Fingar and Donald Kerr, both national security veterans, lay down ground rules. One official later says that McConnell “quickly got the mantra down: ‘We must make a clear distinction between what we know and don’t know and what we judge to be the case.’” The internal debate over the NIE is sharp and often contentious. McConnell will finally inform Bush of the new conclusions—that Iran stopped its nuclear weapons program in 2003—in August (see December 5, 2007 and December 3-4, 2007). In September, House and Senate intelligence committee members are informed as well. A September draft radically differs from the June version, based in large part on the communications intercepts and the exhaustive analysis on the data possessed by the CIA and NIE. The chief analysts are grilled by Hayden and his deputy Stephen Kappes, but the analyses stand up. Cheney, National Security Adviser Stephen Hadley, and other key officials will be given a preliminary briefing on the new NIE on November 15; Bush, finalizing a Middle East peace conference in which he will try to rally Middle Eastern countries against Iran, is not officially told of the new NIE until November 28. Bush immediately tells Israeli Prime Minister Ehud Olmert (see November 26-28, 2007), and Cheney appraises Israeli Foreign Minister Ehud Barak. Discussions about whether or not to keep the NIE secret lead to McConnell’s decision to make a declassified version public. A top intelligence official says, “We knew it would leak, so honesty required that we get this out ahead, to prevent it from appearing to be cherry picking.” (Baker and Linzer 12/8/2007)

June 19, 2007: Bush Warns of ‘Consequences’ to Iran if It Continues Working on Nukes 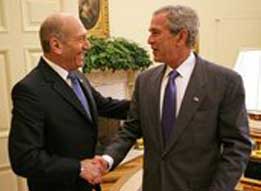 George W. Bush and Ehud Olmert. [Source: White House]During a press briefing with visiting Israeli Prime Minister Ehud Olmert, President Bush accuses Iran of actively developing nuclear weapons, and warns of the ramifications of that activity. He warns of the “consequences to the Iranian government if they continue to pursue a nuclear weapon, such as financial sanctions, or economic sanctions.… Now, whether or not they abandon their nuclear weapons program, we’ll see.” (White House 6/19/2007)

According to national security director Stephen Hadley (see December 3, 2007) and President Bush himself (see December 3-4, 2007), Bush will not be informed about the findings of a National Intelligence Estimate (NIE) showing that Iran stopped work on its nuclear program until November 28. But that may be false. On December 4, journalist Seymour Hersh will tell a CNN reporter, “Israel objects to this report. I’m told that [Prime Minister Ehud] Olmert had a private discussion with Bush about it during Annapolis—before Annapolis [where Israel and the US engaged in preliminary peace talks over the Israeli-Palestinian conflict]. Bush briefed him about it. The Israelis were very upset about the report. They think we’re naive, they don’t think we get it right. And so they have a different point of view.” If Hersh is correct, then Bush discussed the NIE’s findings with Israel’s Olmert on November 26, two days before he supposedly learns of them. (CNN 12/4/2007) According to the Israeli news outlet Ha’aretz, “Israel has known about the report for more than a month. The first information on it was passed on to Defense Minister Ehud Barak, and to Shaul Mofaz, who is the minister responsible for the strategic dialog with the Americans. The issue was also discussed at the Annapolis summit by Barak and US Secretary of Defense Robert Gates, and it seems also between Bush and Prime Minister Ehud Olmert.” (Harel 12/5/2007)