This page can be viewed at http://www.historycommons.org/entity.jsp?entity=eileen_murphy_1

Eileen Murphy was a participant or observer in the following events:

After 9:37 a.m. September 11, 2001: Some Witnesses Surprised by Lack of Plane Debris at the Pentagon 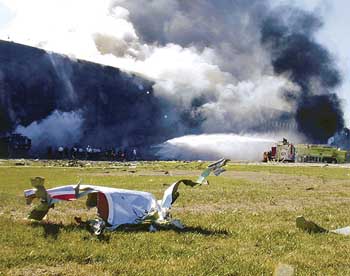 This piece of metal, apparently showing the red, white, and blue stripes worn by American Airlines, is said to be a piece of wreckage from Flight 77. [Source: Associated Press]Some emergency responders and other witnesses are surprised at the lack of major plane debris at the Flight 77 crash site at the Pentagon:

Brian Ladd of the Fort Myer Fire Department arrives at the scene a few minutes after the attack. Yet, “Expecting to see pieces of the wings or fuselage,” he instead reportedly sees “millions of tiny pieces” of debris spread “everywhere.” (Goldberg et al. 2007, pp. 68)

Captain John Durrer of the Metropolitan Washington Airports Authority Fire Department also arrives within minutes of the crash. He will later recall thinking: “Well where’s the airplane, you know, where’s the parts to it? You would think there’d be something.” Reportedly, “The near total disintegration of the plane had left only a multitude of bits scattered outside the building.” (Goldberg et al. 2007, pp. 70)

Sergeant Ronald Galey, a helicopter pilot with the US Park Police, arrives over the Pentagon in his helicopter within minutes of the attack (see Shortly After 9:37 a.m. September 11, 2001). He will describe what he sees there: “[I]t was a relatively small hole in the side of the building. I’m going, ‘This couldn’t possibly have been a 757.’ There’s absolutely nothing that you could identify as an aircraft part anywhere around there. Nothing. Just couldn’t have been.” Galey will add, “I just can’t emphasize enough, the initial damage, looking at it, it just didn’t look like a 757 hit that building.” (Galey 11/20/2001)

Sergeant Keith Bohn, another Park Police helicopter pilot, lands his helicopter near the crash site shortly after the attack. He will recall: “When I landed on the scene, there was actually a particular slit into the side of the Pentagon, which is hard to believe that an aircraft made it, but it’s that small of a slit.… I could not see any aviation parts. I couldn’t see an engine or a wing. There was just rubble, pieces, small pieces.” (Bohn 11/19/2001)

Steve DeChiaro, the president of a New Jersey technology firm, had just arrived at the Pentagon when it was hit and ran toward the crash site. He will recall: “But when I looked at the site, my brain could not resolve the fact that it was a plane because it only seemed like a small hole in the building. No tail. No wings. No nothing.” (Alessi and Sprengelmeyer 8/1/2002)

Early in the afternoon, CNN Pentagon correspondent Jamie McIntyre reports: “[T]he only pieces left that you can see are small enough that you can pick up in your hand. There are no large tail sections, wing sections, fuselage, nothing like that anywhere around, which would indicate that the entire plane crashed into the side of the Pentagon and then caused the side to collapse.” (CNN 9/11/2001)

Sheryl Alleger, a Navy officer at the Pentagon, goes past the crash site in an ambulance in the afternoon. She will recall: “[Y]ou couldn’t see any bits of the airplane, that was the thing that got me.… I expected to see the tail sticking out.… But—nothing. It was like the building swallowed the plane.” (Hilton 2002, pp. 143)

Eileen Murphy, a nurse at the Pentagon’s DiLorenzo Tricare Health Clinic, will recall: “I expected to see the airplane, so I guess my initial impression was: ‘Where’s the plane? How come there’s not a plane?’ I would have thought the building would have stopped it and somehow we would have seen something like part of, or half of the plane, or the lower part, or the back of the plane. So it was just a real surprise that the plane wasn’t there.” (Office of Medical History 9/2004, pp. 96)

Sergeant Reginald Powell, a radiologist at the DiLorenzo Tricare Health Clinic, will say: “I was in awe that I saw no plane, nothing left from the plane. It was like it disintegrated as it went into the building.” (Office of Medical History 9/2004, pp. 119)

Captain Dennis Gilroy, acting commander of the Fort Myer Fire Department, reportedly “wondered why he saw no aircraft parts” when he arrives at the scene. (Goldberg et al. 2007, pp. 68)
Other witnesses will say they come across some pieces of plane debris:

Rich Fitzharris, an electrical engineer working at the Pentagon, later remembers seeing “small pieces of debris, the largest of which might have been part of an engine shroud.” (Mlakar et al. 1/2003, pp. 13

Allyn Kilsheimer, a structural engineer who arrives at the Pentagon at about 5:00 p.m., will recall: “I picked up parts of the plane with the airline markings on them. I held in my hand the tail section of the plane.” (Chertoff et al. 3/2005; Goldberg et al. 2007, pp. 100)
Later on during the day, the FBI arranges a search of the lawn in front of the crash site. According to the Defense Department’s book about the Pentagon attack: “Although much of the plane disintegrated within the Pentagon, the searchers found many scraps and a few personal items widely scattered on the grass and heliport. Plane remnants varied from half-dollar size to a few feet long.” (Goldberg et al. 2007, pp. 159) Also, one photo will show what appears to be plane debris on the lawn in front of the Pentagon, with the red, white, and blue stripes of American Airlines. (Knight Ridder 4/28/2002)