This page can be viewed at http://www.historycommons.org/entity.jsp?entity=elizabeth_egloff_1

Elizabeth Egloff was a participant or observer in the following events: 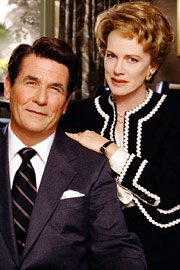 Publicity photo from ‘The Reagans’ miniseries, with James Brolin and Judy Davis as Ronald and Nancy Reagan. [Source: Time]Conservative pundits react with outrage over reports that CBS will air a documentary miniseries about former President Ronald Reagan and his family, titled The Reagans, that contains controversial, and sometimes unsourced, material some feel is unflattering to Reagan and his family. Rush Limbaugh, Sean Hannity, the Wall Street Journal op-ed page, and many commentators on Fox News object so strongly that CBS eventually alters the content of the movie and shunts it out of its lineup entirely (it will instead air on CBS’s cable provider Showtime). The movie was produced by people who “hate Reagan,” Limbaugh charges. Hannity poses the rhetorical question: “Does the whole episode expose the Reagan-hating, liberal-leaning tendencies of the mainstream press?… CBS has a history of Reagan-bashing.” The Journal observes: “[W]hat caused this particular network wall to come tumbling down was largely the new media: [the] Drudge [Report], cable, talk radio, and so on. Not only did the new media disseminate information about the script to CBS viewers, it also provided the viewers, via the immediacy of e-mail, the means to ensure that [CBS chairman Leslie] Moonves would feel their pain.” (Jamieson and Cappella 2008, pp. 72-73) Conservative pundit Pat Buchanan predicted, “Advertisers will bail on CBS’ anti-Reagan movie,” in the days before CBS’s decision. Conservative MSNBC pundit and columnist Robert Novak said of the miniseries: “CBS is serving up a new version of the Ronald Reagan story, just before Thanksgiving. That’s appropriate. With all the Hollywood liberals involved, it could be a real turkey.” And the conservative watchdog organization Media Research Center (MRC) launched a boycott targeting CBS’s potential advertisers. It decided to take action, calling on 100 major companies to review the script and consider avoiding buying ad time on the miniseries. MRC founder Brent Bozell wrote, “‘The Reagans’ appears to be a blatantly unfair assault on the legacy of one of America’s greatest leaders.” In an interview, Bozell said: “Reagan is being portrayed as a hateful, half-nut homophobe. It’s not that the historical record is being distorted. It’s that the makers of the movie are deliberately defaming him and lying about him.” None of the pundits and critics have seen any more than a brief clip CBS provided for publicity purposes.
Fictionalized Conversation - One portion of the miniseries, concerning Reagan’s position on AIDS victims, features at least some fiction. Reagan is portrayed as “uncaring and judgmental” towards AIDS patients, says a CBS News article, and in the script, Reagan turns down his wife Nancy’s plea to help them, saying, “They that live in sin shall die in sin.” Lead author Elizabeth Egloff admitted that she has no documentation of Reagan ever saying such. However, Egloff said, “we know he ducked the issue over and over again, and we know she was the one who got him to deal with that.” Reagan insiders deny Egloff’s characterization. Reportedly Nancy Reagan is angry about the miniseries.
Re-Editing for 'Fair'ness - Moonves recently told a CNBC interviewer: “Nobody’s seen the film. So any criticism now, in the middle of October for a film that isn’t finished, is rather odd, we think.” He admitted that the film was being re-edited “to present a fair picture of the Reagans.… There are things we like about the movie, there are things we don’t like about the movie, there are things we think go too far.” (CBS News 10/29/2003)
Son Speaks Out - Conservative pundit Michael Reagan, the former president’s son, celebrates the decision, calling the documentary a “smear job on my dad” and writing that to most “Hollywood liberals,” apparently including the filmmakers, “[c]onservatives, in their twisted minds, are sworn enemies of progress and everything else that’s good and decent in Hollywood’s view, you know, good things like abortion and gay Boy Scout scoutmasters and Communist dictators such as their hero Fidel Castro.… [T]he elitist liberals at CBS fall right in line with this leftist garbage, and, as they did in this instance, allowed Hollywood the liberty of creating an attack vehicle against my dad and my family and then claiming it was an historical documentary that portrays the Reagans as they really are.” Like many other conservatives, Reagan seems particularly displeased that James Brolin, the husband of liberal Hollywood star Barbra Streisand, plays his father. (Reagan 11/5/2009)